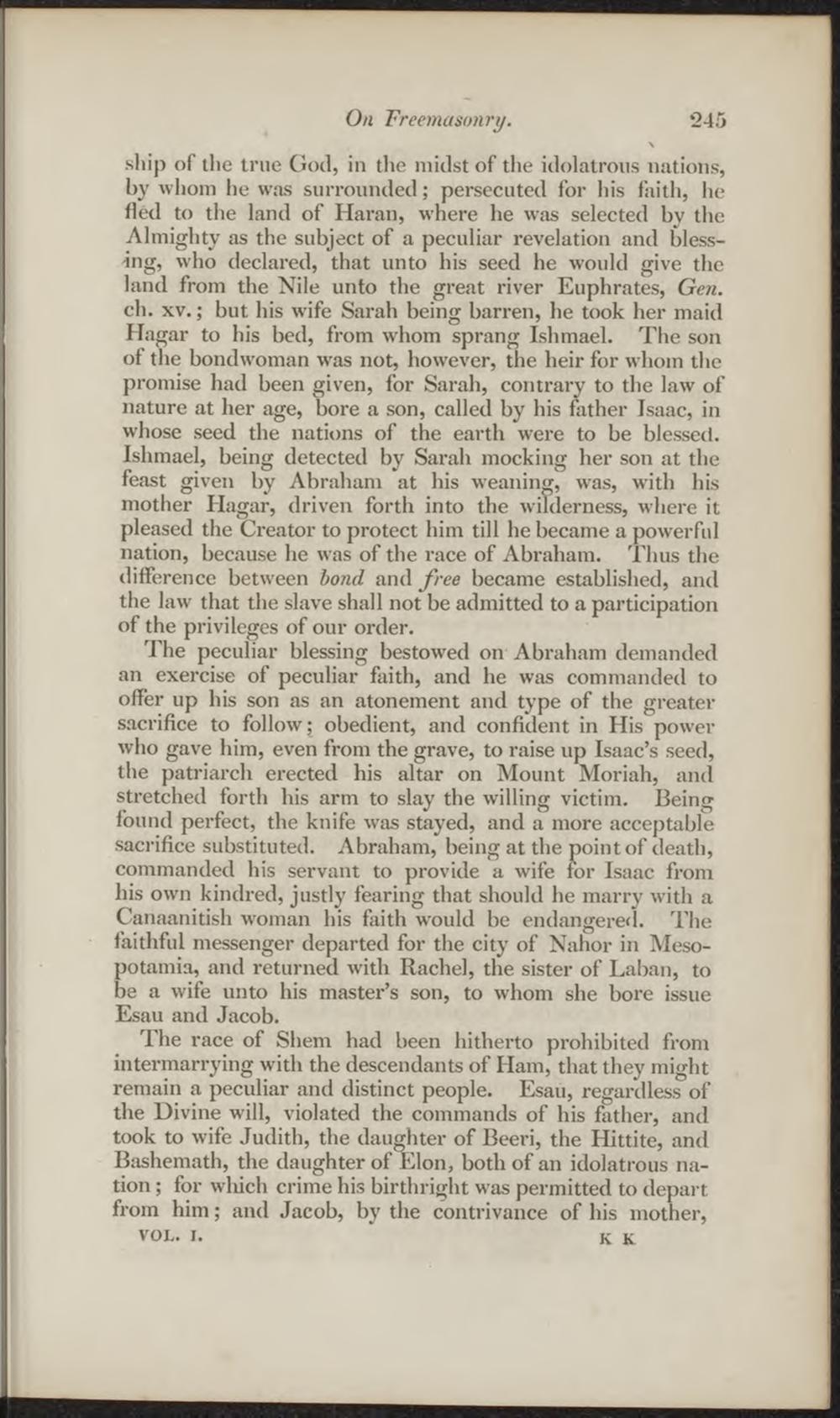 sliip of the true God, in the midst of the idolatrous nations, by wliom he was surrounded; persecuted for his faith, he fled to the land of Haran, where he was selected by the Almighty as the subject of a peculiar revelation and blessing, who declared, that unto his seed he would give the land from the Nile unto the great river Euphrates, Gen. ch. xv.; but his wife Sarah being barren, he took her maid Hagar to his bed, from whom sprang Ishmael. The son of the bondwoman was not, however, the heir for whom the promise had been given, for Sarah, contrary to the law of nature at her age, bore a son, called by his father Isaac, in whose seed the nations of the earth were to be blessed. Ishmael, being detected by Sarah mocking her son at the feast given by Abraham at his weaning, was, with his mother Hagar, driven forth into the wilderness, where it pleased the Creator to protect him till he became a powerful nation, because he was of the race of Abraham. Thus the difference between bond and free became established, and the law that the slave shall not be admitted to a participation of the privileges of our order.

The peculiar blessing bestowed on Abraham demanded an exercise of peculiar faith, and he was commanded to offer up his son as an atonement and type of the greater sacrifice to follow; obedient, and confident in His power who gave him, even from the grave, to raise up Isaac's seed, the patriarch erected his altar on Mount Moriah, and stretched forth his arm to slay the willing victim. Being found perfect, the knife was stayed, and a more acceptable sacrifice substituted. Abraham, being at the pointof death, commanded his servant to provide a wife for Isaac from his own kindred, justly fearing that should he marry with a Canaanitish woman his faith would be endangered. The faithful messenger departed for the city of Nahor in Mesopotamia, and returned with Rachel, the sister of Laban, to be a wife unto his master's son, to whom she bore issue Esau and Jacob.

The race of Shem had been hitherto prohibited from intermarrying with the descendants of Ham, that they might remain a peculiar and distinct people. Esau, regardless of the Divine will, violated the commands of his father, and took to wife Judith, the daughter of Beeri, the Hittite, and Bashemath, the daughter of Elon, both of an idolatrous nation ; for wliich crime his birthright was permitted to depart from him; and Jacob, by the contrivance of his mother,