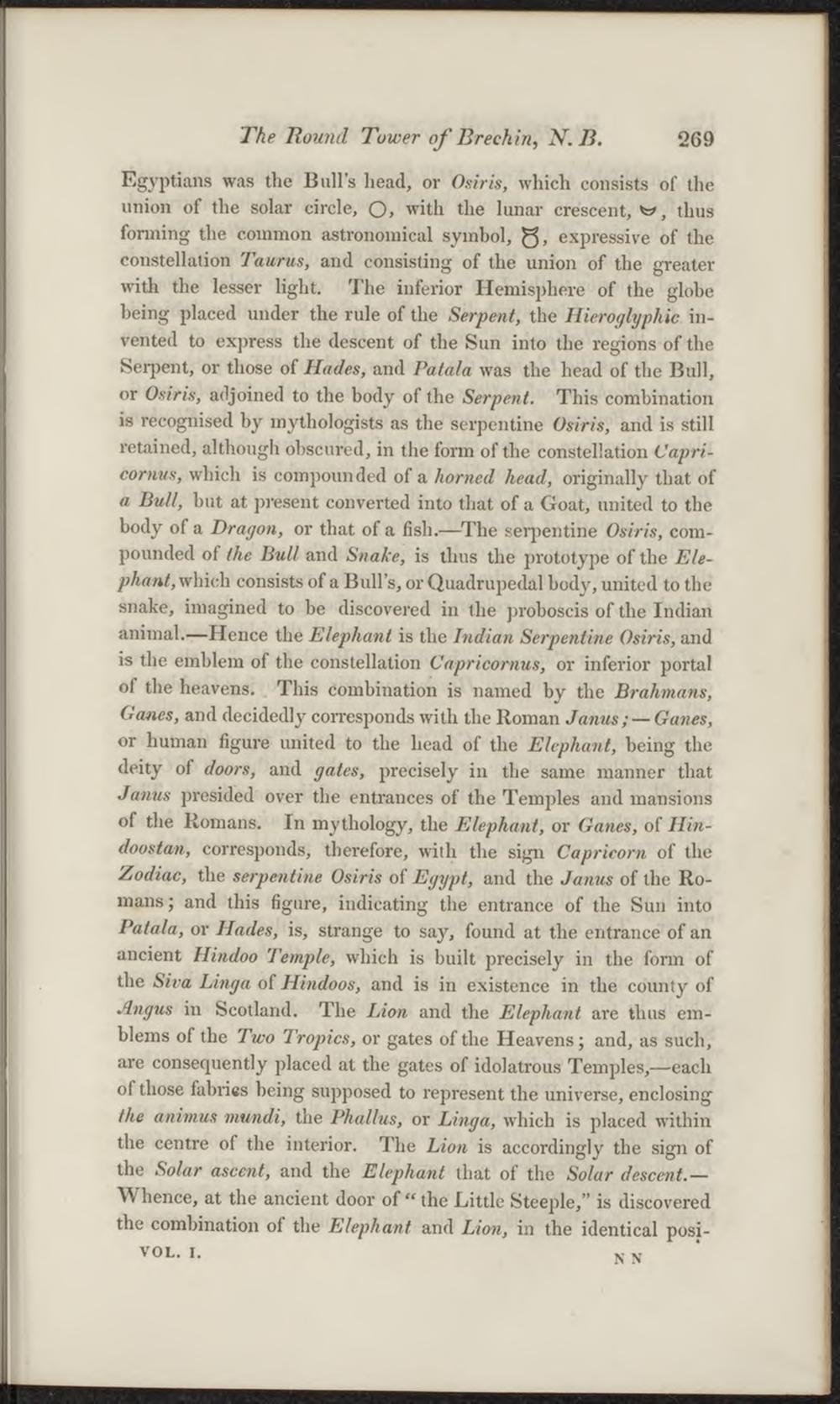 Egyptians was the Bull's head, or Osiris, which consists of the utiion of the solar circle, O, with the lunar crëscent, *=>, thus forming the common astronomical symbol, g, expressive of the constellation Taurus, and consisting of the union of the greater with the lesser light. The inferior Hemisphere of the globe being placed under the rule of the Serpent, the Hieroglyphic invented to express the descent of the Sun into the regions of the Serpent, or those of Hades, and Patala was the head of the Buil, or Osiris, adjoined to the body of the Serpent. This combination is recognised by mythologists as the serpentine Osiris, and is still retained, although obscured, in the form of the constellation Capricornus, which is compounded of a horned head, originally tbat of a Buil, hut at present converted into that of a Goat, united to the body of a Dragon, or that of a fish.—The serpentine Osiris, compounded of the Buil and Snake, is thus the prototype of the Elephant,vi hich consists of a Bull's, or Quadrupedal body, united to the snake, imagined to be discovered in the proboscis of the Indian anirnal.—Hence the Elephant is the Indian Serpentine Osiris, and is the emblem of the constellation Capricornus, or inferior portal oi the heavens. This combination is named by the Brahmans, Ganes, and decidedly corresponds with the Roman Janus ; — Ganes, or human figure united to the head of the Elephant, being the deity of doors, and gates, precisely in the same manner that Janus presided over the entrances of the Temples and mansions of the Romans. In mytliology, the Elephant, or Ganes, of Hindoostan, corresponds, therefore, with the sign Capricorn of the Zodiac, the serpentine Osiris of Egypt, and the Janus of the Romans ; and this figure, indicating the entrance of the Sun into Patala, or Hades, is, strange to say, found at the entrance of an ancient Hindoo Temple, which is built precisely in the form of the Siva Linga of Hindoos, and is in existence in the county of Angus in Scotland. The Lion and the Elephant are thus emblems of the Two Tropics, or gates of the Heavens; and, as such, are consequently placed at the gates of idolatrous Temples,—eacli of those fabries being supposed to represent the universe, enclosing the animus mundi, the Phallus, or Linga, which is placed within the centre of the interior. The Lion is accordingly the sign of the Solar ascent, and the Elephant that of the Solar descent.— Whence, at the ancient door of " the Little Steeple," is discovered the combination of the Elephant and Lion, in the identical posi-