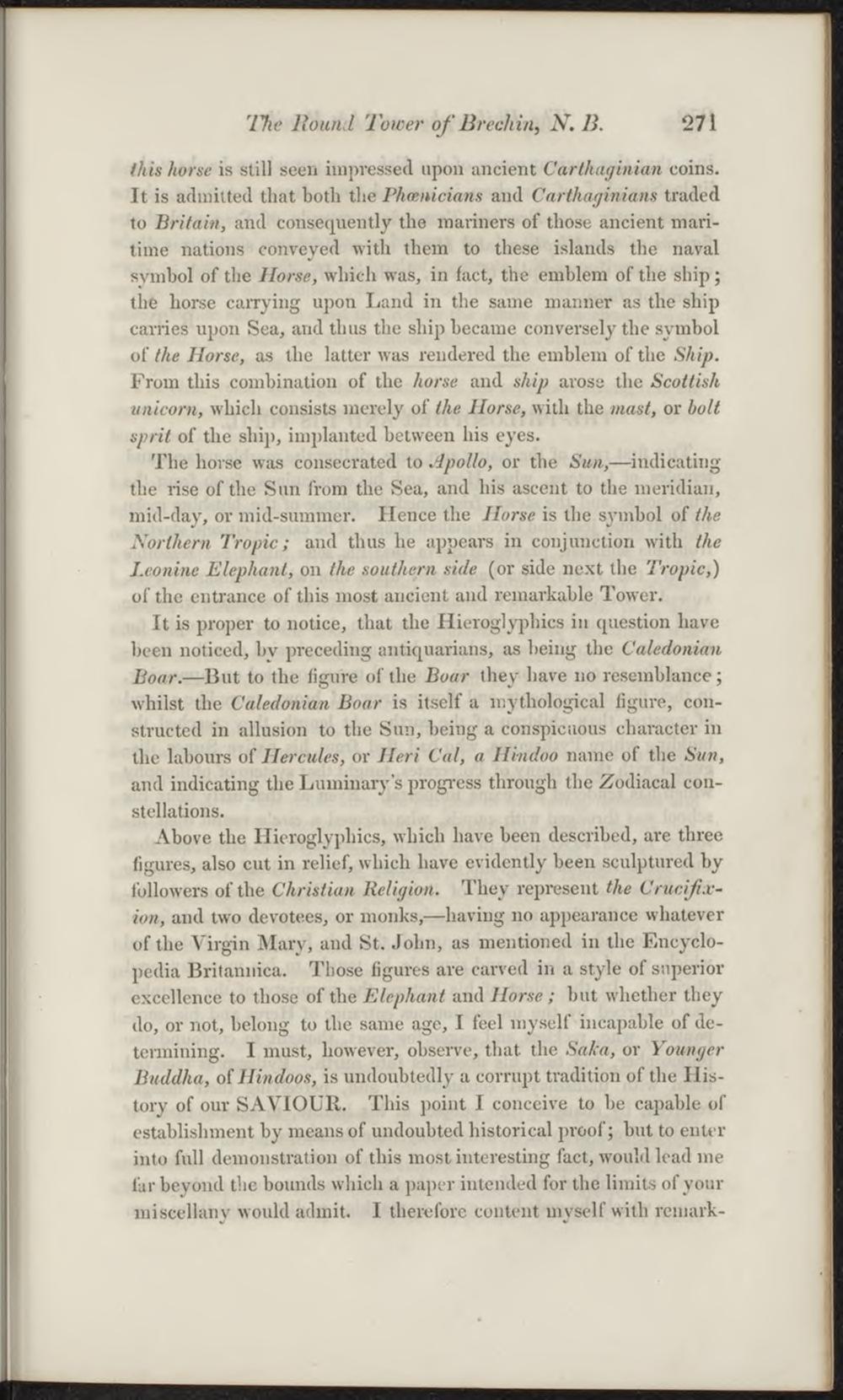 ik is horse is still seen impvessed upon ancient Carthaginian coins. It is admitted tliat botli the Phatiiicians and Carthaginians traded to Britain, and consequently the mariners of those ancient maritime nations conveyed with them to these islands tlie naval svmbol of tlie Horse, wliicli was, in fact, the emblem of the ship ; the horse carrying upon Land in tlie same manner as the ship carries upon Sea, and thus the ship became conversely the symbol of the Horse, as the latter was rendered the emblem of the Ship. From tliis combination of the horse and ship aross the Scottish utiicorn, wliicli consists merely of the Horse, with the mast, or bolt sprit of the ship, implanted between bis eyes.

The horse was consecrated to Apollo, or the Sun,—indicating the rise of the Sun from the Sea, and liis ascent to the meridian, mid-day, or mid-summer. Hence the Horse is tlie s3-mbol of the Northern Tropic; and thus lie uppears in conjunction with the I.eonine Elephant, 011 the southern s'ule (or side next the Tropic,) of the entrance of tliis most ancient and remarkable Tower.

It is proper to notice, that the Hieroglypliics in question have been noticed, by preceding antiquarians, as being the Caledonian Boar.—But to the figure of the Boar they have 110 resemblance; whilst the Caledonian Boar is itself a mythological figure, constructed in allusion to the Sun, being a conspieuous character in the labours of Hercules, or Heri Cal, a Hindoo name of tlie Sun, and indicating the Luminary's progress through the Zodiacal constellations.

Above tlie Hieroglypliics, wliicli have been described, are three figures, also cut in relief, wliich have evidently been sculptured by followers of the Christian Religion. They represent the Crucifixion, and two devotees, or monks,—liaving no appearance whatever of the Virgin Marv, and St. Jolin, as mentioned in the Encyclopedia Britannica. Tliose figures are carved in a style of superior excellence to those of the Elephant and Horse ; but whether they do, or not, belong to the same age, I feel myself incapable of determining. I must, however, ohserve, that the Saka, or Younger Buddha, of Hindoos, is undoubtedly a corrupt tradition of the Ilistory of our SAYIOUR. Tliis point I conceive to be capable of establishment by means of undoubted historical proof; but to enter into full demonstration of tliis most interesting fact, would lead 111e 1'ar beyond the bounds wliicli a paper intended for the limits of your miscellany would admit. I therefore content myself with remark-