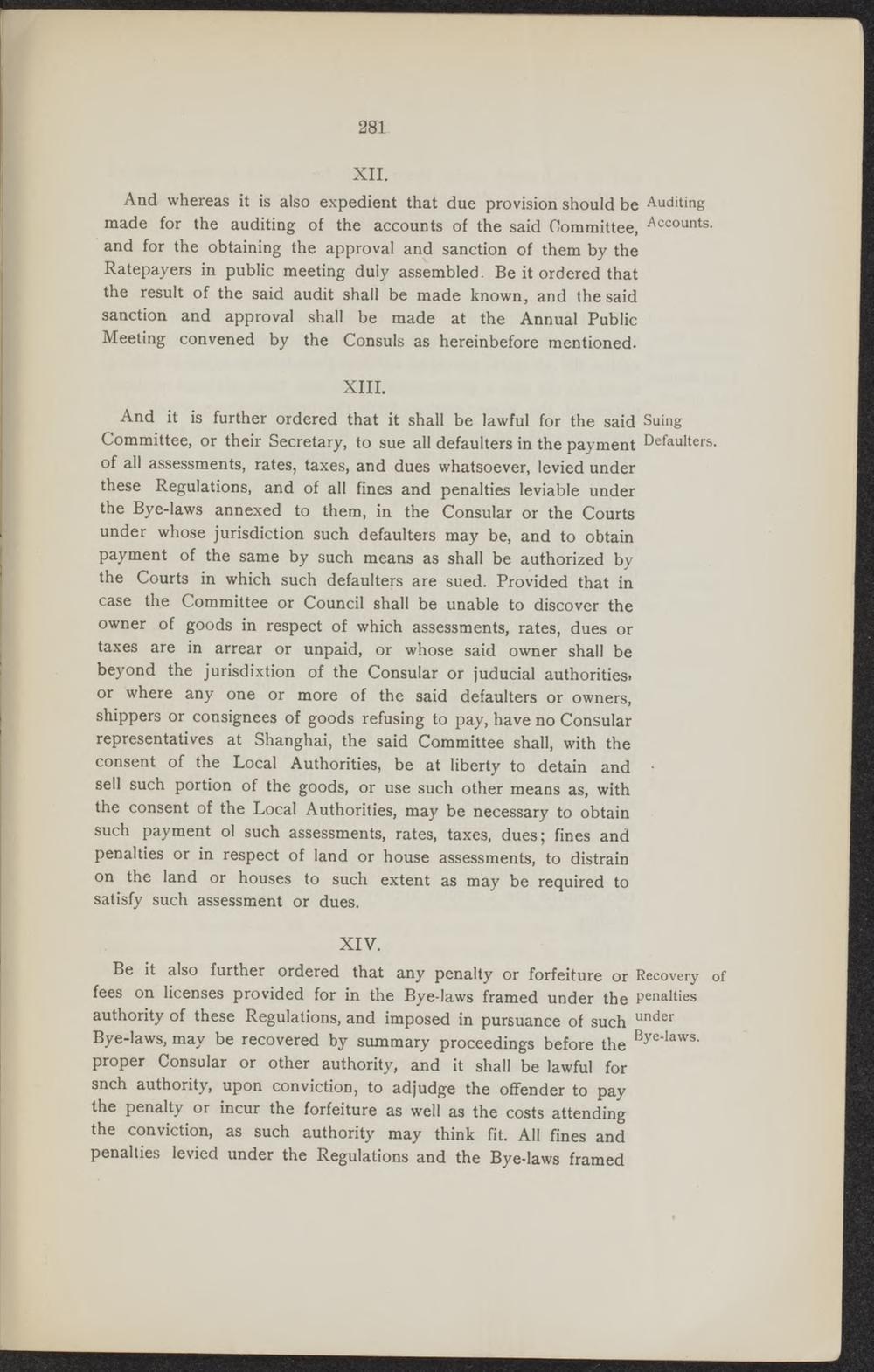 And whereas it is also expediënt that due provision should be Auditing made for the auditing of the accounts of the said Committee, Accounts. and for the obtaining the approval and sanction of them by the Ratepayers in public meeting duly assembled Be it ordered that the result of the said audit shall be made known, and the said sanction and approval shall be made at the Annual Public Meeting convened by the Consuls as hereinbefore mentioned.

And it is further ordered that it shall be lawful for the said Suing Committee, or their Secretary, to sue all defaulters in the payment Defaulters. of all assessments, rates, taxes, and dues whatsoever, levied under these Regulations, and of all fines and penalties leviable under the Bye-laws annexed to them, in the Consular or the Courts under whose jurisdiction such defaulters may be, and to obtain payment of the same by such means as shall be authorized by the Courts in which such defaulters are sued. Provided that in case the Committee or Council shall be unable to discover the owner of goods in respect of which assessments, rates, dues or taxes are in arrear or unpaid, or whose said owner shall be beyond the jurisdixtion of the Consular or juducial authoritiesi or where any one or more of the said defaulters or owners, shippers or consignees of goods refusing to pay, have no Consular representatives at Shanghai, the said Committee shall, with the consent of the Local Authorities, be at liberty to detain and sell such portion of the goods, or use such other means as, with the consent of the Local Authorities, may be necessary to obtain such payment ol such assessments, rates, taxes, dues; fines and penalties or in respect of land or house assessments, to distrain on the land or houses to such extent as may be required to satisfy such assessment or dues.

Be it also further ordered that any penalty or forfeiture or Recovery of fees on licenses provided for in the Bye-laws framed under the penalties authority of these Regulations, and imposed in pursuance of such under Bye-laws, may be recovered by summary proceedings before the Bye_lawsproper Consular or other authority, and it shall be lawful for snch authority, upon conviction, to adjudge the offender to pay the penalty or incur the forfeiture as well as the costs attending the conviction, as such authority may think fit. All fines and penalties levied under the Regulations and the Bye-laws framed