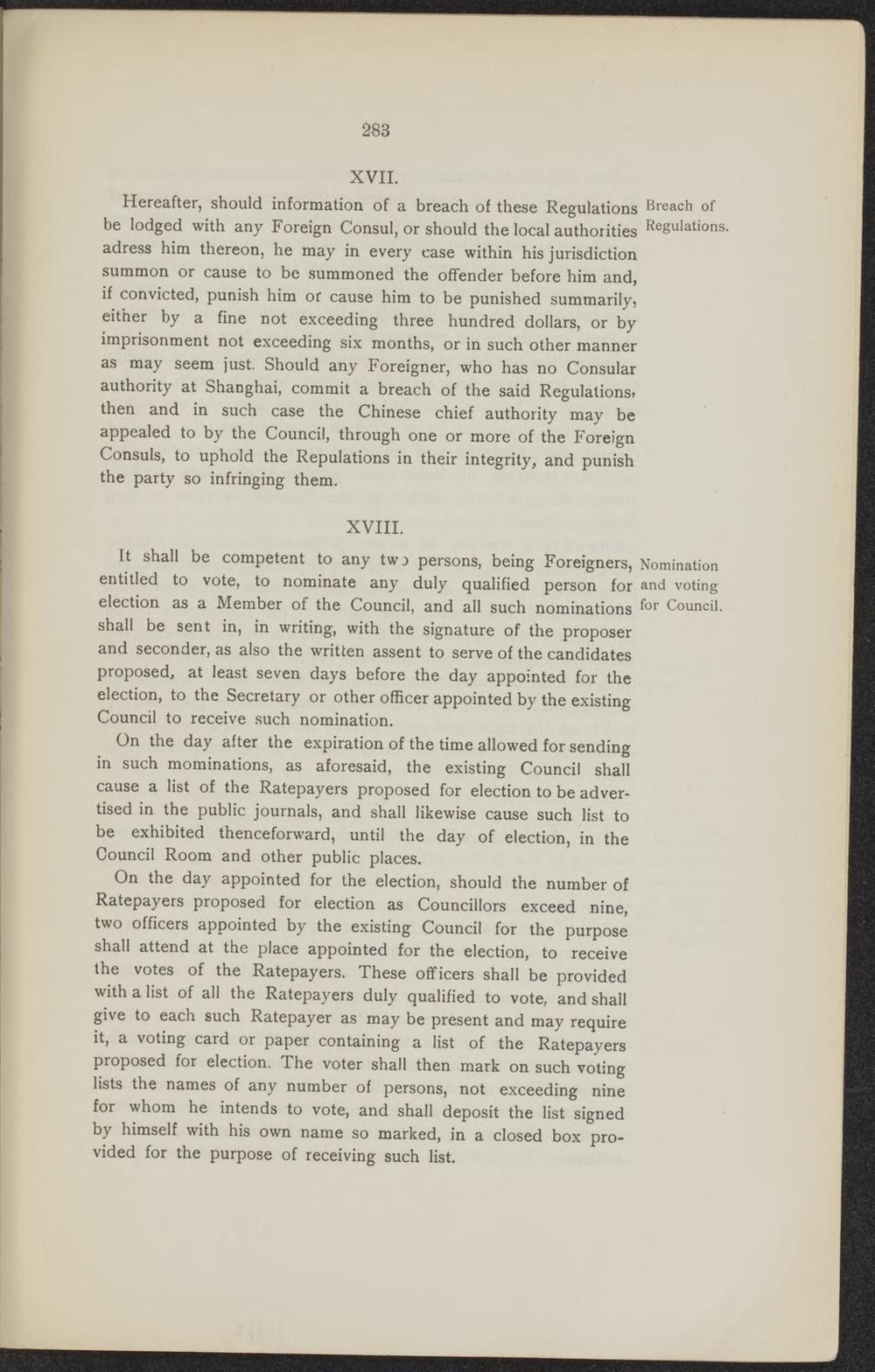 Hereafter, should information of a breach of these Regulations Breach of be lodged with any Foreign Consul, or should the local authorities Regulations. adress him thereon, he may in every case within his jurisdiction summon or cause to be summoned the offender before him and, if convicted, punish him or cause him to be punished summarily, either by a fine not exceeding three hundred dollars, or by imprisonment not exceeding six months, or in such other manner as may seem just. Should any Foreigner, who has no Consular authority at Shanghai, commit a breach of the said Regulations, then and in such case the Chinese chief authority may be appealed to by the Council, through one or more of the Foreign Consuls, to uphold the Repulations in their integrity, and punish the party so infringing them.

It shall be competent to any twj persons, being Foreigners, Nomination entitled to vote, to nominate any duly qualified person for and voting election as a Member of the Council, and all such nominations for Council. shall be sent in, in writing, with the signature of the proposer and seconder, as also the written assent to serve of the candidates proposed, at least seven days before the day appointed for the election, to the Secretary or other officer appointed by the existing Council to receive such nomination.

On the day after the expiration of the time allowed for sending in such mominations, as aforesaid, the existing Council shall cause a list of the Ratepayers proposed for election to be advertised in the public journals, and shall likewise cause such list to be exhibited thenceforward, until the day of election, in the Council Room and other public places.

On the day appointed for the election, should the number of Ratepayers proposed for election as Councillors exceed nine, two officers appointed by the existing Council for the purpose shall attend at the place appointed for the election, to receive the votes of the Ratepayers. These officers shall be provided with a list of all the Ratepayers duly qualified to vote, and shall give to each such Ratepayer as may be present and may require it, a voting card or paper containing a list of the Ratepayers proposed for election. The voter shall then mark on such voting lists the names of any number of persons, not exceeding nine for whom he intends to vote, and shall deposit the list signed by himself with his own name so marked, in a closed box provided for the purpose of receiving such list.