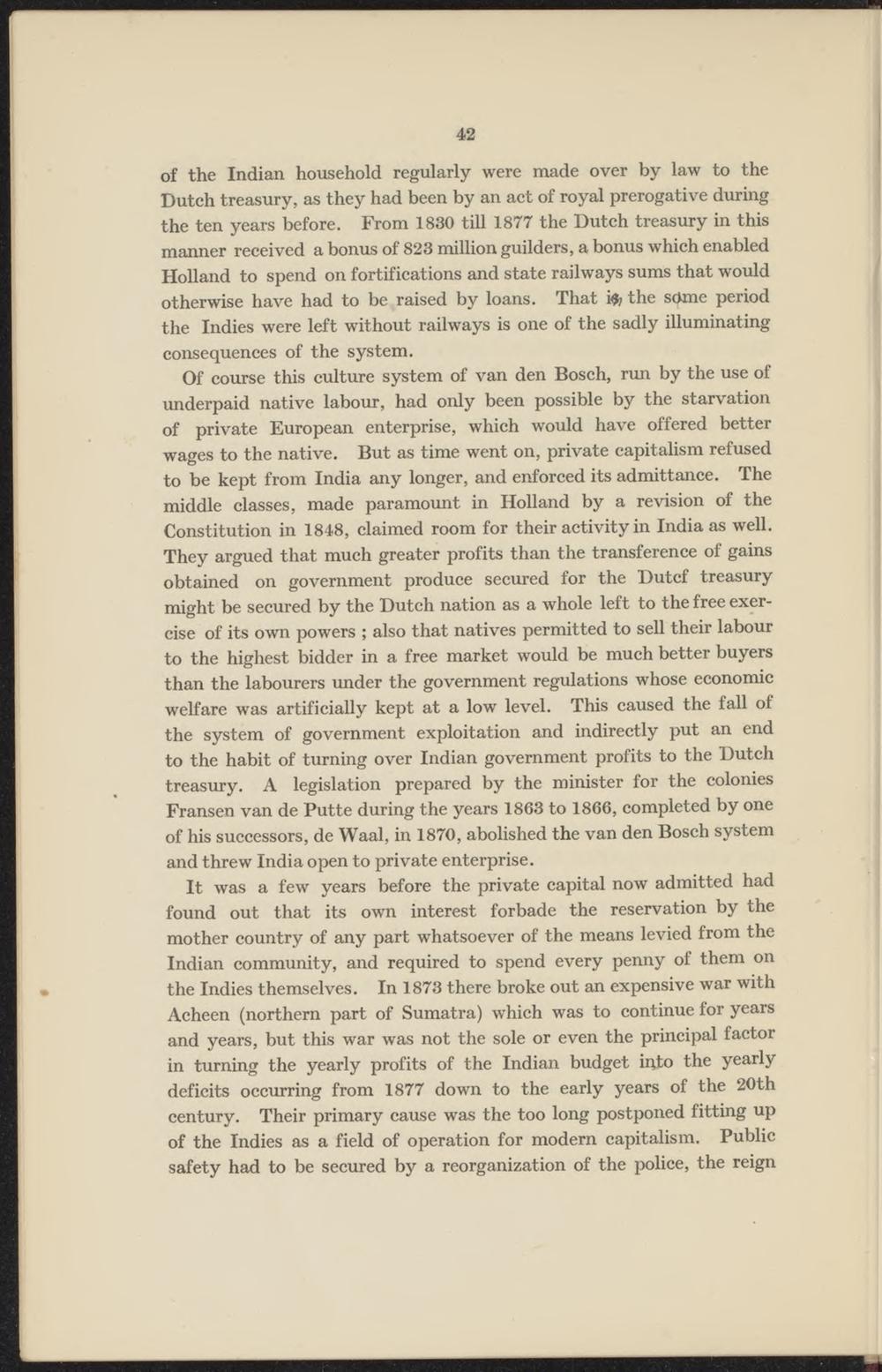 of the Indian household regularly were made over by law to the Dutch treasury, as they had been by an act of royal prerogative during the ten years before. From 1830 till 1877 the Dutch treasury in this marmer received a bonus of 828 million guilders, a bonus which enabled Holland to spend on fortifications and state railways sums that would otherwise have had to be,raised by loans. That i* the sclme period the Indies were left without railways is one of the sadly üluminating consequences of the system.

Of course this culture system of van den Bosch, run by the use of underpaid native labour, had only been possible by the starvation of private European enterprise, which would have offered better wages to the native. But as time went on, private capitalism refused to be kept from India any longer, and enforced its admittance. The middle classes, made paramount in Holland by a revision of the Constitution in 1848, claimed room for their activity in India as well. They argued that much greater profits than the transference of gains obtained on government produce secured for the Dutef treasury might be secured by the Dutch nation as a whole left to the free exercise of its own powers ; also that natives permitted to sell their labour to the highest bidder in a free market would be much better buyers than the labourers under the government regulations whose economie welfare was artificially kept at a low level. This caused the fall of the system of government exploitation and indirectly put an end to the habit of turning over Indian government profits to the Dutch treasury. A legislation prepared by the minister for the colonies Fransen van de Putte during the years 1863 to 1866, completed by one of his suceessors, de Waal, in 1870, abolished the van den Bosch system and threw India open to private enterprise.

It was a few years before the private capital now admitted had found out that its own interest forbade the reservation by the mother country of any part whatsoever of the means levied from the Indian community, and required to spend every penny of them on the Indies themselves. In 1878 there broke out an expensive war with Acheen (northem part of Sumatra) which was to continue for years and years, but this war was not the sole or even the principal factor in turning the yearly profits of the Indian budget into the yearly deficits occurring from 1877 down to the early years of the 20th century. Their primary cause was the too long postponed fitting up of the Indies as a field of operation for modern capitalism. Public safety had to be secured by a reorganization of the police, the reign