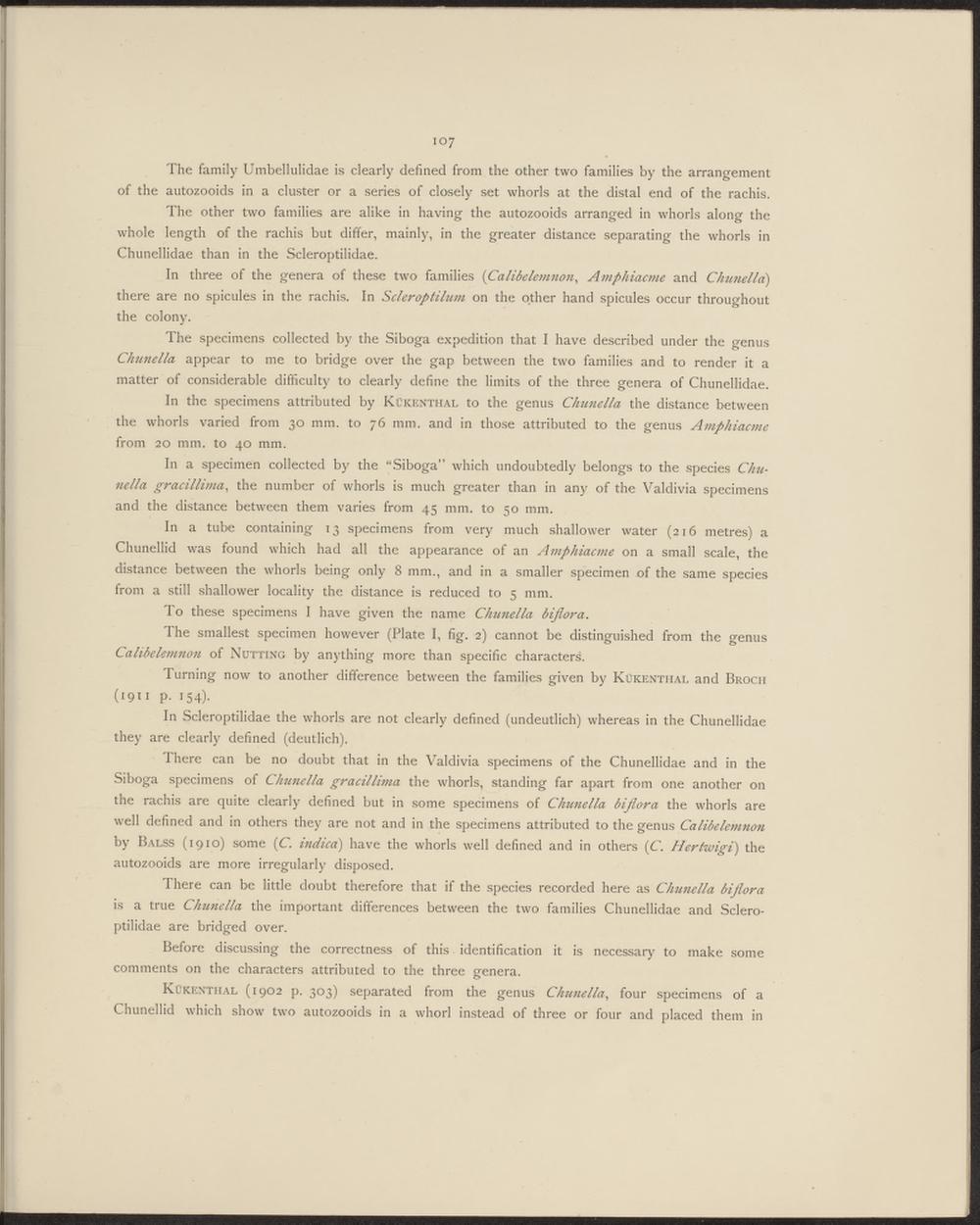 The family Umbellulidae is clearly defined from the other two families by the arrangement of the autozooids in a cluster or a series of closely set whorls at the distal end of the rachis.

The other two families are alike in having the autozooids arranged in whorls along the whole length of the rachis but differ, mainly, in the greater distance separating the whorls in Chunellidae than in the Scleroptilidae.

In three of the genera of these two families (Calibelemnon, Amphiacme and Chunella) there are no spicules in the rachis. In Scleroptilum on the other hand spicules occur throughout the colony.

The specimens collected by the Siboga expedition that I have described under the genus Chunella appear to me to bridge over the gap between the two families and to render it a matter of considerable difficulty to clearly define the limits of the three genera of Chunellidae.

In the specimens attributed by Kükenthal to the genus Chunella the distance between the whorls varied from 30 mm. to 76 mm. and in those attributed to the genus Amphiacme from 20 mm. to 40 mm.

In a specimen collected by the "Siboga" which undoubtedly belongs to the species Chunella gracillima, the number of whorls is much greater than in any of the Valdivia specimens and the distance between them varies from 45 mm. to 50 mm.

In a tube containing 13 specimens from very much shallower water (216 metres) a Chunellid was found which had all the appearance of an Amphiacme on a small scale, the distance between the whorls being only 8 mm., and in a smaller specimen of the same species from a still shallower locality the distance is reduced to 5 mm.

To these specimens I have given the name Chunella bifiora.

The smallest specimen however (Plate I, fig. 2) cannot be distinguished from the genus Calibelemnon of Nutting by anything more than specific characters.

Turning now to another difference between the families given by Kükenthal and Broch (1911 p. 154).

There can be little doubt therefore that if the species recorded here as Chunella bifiora is a true Chunella the important differences between the two families Chunellidae and Scleroptilidae are bridged over.

Before discussing the correctness of this identification it is necessary to make some comments on the characters attributed to the three genera.

Kükenthal (1902 p. 303) separated from the genus Chunella, four specimens of a Chunellid which show two autozooids in a whorl instead of three or four and placed them in