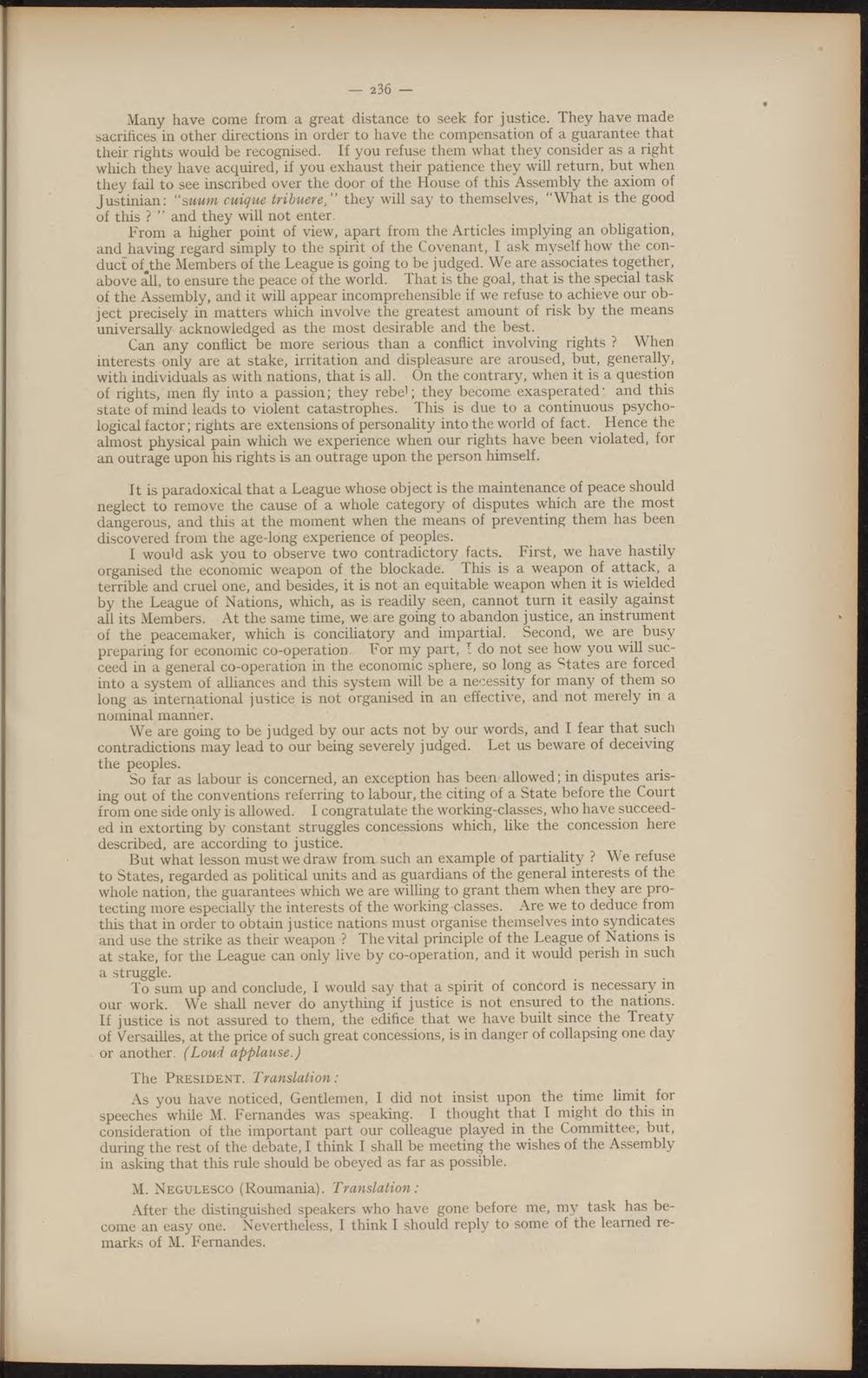 Many have come from a great distance to seek for justice. They have made sacrifices in other directions in order to have the compensation of a guarantee that their rights would be recognised. If you refuse them what they consider as a right which they have acquired, if you exhaust their patience they will return, but when they fail to see inscribed over the door of the House of this Assembly the axiom of Justinian: "suum cuique tribuere," they will say to themselves, "What is the good of this ? '' and they will not enter.

From a higher point of view, apart from the Articles implying an obligation, and having regard simply to the spirit of the Covenant, I ask myself how the conducf of .the Members of the League is going to be judged. We are associates together, above all, to ensure the peace of the world. That is the goal, that is the special task of the Assembly, and it will appear incomprehensible if we refuse to achieve our object precisely in matters which involve the greatest amount of risk by the means universally acknowledged as the most désirable and the best.

Can any conflict be more serious than a conflict involving rights ? When interests only are at stake, irritation and displeasure are aroused, but, generally, with individuals as with nations, that is all. On the contrary, when it is a question of rights, men fly into a passion; they rebel; they become exasperated' and this state of mind leads to violent catastrophes. This is due to a continuous psychological factor; rights are extensions of personality into the world of fact. Hence the almost physical pain which we experience when our rights have been violated, for an outrage upon his rights is an outrage upon the person himself.

It is paradoxical that a League whose object is the maintenance of peace should neglect to remove the cause of a whole category of disputes which are the most dangerous, and this at the moment when the means of preventing them has been discovered from the age-ldng experience of peoples.

I would ask you to observe two contradictory facts. First, we have hastily organised the economie weapon of the blockade. This is a weapon of attack, a terrible and cruel one, and besides, it is not an équitable weapon when it is wielded by the League of Nations, which, as is readily seen, cannot turn it easily against all its Members. At the same time, we are going to abandon justice, an instrument of the peacemaker, which is conciliatory and impartial. Second, we are busy preparing for economie co-operation. For my part, T do not see how you will succeed in a general co-operation in the economie sphère, so long as States are forced into a system of alhances and this system will be a necessity for many of them so long as international justice is not organised in an effective, and not merely in a nominal manner.

We are going to be judged by our acts not by our words, and I fear that such contradictions may lead to our being severely judged. Let us beware of deceiving the peoples.

So far as labour is concerned, an exception has been allowed; in disputes arising out of the conventions referring to labour, the citing of a State before the Court from one side only is allowed. I congratulate the working-classes, who have succeeded in extorting by constant struggles concessions which, like the concession here described, are according to justice.

But what lesson must we draw from such an example of partiality ? We refuse to States, regarded as political units and as guardians of the general interests of the whole nation, the guarantees which we are willing to grant them when they are protecting more especially the interests of the working-classes. Are we to deduce from this that in order to obtain justice nations must organise themselves into syndicates and use the strike as their weapon ? The vital principle of the League of Nations is at stake, for the League can only live by co-operation, and it would perish in such a struggle.

To sum up and conclude, I would say that a spirit of conCord is necessary in our work. We shall never do anything if justice is not ensured to the nations. If justice is not assured to them, the edifice that we have built since the Treaty of Versailles, at the price of such great concessions, is in danger of collapsing one day or another. (Loud applause.)

As you have noticed, Gentlemen, I did not insist upon the time limit for speeches while M. Fernandes was speaking. I thought that I might do this in consideration of the important part our colleague played in the Committee, but, during the rest of the debate, I think I shall be meeting the wishes of the Assembly in asking that this rule should be obeyed as far as possible.

After the distinguished speakers who have gone before me, my task has become an easy one. Nevertheless, I think I should reply to some of the learned remarks of M. Fernandes.