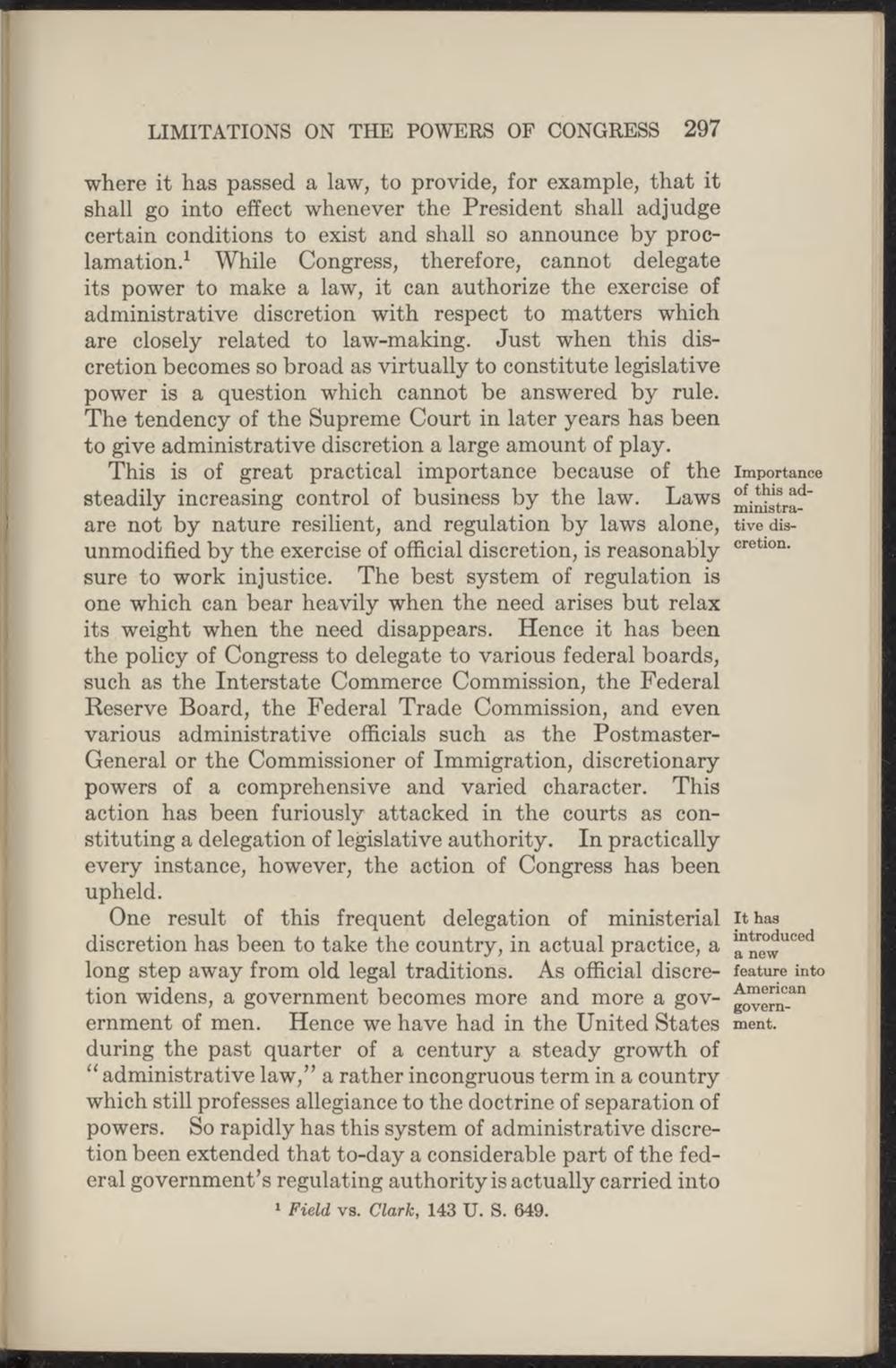 LIMITATIONS ON THE POWERS OF CONGRESS 297

where it has passed a law, to provide, for example, that it shall go into effect whenever the President shall adjudge certain conditions to exist and shall so announce by proclamatïon.1 While Congress, therefore, cannot delegate its power to make a law, it can authorize the exercise of administrative discretion with respect to matters which are closely related to law-making. Just when this discretion becomes so broad as virtually to constitute legislative power is a question which cannot be answered by rule. The tendency of the Suprème Court in later years has been to give administrative discretion a large amount of play.

This is of great practical importance because of the steadily increasing control of business by the law. Laws are not by nature resihent, and regulation by laws alone, unmodified by the exercise of official discretion, is reasonably sure to work injustice. The best system of regulation is one which can bear heavily when the need arises but relax its weight when the need disappears. Hence it has been the pohcy of Congress to delegate to various federal boards, such as the Interstate Commerce Commission, the Federal Reserve Board, the Federal Trade Commission, and even various adniinistrative officials such as the PostmasterGeneral or the Commissioner of Immigration, discretionary powers of a comprehensive and varied character. This action has been furiously attacked in the courts as constituting a delegation of legislative authority. In practicaüy every instance, however, the action of Congress has been upheld.

One result of this frequent delegation of ministerial discretion has been to take the country, in actual practice, a long step away from old legal traditions. As official discretion widens, a government becomes more and more a government of men. Hence we have had in the United States during the past quarter of a century a steady growth of " administrative law," a rather incongruous term in a country which still professes allegiance to the doctrine of separation of powers. So rapidly has this system of administrative discretion been extended that to-day a considerable part of the federal government's regulating authority is actually carried into 1 Field vs. Clark, 143 U. S. 649.

Importance of this administrative discretion.

It has introduced a new