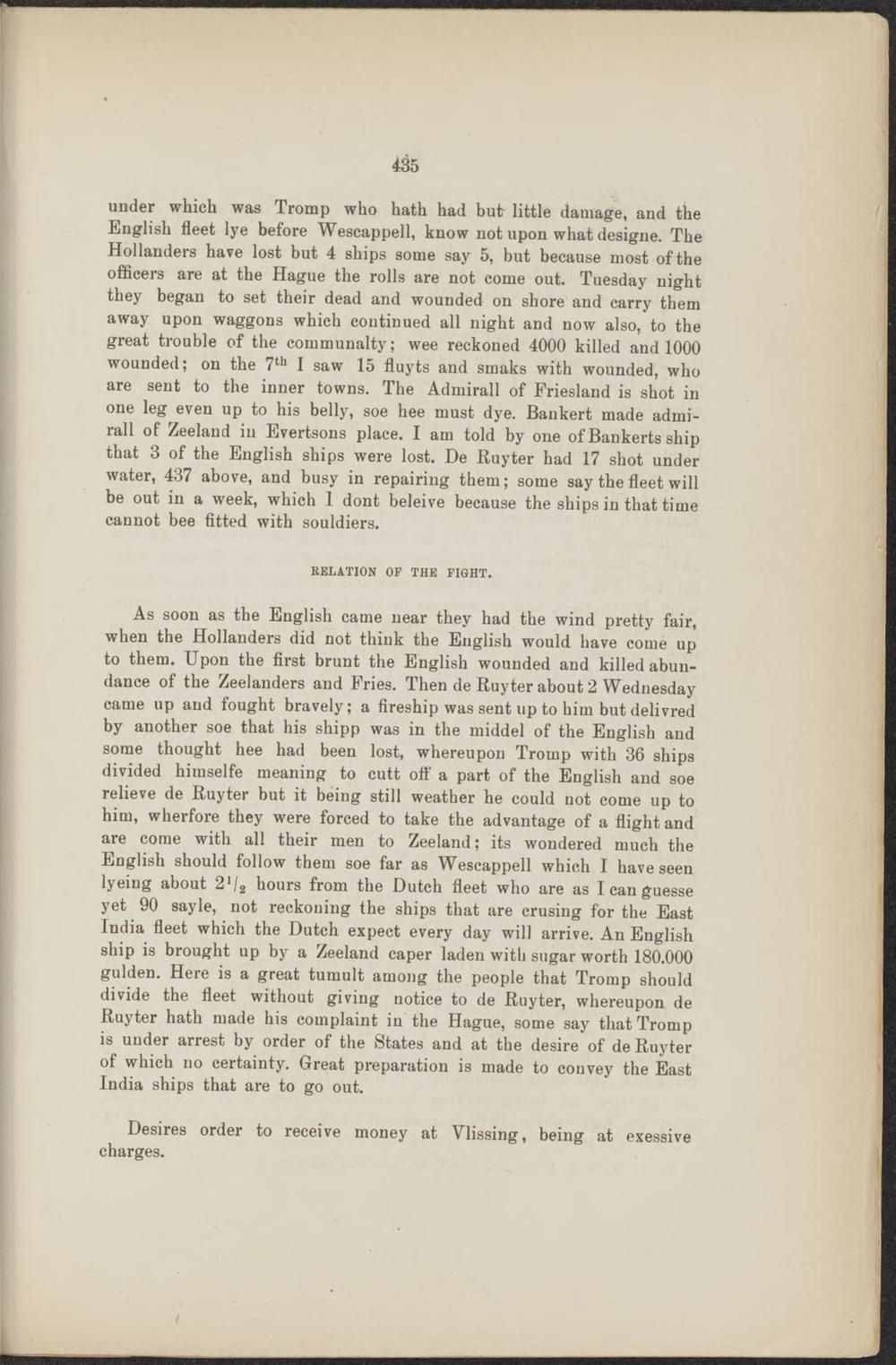 under which was Tromp who hath had but- little damage, and the English fleet lye before Wescappell, know not upon what designe. The Hollanders haye lost but 4 ships some say 5, but because most of the officers are at the Hague the rolls are not come out. Tuesday night they began to set their dead and wounded on shore and carry them away upon waggons which continued all night and now also, to the great trouble of the communalty; wee reckoned 4000 killed and 1000 wounded; on the 7th I saw 15 fluyts and smaks with wounded, who are sent to the inner towns. The Admirall of Friesland is shot in one leg even up to his belly, soe hee must dye. Bankert made admirall of Zeeland iu Evertsons place. I am told by one of Bankerts ship that 3 of the English ships were lost. De Ruyter had 17 shot under water, 437 above, and busy in repairing them; some say the fleet will be out in a week, which 1 dont beleive because the ships in that time cannot bee fitted with souldiers.

As soon as the English came near they had the wind pretty fair, when the Hollanders did not think the English would have come up to them. Upon the first brunt the English wounded and killed abundance of the Zeelanders and Fries. Then de Ruyter about 2 Wednesday came up and fought bravely; a fireship was sent up to him but delivred by another soe that his shipp was in the middel of the English and some thought hee had been lost, whereupon Tromp with 36 ships divided himselfe meaning to cutt off a part of the English and soe relieve de Ruyter but it béing still weather he could not come up to him, wherfore they were forced to take the advantage of a flight and are come with all their men to Zeeland; its wondered much the English should follow them soe far as Wescappell which I have seen lyeing about 2'/g hours from the Dutch fleet who are as Icanguesse yet 90 sayle, not reckoning the ships that are crusing for the East India fleet which the Dutch expect every day will arrivé. An English ship is brought up by a Zeeland caper laden with sugar worth 180.000 gulden. Here is a great tumult among the people that Tromp should divide the fleet without giving notice to de Ruyter, whereupon de Ruyter hath made his complaint in the Hague, some say that Tromp is under arrest by order of the States and at the desire of de Ruyter of which no certainty. Great preparation is made to convey the East India ships that are to go out.

Desires order to receive money at Vlissing, being at exessive charges.