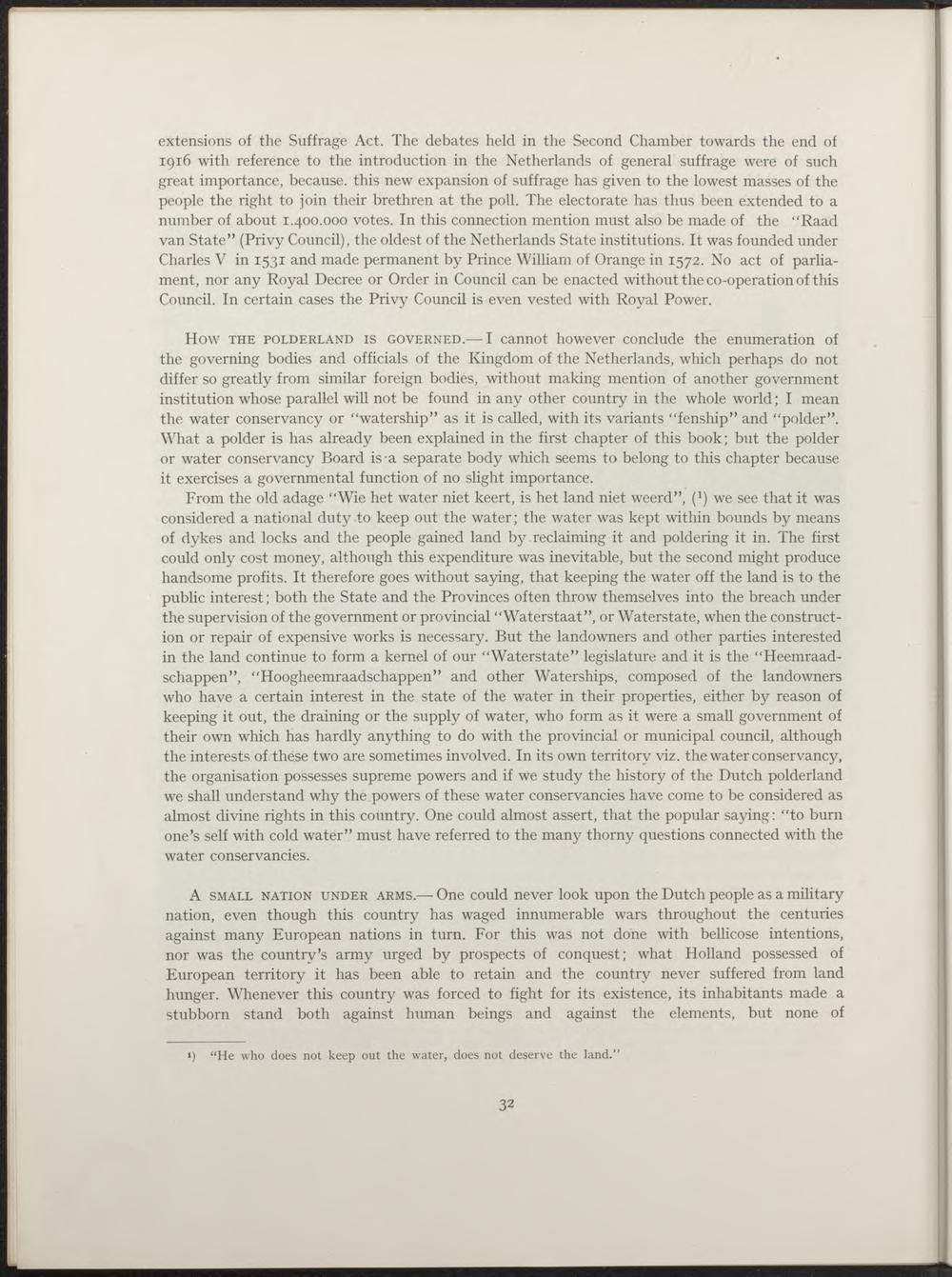 extensions of the Suffrage Act. The debates held in the Second Chamber towards the end of 1916 with reference to the introduction in the Netherlands of general suffrage were of such great importance, because. this new expansion of suffrage has given to the lowest masses of the people the right to join their brethren at the poll. The electorate has thus been extended to a number of about 1.400.000 votes. In this connection mention must also be made of the "Raad van State" (Privy Council), the oldest of the Netherlands State institutions. It was founded under Charles V in 1531 and made permanent by Prince William of Orange in 1572. No act of parliament, nor any Royal Decree or Order in Council can be enacted without the co-operation of this Council. In certain cases the Privy Council is even vested with Royal Power.

How the polderland is governed.— I cannot however conclude the enumeration of the governing bodies and officials of the Kingdom of the Netherlands, which perhaps do not differ so greatly from similar foreign bodies, without making mention of another government institution whose parallel will not be found in any other country in the whole world; I mean the water conservancy or "watership" as it is called, with its variants "fenship" and "polder". What a polder is has already been explained in the first chapter of this book; but the polder or water conservancy Board is a separate body which seems to belong to this chapter because it exercises a governmental function of no slight importance.

From the old adage "Wie het water niet keert, is het land niet weerd", (J) we see that it was considered a national dutyto keep out the water; the water was kept within bounds by means of dykes and locks and the people gained land by .reclaiming it and poldering it in. The first could only cost money, although this expenditure was inevitable, but the second might produce handsome profits. It therefore goes without saying, that keeping the water off the land is to the public interest; both the State and the Provinces often throw themselves into the breach under the supervision of the government or provincial "Waterstaat", or Waterstate, when the construction or repair of expensive works is necessary. But the landowners and other parties interested in the land continue to form a kernei of our "Waterstate" legislature and it is the "Heemraadschappen", "Hoogheemraadschappen" and other Waterships, composed of the landowners who have a certain interest in the state of the water in their properties, either by reason of keeping it out, the draining or the supply of water, who form as it were a small government of their own which has hardly anything to do with the provincial or municipal council, although the interests of thése two are sometimes involved. In its own territory viz. the water conservancy, the organisation possesses suprème powers and if we study the history of the Dutch polderland we shall understand why the powers of these water conservancies have come to be considered as almost divine rights in this country. One could almost assert, that the popular saying: "to burn one's self with cold watér" must have referred to the many thorny questions connected with the water conservancies.

A small nation under arms.— One could never look upon the Dutch people as a military nation, even though this country has waged innumerable wars throughout the centuries against many European nations in turn. For this was not done with bellicose intentions, nor was the country's army urged by prospects of conquest; what Holland possessed of European territory it has been able to retain and the country never suffered from land hunger. Whenever this country was forced to fight for its existence, its inhabitants made a stubborn stand both against human beings and against the elements, but none of

i) "He who does not keep out the water, does not deserve the land."