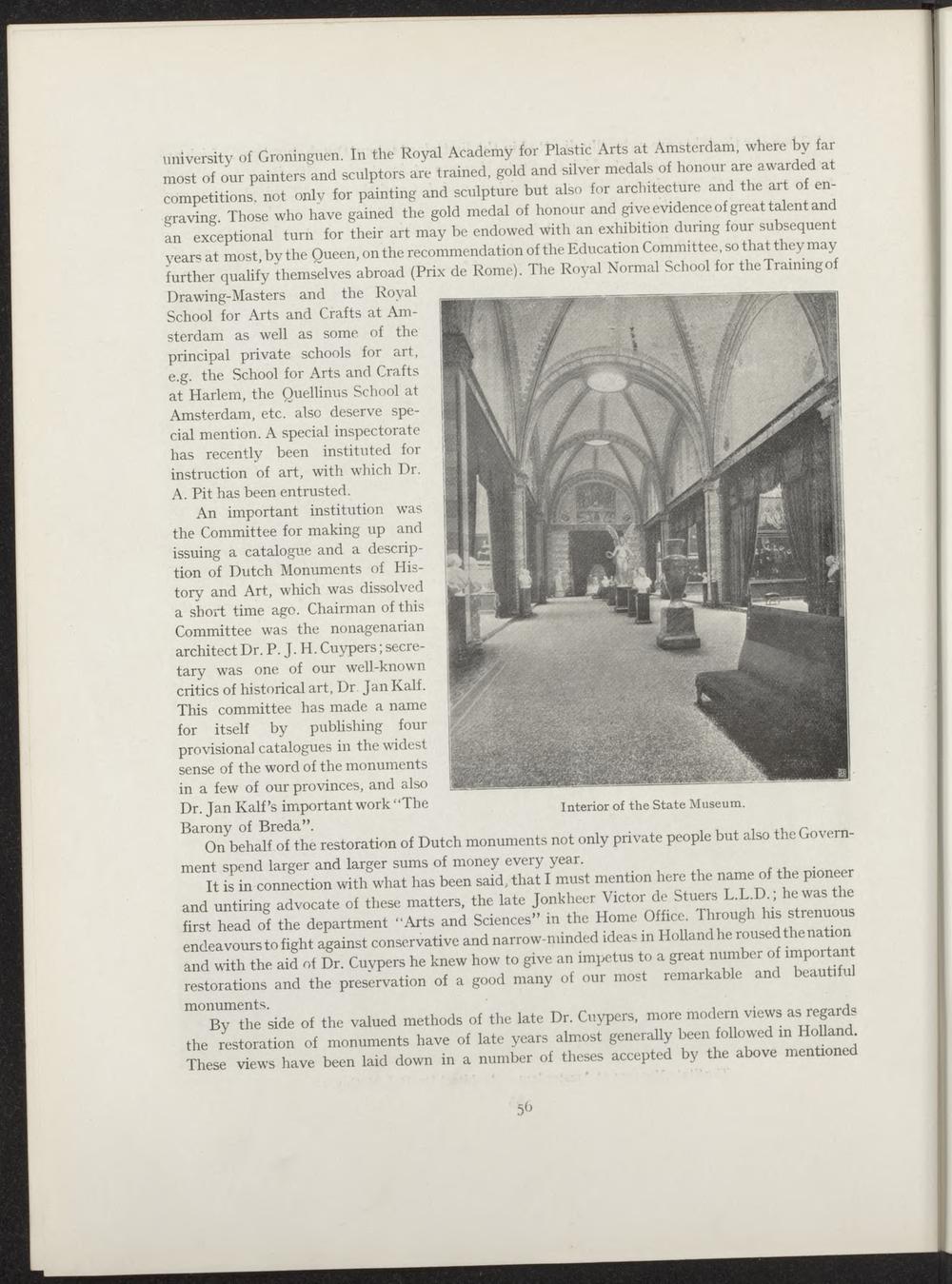 university of Groninguen. In the Royal Academy for Plastic Arts at Amsterdam, where by far most of our painters and sculptors are trained, gold and silver medals of honour are awarded at cdmpetitions not onlv for painting and sculpture but also for archxtecture and the art o engraving Those who have gained the gold medal of honour and give evidence of great talent and an exceptional turn for their art may be endowed with an exhibition during four subsequent vear< at most by the Queen, on the recommendation of the Education Committee, so that they may further qualify themselves abroad (Prix de Rome). The Royal Normal School for theTrainingof

An important institution was the Committee for making up and issuing a catalogue and a description of Dutch Monuments of History and Art, which was dissolved a short time ago. Chairman of this Committee was the nonagenarian architect Dr. P. J. H. Cuypers; secretary was one of our well-known critics of historical art, Dr. Jan Kalf. This committee has made a name for itself by pubhshing four provisional catalogues in the widest sense of the word of the monuments in a few of our provinces, and also Dr. Jan Kalf 's important work "The

BaXYbehalfrof the restoration of Dutch monuments not only private people but also the Government spend larger and larger sums of money every year. ,

t is in connection withwhat has been said, that I must mention here the nameof the pionee and untiring advocate of these matters, the late Jonkheer Victor de Stuers L.LJD he was the first head of the department "Arts and Sciences» in the Home Office. Through his strenuous endeavourstofight against conservative and narrow-nnnded ideasinHoUandherousedthenaüon and with the .id of Dr. Cuypers he knew how to give an impetus to a great number of important restorations and the preservation of a good many of our most remarkable and beautiful

m0BTtheSside of the valued methods of the late Dr. Cuypers, more modern views as regards the restoration of monuments have of late years almost generally been followed in Holland TÏese tews have been laid down in a number of theses accepted by the above mentioned

Interior of the State Museum.