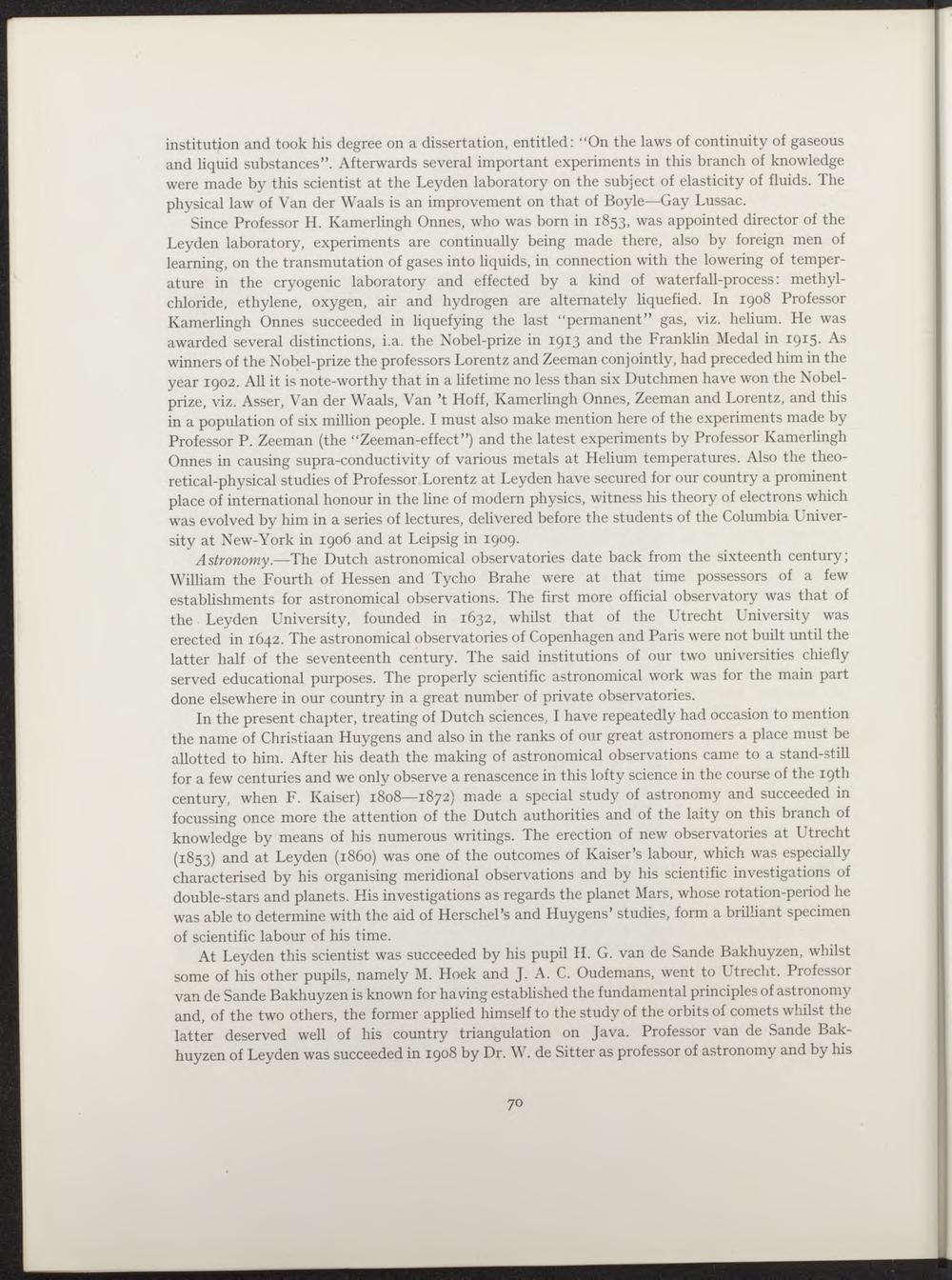 institution and took his degree on a dissertation, entitled: "On the laws of continuity of gaseous and liqüid substances". Afterwards several important experiments in this branch of knowledge were made by this scientist at the Leyden laboratory on the subject of elasticity of fluids. The physical law of Van der Waals is an improvement on that of Boyle—Gay Lussac.

Since Professor H. Kamerlingh Onnes, who was born in 1853, was appointed director of the Leyden laboratory, experiments are continually being made there, also by foreign men of learning, on the transmutation of gases into liquids, in connection with the lowering of temperature in the cryogenic laboratory and effected by a kind of waterfall-process: methylchloride, ethylene, oxygen, air and hydrogen are alternately liquefied. In 1908 Professor Kamerlingh Onnes succeeded in liquefying the last "permanent" gas, viz. helium. He was awarded several distinctions, i.a. the Nobel-prize in 1913 and the Franklin.Medal in 1915. As winners of the Nobel-prize the professors Lorentz and Zeeman conjointly, had preceded him in the year 1902. All it is note-worthy that in a lifetime no less than six Dutchmen have won the Nobelprize, viz. Asser, Van der Waals, Van 't Hoff, Kamerlingh Onnes, Zeeman and Lorentz, and this in a population of six milhon people. I must also make mention here of the experiments made by Professor P. Zeeman (the "Zeeman-effect") and the latest experiments by Professor Kamerlingh Onnes in causing supra-conductivity of various metais at Helium temperatures. Also the theoretical-physical studies of Professor Lorentz at Leyden have secured for our country a prominent place of international honour in the line of modern physics, witness his theory of electrons which was evolved by him in a series of lectures, delivered before the students of the Columbia University at New-York in 1906 and at Leipsig in 1909.

In the present chapter, treating of Dutch sciences, I have repeatedly had occasion to mention the name of Christiaan Huygens and also in the ranks of our great astronomers a place must be allotted to him. After his death the making of astronomical observations came to a stand-still for a few centuries and we only observe a renascence in this lofty science in the course of the I9th century, when F. Kaiser) 1808—1872) made a special study of astronomy and succeeded in focussing once more the attention of the Dutch authorities and of the laity on this branch of knowledge by means of his numerous writings. The erection of new observatories at Utrecht (1853) and at Leyden (1860) was one of the outcomes of Kaiser's labour, which was especially characterised by his organising meridional observations and by his scientific investigations of double-stars and planets. His investigations as regards the planet Mars, whose rotation-period he was able to determine with the aid of Herschel's and Huygens' studies, form a brüliant specimen of scientific labour of his time.