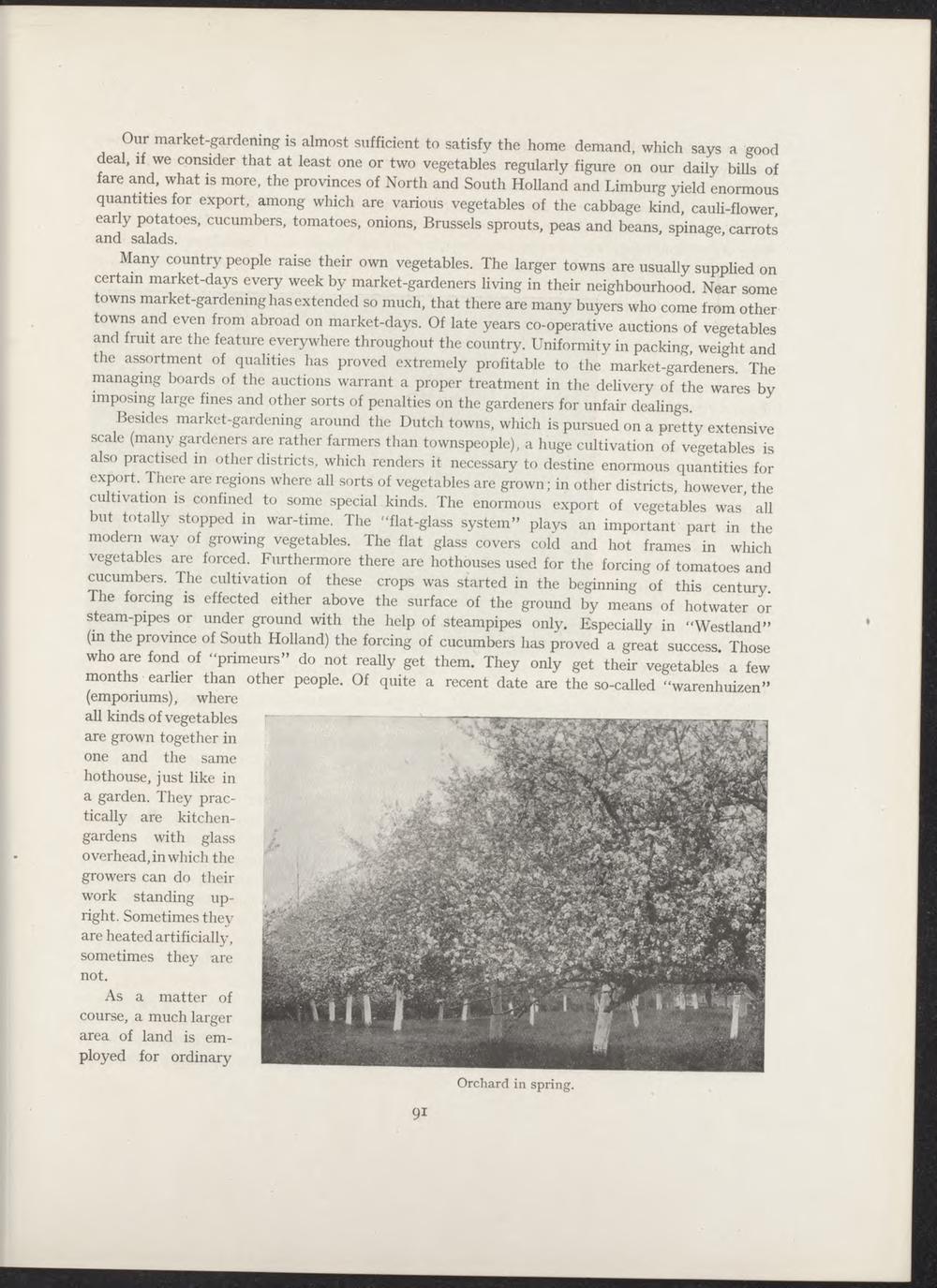 Our market-gardening is almost sufficiënt to satisfy the home demand, which says a good deal, if we cpnsider that at least one or two vegetables regularly figure on our daüy bills of fare and, what is more, the provinces of North and South Holland and Limburg yield enormous quantities for export, among which are various vegetables of the cabbage kind, cauli-flower early potatoes, cucumbers, tomatoes, onions, Brussels sprouts, peas and beans, spinage carrots and salads. '

Many country people raise their own vegetables. The larger towns are usuaUy supplied on certain market-days every week by market-gardeners living in their neighbourhood. Néar some towns market-gardening has extended so much, that there are many buyers who come from other towns and even from abroad on market-days. Of late years co-operative auctions of vegetables and fruit are the feature everywhere throughout the country. Uniformity in packing wei-ht and the assortment of qualities has proved extremely profitable to the market-gardeners The managing boards of the auctions warrant a proper treatment in the delivery of the wares by ïmposmg large fines and other sorts of penalties on the gardeners for unfair dealings

Besides market-gardening around the Dutch towns, which is pursued on a pretty extensive scale (many gardeners are rather farmers than townspeople), a huge cultivation of vegetables is also practised m other districts, which renders it necessary to destine enormous quantities for export. There are regions where all sorts of vegetables are grown; in other districts, however the cultivation is confmed to some special kinds. The enormous export of vegetables was' all but totally stopped in war-time. The "flat-glass system» plays an important part in the modern way of growing vegetables. The flat glass covers cold and hot frames in which vegetables are forced. Furthermore there are hothouses used for the forcing of tomatoes and cucumbers. The cultivation of these crops was started in the beginning of this century The forcing is effected either above the surface of the ground by means of hotwater or steam-pipes or under ground with the help of steampipes only. Especially in "Westland" * (m the province of South Holland) the forcing of cucumbers has proved a great success Those who are fond of "primeurs» do not really get them. They only get their vegetables a few months earlier than other people. Of quite a recent date are the so-called "warenhuizen" (emporiums), where

all kinds of vegetables are grown together in one and the same hothouse, just like in a garden. They practically are kitchengardens with glass overhead, in which the growers can do their work standing upright. Sometimes they are heated artificially, sometimes they are not.

As a matter of course, a much larger area of land is employed for ordinary