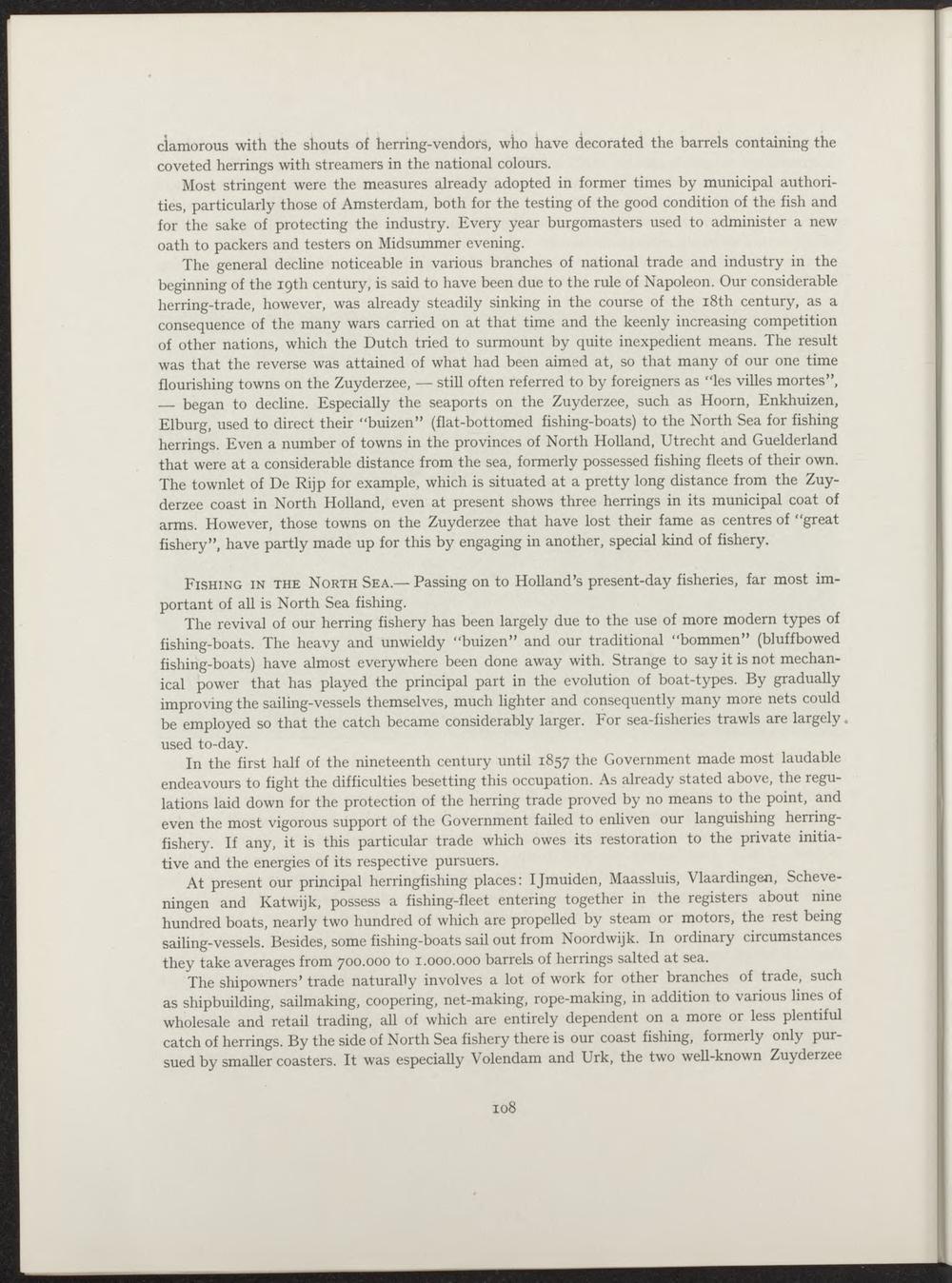 damorous with the shouts of herring-vendofs, who have decorated the barrels containing the ;oveted herrings with streamers in the national colours.

Most stringent were the measures already adopted in former times by municipal authoriies, particularly those of Amsterdam, both for the testing of the good condition of the fish and 'or the sake of protecting the industry. Every year burgomasters used to administer a new jath to packers and testers on Midsummer evening.

The general decline noticeable in various branches of national trade and industry in the seginning of the 19t.l1 century, is said to have been due to the rule of Napoleon. Our considerable lerring-trade, however, was already steadüy sinking in the course of the i8th century, as a xmsequence of the many wars carried on at that time and the keenly increasing competition )f other nations, which the Dutch tried to surmount by quite inexpedient means. The result was that the reverse was attained of what had been aimed at, so that many of our one time Elourishing towns on the Zuyderzee, — still often referred to by foreigners as "les villes mortes", — began to decline. Especially the seaports on the Zuyderzee, such as Hoorn, Enkhuizen, Elburg, used to direct their "buizen" (flat-bottomed fishing-boats) to the North Sea for fishing tierrings. Even a number of towns in the provinces of North Holland, Utrecht and Guelderland that were at a considerable distance from the sea, formerly possessed fishing fleets of their own. The townlet of De Rijp for example, which is situated at a pretty long distance from the Zuyierzee coast in North Holland, even at present shows three herrings in its municipal coat of irms. However, those towns on the Zuyderzee that have lost their fame as centres of "great fishery", have partly made up for this by engaging in another, special kind of fishery.

Fishing in the North Sea.— Passing on to Holland's present-day fisheries, far most important of all is North Sea fishing.

The revival of our herring fishery has been largely due to the use of more modern types of fishing-boats. The heavy and unwieldy "buizen" and our traditional "bommen" (bluffbowed fishing-boats) have almost everywhere been done away with. Strange to say it is not mechanical power that has played the principal part in the evolution of boat-types. By gradually improving the sailing-vessels themselves, much lighter and consequently many more nets could be employed so that the catch became considerably larger. For sea-fisheries trawls are largely. used to-day.

In the first half of the nineteenth century until 1857 the Government made most laudable endeavours to fight the difficulties besetting this occupation. As already stated above, the regulations laid down for the protection of the herring trade proved by no means to the point, and even the most vigorous support of the Government failed to enliven our languishing herringfishery. If any, it is this particular trade which owes its restoration to the private initiative and the energies of its respective pursuers.

At present our principal herringfishing places: IJmuiden, Maassluis, Vlaardingen, Scheveningen and Katwijk, possess a fishing-fleet entering together in the registers about nine hundred boats, nearly two hundred of which are propelled by steam or motors, the rest being sailing-vessels. Besides, some fishing-boats saü out from Noordwijk. In ordinary circumstances they take averages from 700.000 to 1.000.000 barrels of herrings salted at sea.

The shipowners' trade naturally involves a lot of work for other branches of trade, such as shipbuüding, sailmaking, coopering, net-making, rope-making, in addition to various lines of Wholesale and retaü trading, all of which are entirely dependent on a more or less plentiful catch of herrings. By the side of North Sea fishery there is our coast fishing, formerly only pursued by smaller coasters. It was'especially Volendam and Urk, the two well-known Zuyderzee