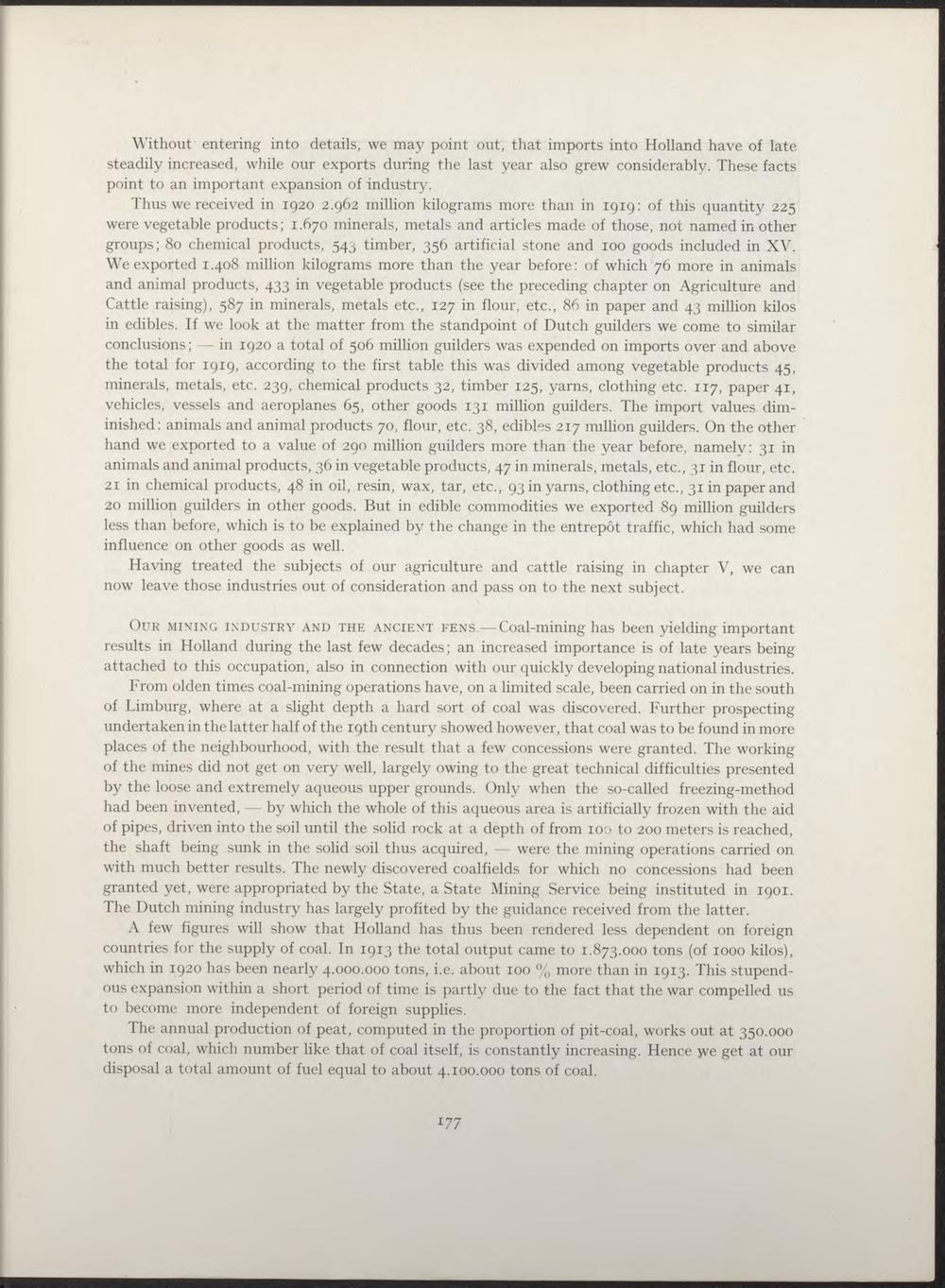 Without entering into details, we may point out, that imports into Holland have of late steadily increased, while our exports during the last year also grew considerably. These facts point to an important expansion of industry.

Thus we received in 1920 2.962 million kilograms more than in 1919: of this quantity 225 were vegetable products; 1.670 minerals, metais and articles made of those, not named in other groups; 80 chemical products, 543 timber, 356 artificial stone and 100 goods included in XV. We exported 1.408 million kilograms more than the year before: of which 76 more in animals and animal products, 433 in vegetable products (see the preceding chapter on Agriculture and Cattle raising), 587 in minerals, metais etc, 127 in flour, etc, 86 in paper and 43 million kilos in edibles. If we look at the matter from the standpoint of Dutch guilders we come to similar conclusions; — in 1920 a total of 506 milhon guilders was expended on imports over and above the total for 1919, according to the first table this was divided among vegetable products 45, minerals, metais, etc. 239, chemical products 32, timber 125, yarns, clothing etc 117, paper 41, vehicles, vessels and aeroplanes 65, other goods 131 million guilders. The import values diminished: animals and animal products 70, flour, etc. 38, edibles 217 million guilders. On the other hand we exported to a value of 290 million guilders more than the year before, namely: 31 in animals and animal products, 36 in vegetable products, 47 in minerals, metais, etc, 31 in flour, etc. 21 in chemical products, 48 in oil, resin, wax, tar, etc, 93 in yarns, clothing etc, 31 in paper and 20 million guilders in other goods. But in edible commodities we exported 89 million guilders less than before, which is to be explained by the change in the entrepot traffic, which had some influence on other goods as well.

Having treated the subjects of our agriculture and cattle raising in chapter V, we can now leave those industries out of consideration and pass on to the next subject.

Our mining industry and the ancient fens.— Coal-mining has been yïelding important results in Holland during the last few decades; an increased importance is of late years being attached to this occupation, also in connection with our quickly developing national industries.

From olden times coal-mining operations have, on a hmited scale, been carried on in the south of Limburg, where at a shght depth a hard sort of coal was discovered. Further prospecting undertaken in the latter half of the I9th century showed however, that coal was to be found in more places of the neighbourhood, with the result that a few concessions were granted. The working of the mines did not get on very well, largely owing to the great technical difficulties presented by the loose and extremely aqueous upper grounds. Only when the so-called freezing-method had been invented, — by which the whole of this aqueous area is artificially frozen with the aid of pipes, driven into the soil until the solid rock at a depth of from 100 to 200 meters is reached, the shaft being sunk in the solid soil thus acquired, — were the mining operations carried on with much better results. The newly discovered coalfields for which no concessions had been granted yet, were appropriated by the State, a State Mining Service being instituted in 1901. The Dutch mining industry has largely profited by the guidance received from the latter.

A few figures wül show that Hoüand has thus been rendered less dependent on foreign countries for the supply of coal. In 1913 the total output came to 1.873.000 tons (of 1000 küos), which in 1920 has been nearly 4.000.000 tons, i.e. about 100 % more than in 1913. This stupendous expansion within a short period of time is partly due to the fact that the war compelled us to become more independent of foreign supplies.

The annual production of peat, computed in the proportion of pit-coal, works out at 350.000 tons of coal, which number hke that of coal itself, is constantly increasing. Hence we get at our disposal a total amount of fuel equal to about 4.100.000 tons of coal.