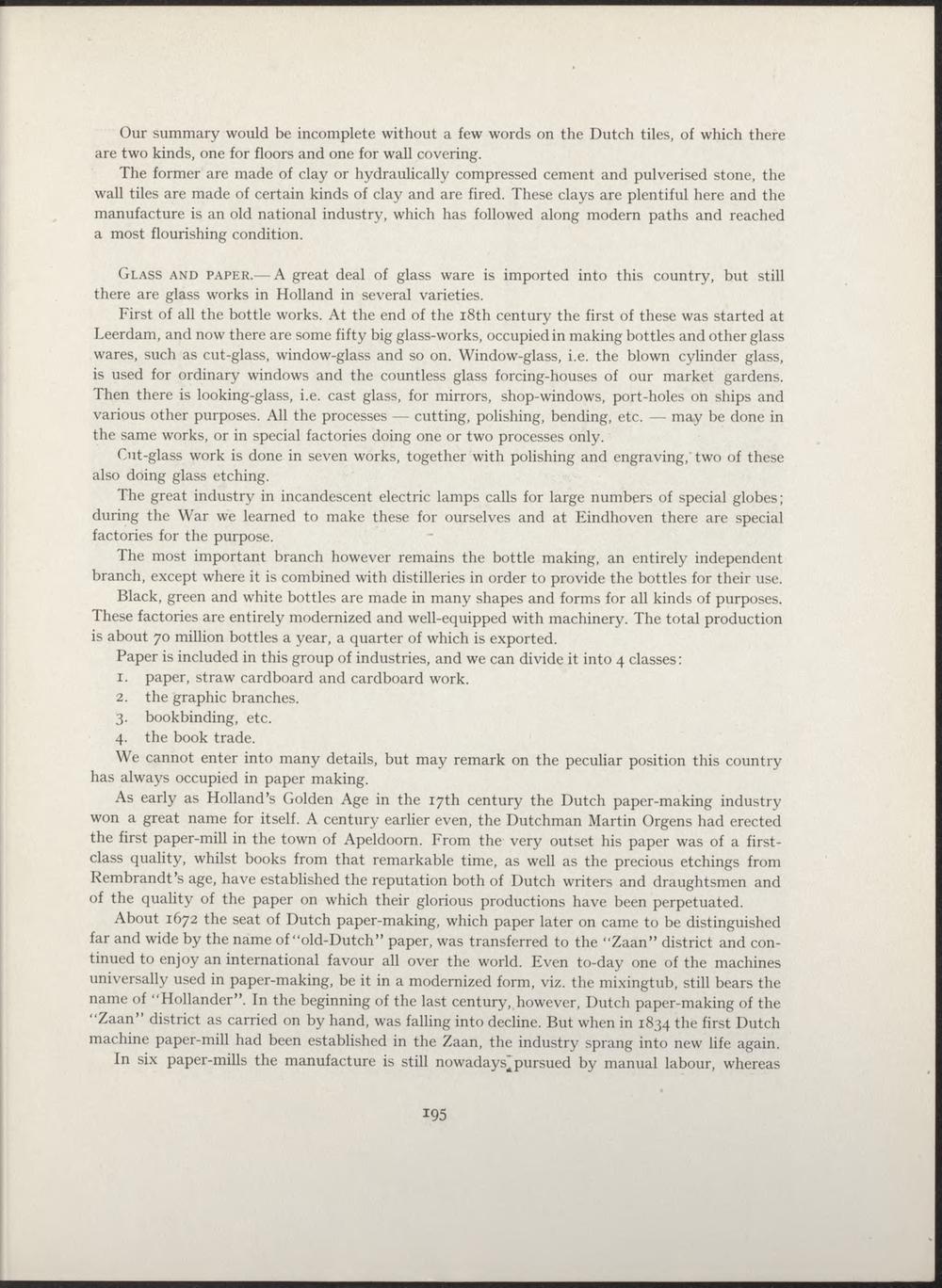 Our summary would be incomplete without a few words on the Dutch tiles, of which there are two kinds, one for floors and one for wall covering.

The former are made of clay or hydraulically compressed cement and pulverised stone, the wall tiles are made of certain kinds of clay and are fired. These clays are plentiful here and the manufacture is an old national industry, which has followed along modern paths and reached a most flourishing condition.

Glass and paper.— A great deal of glass ware is imported into this country, but still there are glass works in Holland in several varieties.

First of all the bottle works. At the end of the i8th century the first of these was started at Leerdam, and now there are some fifty big glass-works, occupiedin making bottles and other glass wares, such as cut-glass, window-glass and so on. Window-glass, i.e. the blown cylinder glass, is used for ordinary windows and the countless glass forcing-houses of our market gardens. Then there is looking-glass, i.e. cast glass, for mirrors, shop-windows, port-holes oh ships and various other purposes. AU the processes — cutting, polishing, bending, etc. —> may be done in the same works, or in special factories doing one or two processes only.

Cut-glass work is done in seven works, together with pohshing and engraving,' two of these also doing glass etching.

The great industry in incandescent electric lamps caUs for large numbers of special globes; during the War we learned to make these for ourselves and at Eindhoven there are special factories for the purpose.

The most important branch however remains the bottle making, an entirely independent branch, except where it is combined with distiUeries in order to provide the bottles for their use.

Black, green and white bottles are made in many shapes and forms for aU kinds of purposes. These factories are entirely modernized and weU-equipped with machinery. The total production is about 70 milhon bottles a year, a quarter of which is exported.

Paper is included in this group of industries, and we can divide it into 4 classes:

We cannot enter into many detaüs, but may remark on the peculiar position this country has always occupied in paper making.

As early as HoUand's Golden Age in the I7th century the Dutch paper-making industry won a great name for itself. A century earher even, the Dutchman Martin Orgens had erected the first paper-mül in the town of Apeldoorn. From the very outset his paper was of a firstclass quality, whilst books from that remarkable time, as weU as the precious etchings from Rembrandt's age, have estabhshed the reputation both of Dutch writers and draughtsmen and of the quality of the paper on which their glorious productions have been perpetuated.

About 1672 the seat of Dutch paper-making, which paper later on came to be distinguished far and wide by the name of "old-Dutch" paper, was transferred to the "Zaan" district and continued to enjoy an international favour all over the world. Even to-day one of the machines universally used in paper-making, be it in a modernized form, viz. the mixingtub, still bears the name of "Hollander". In the beginning of the last century, however, Dutch paper-making of the "Zaan" district as carried on by hand, was faUing into dechne. But when in 1834 the first Dutch machine paper-mül had been estabhshed in the Zaan, the industry sprang into new life again.

In six paper-müls the manufacture is still nowadays'pursued by manual labour, whereas