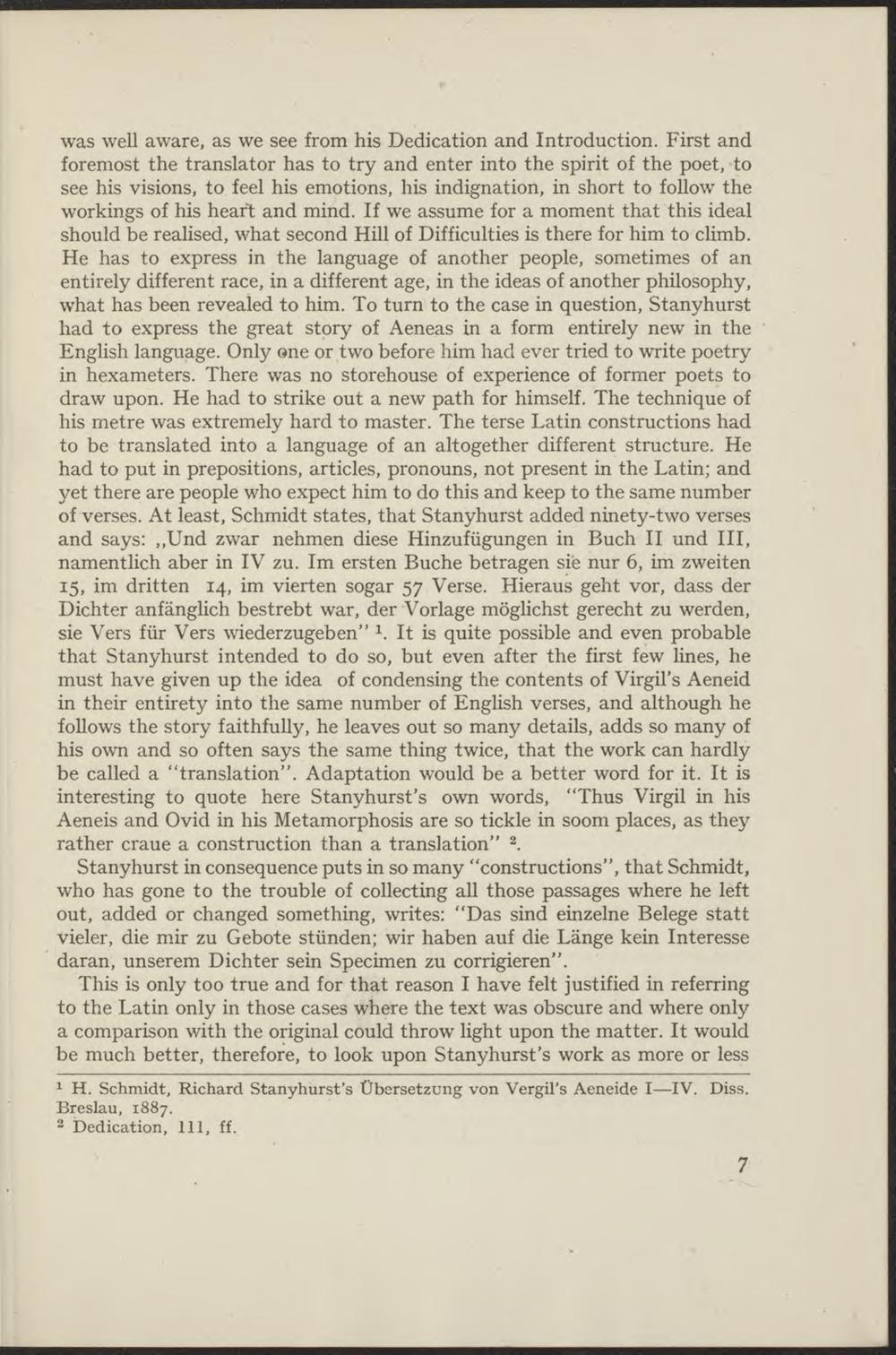 was well aware, as we see from his Dedication and Introduction. First and foremost the translator has to try and enter into the spirit of the poet, to see his visions, to feel his emptions, his indignation, in short to follow the workings of his heaft and mind. If We assume for a moment that this ideal should be realised, what second Hül of Difficulties is there for him to climb. He has to express in the language of another people, sometimes of an entirely different race, in a different age, in the ideas of another philosophy, what has been revealed to him. To turn to the case in question, Stanyhurst had to express the great story of Aeneas in a form entirely new in the English language. Only one or two before him had ever tried to write poetry in hexameters. There was no storehouse of experience of former poets to draw upon. He had to strike out a new path for himself. The technique of his metre was extremely hard to master. The terse Latin constructions had to be translated into a language of an altogether different structure. He had to put in prepositions, articles, pronouns, not present in the Latin; and yet there are people Who expect him to do this and keep to the same number of verses. At least, Schmidt states, that Stanyhurst added ninety-two verses and says: „Und zwar nehmen diese Hinzufügungen in Buch II und III, namentlich aber in IV zu. Im ersten Buche betragen sie nur 6, im zweiten 15, im dritten 14, im vierten sogar 57 Verse. Hieraus geht vor, dass der Dichter anfanglich bestrebt war, der Vorlage möglichst gerecht zu werden, sie Vers für Vers wiederzugeben" *. It is quite possible and even probable that Stanyhurst intended to do so, but even after the first few lines, he must have given up the idea of condensing the contents of Virgil's Aeneid in their entirety into the same number of English verses, and although he follows the story faithfully, he leaves out so many details, adds so many of his own and so often says the same thing twice, that the work can hardly be called a "translation". Adaptation would be a better word for it. It is interesting to quote here Stanyhurst's own words, "Thus Virgil in his Aeneis and Ovid in his Metamorphosis are so tickle in soom places, as they rather craue a construction than a translation" *

Stanyhurst in consequence puts in so many "constructions", that Schmidt, who has gone to the trouble of collecting all those passages where he lèft out, added or changed something, writes: "Das sind einzelne Belege statt vieler, die mir zu Gebote stünden; wir haben auf die Lange kein Interesse daran, unserem Dichter sein Specimen zu corrigieren".

This is only too true and for thftt reason I have feit justified in referring to the Latin only in those cases where the text was obscure and where only a comparison with the original could throw light upon the matter. It would be much better, therefore, to look upon Stanyhurst's work as more or less