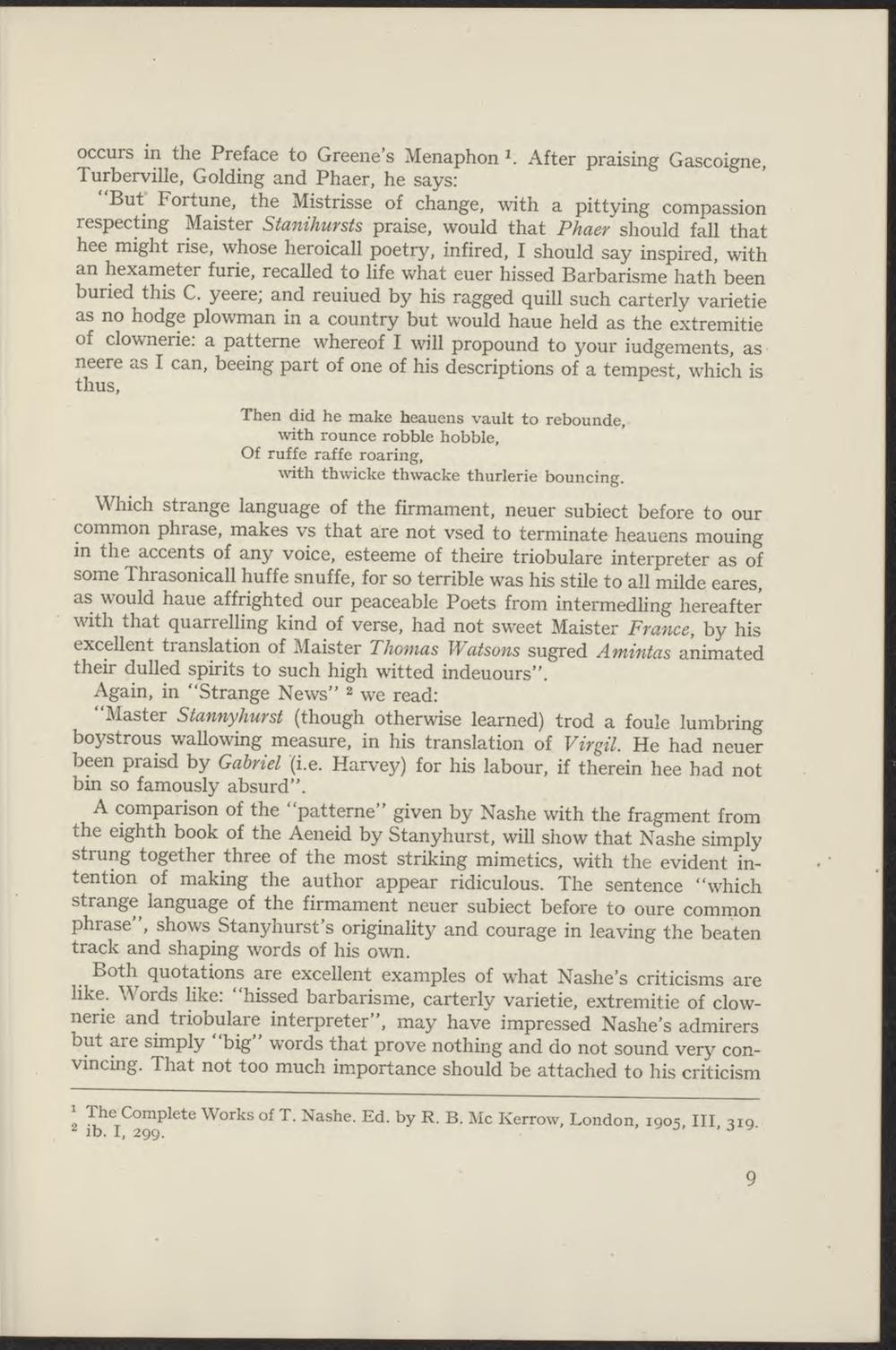 occurs in the Preface to Greene's Menaphon *. After praising Gascoigne, Turbefville, Golding and Phaer, he says:

"But Fortune, the Mistrisse of change, with a pittying compassion respecting Maister Stanihursts praise, would that Phaer should fall that hee might rise, whose heroicall poetry, infired, I should say inspired, with an hexameter furie, recalled to life what euer hissed Barbarisme hath' been buried this C. yeere; and reuiued by his ragged quill such carterly varietie as no hodge plowman in a country but would haue held as the extremitie of clownerie: a patterne whereof I will propound to your iudgements, as' neere as I can, beeing part of one of his descriptions of a tempest, which is thus,

Then did he make heauens vault to rebounde,

Which strange language of the firmament, neuer subiect before to our common phrase, makes vs that are not vsed to terminate heauens mouing m the accents of any voice, esteeme of theire triobulare interpreter as of some Thrasonicall huffe snuffe, for so terrible was his stile to all milde eares, as would haue affrighted our peaceable Poets from intermedling hereafter with that quarrelling kind of verse, had not sweet Maister France, by bis excellent translation of Maister Thomas Watsons sugred Amiwtas animated their dulled spirits to such high witted indeuours".

"Master Stannyhurst (though otherwise learned) trod a foule lumbring boystrous wallowing measure, in his translation of Virgil. He had neuer been praisd by Gabriel (i.e. Harvey) for his labour, if therein hee had not bin so famously absurd".

A comparison of the "patterne" given by Nashe with the fragment from the eighth book of the Aeneid by Stanyhurst, will show that Nashe simply strung together three of the most striking mimetics, with the evident intention of making the author appear ridiculous. The sentence "which strange language of the firmament neuer subiect before to oure common phrase", shows Stanyhurst's originality and courage in leaving the beaten track and shaping words of his own.

Both quotations are excellent examples of what Nashe's criticisms are like. Words hke: "hissed barbarisme, carterly varietie, extremitie of clownerie and triobulare interpreter", may have impressed Nashe's admirers but are simply "big" words that prove nothing and do not sound very convincing. That not too much importance should be attached to his criticism