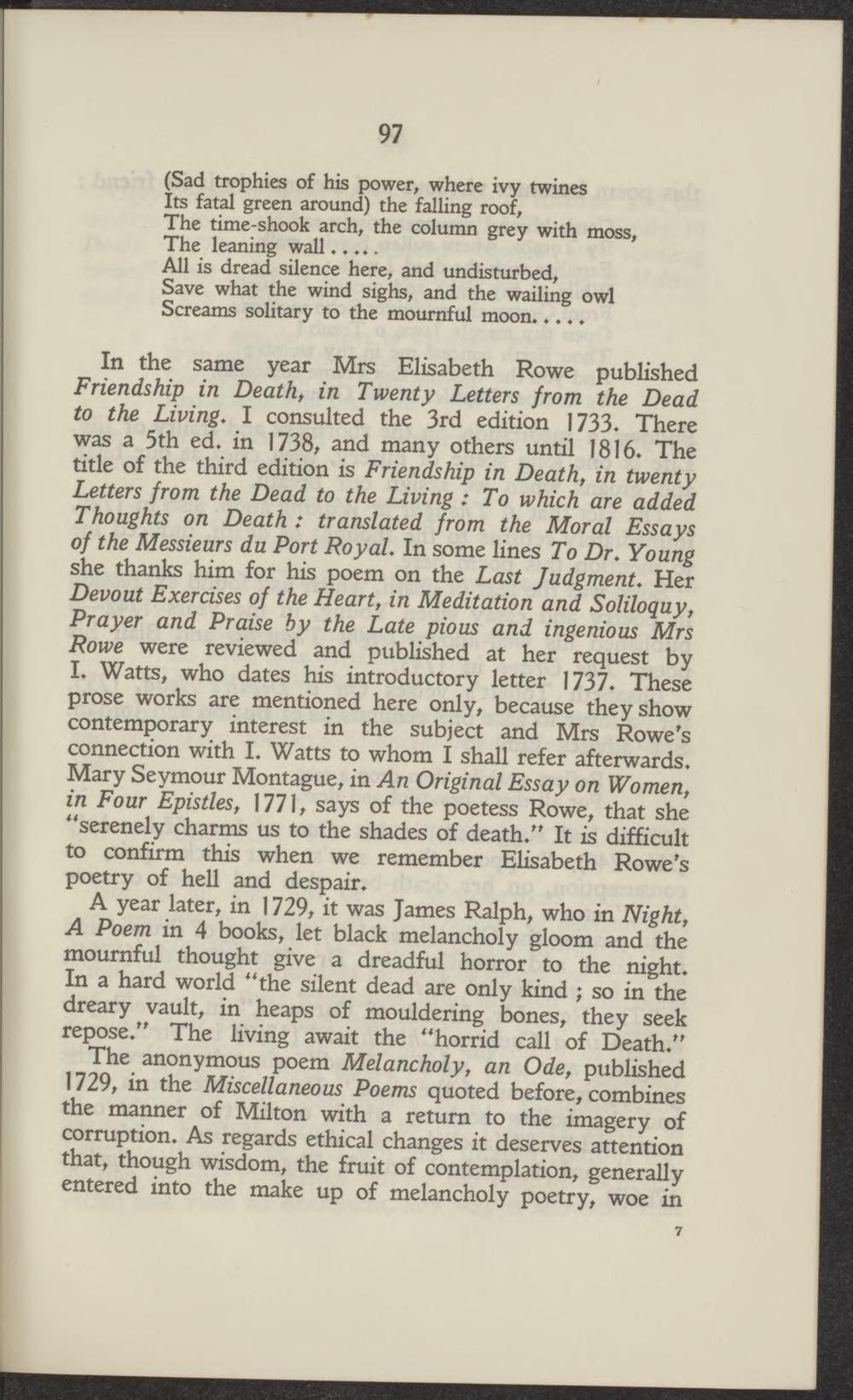 (Sad trophies of his power, where ivy twines

The time-shook arch, the column grey with moss

All is dread silence here, and undisturbed, Save what the wind sighs, and the wailing owl Screams solitary to the mournful moon.....

In the same year Mrs Ehsabeth Rowe published Fnendship in Death, in Twenty Letters from the Dead to the Living. I consulted the 3rd edition 1733. There was a^5th ed. in 1738, and many others until 1816. The trtle of the third edition is Friendship in Death, in twenty Letters from the Dead to the Living : To which are added Thoughts on Death : translated from the Moral Essays of the Messieurs du Port RoyaL In some lines To Dr. Young she thanks him for his poem on the Last Judgment Her Devout Exercises of the Heart, in Meditation and Soliloquy, Prayer and Praise by the Late pious and ingenious Mrs Rowe were reviewed and published at her request by L Watts, who dates his introductory letter 1737. These prose works are mentioned here only, because they show contemporary mterest in the subject and Mrs Rowe's connection with t Watts to whom I shall refer afterwards. Mary Seymour Montague, in An Original Essay on Women, in Four Episües, 1771, says of the poetess Rowe, that she serenely charms us to the shades of death." It is difficult to confirm this when we remember Elisabeth Rowe's poetry of heil and despair.

A year later, in 1729, it was James Ralph, who in Night, A Poem m 4 books, let black melancholy gloom and the mournful thought give a dreadful horror to the night In a hard world "the süent dead are only kind ; so in the dreary vault, in heaps of mouldering bones, they seek repose. The hving await the "horrid call of Death." iT'Sie an?ny^<?US„poem Mel^choly, an Ode, published UZ% m the Miscellaneous Poems quoted before, combines the manner of Müton with a return to the imagery of corrupoon. As regards ethical changes it deserves attention that, though wisdom, the fruit of contemplation, generally entered mto the make up of melancholy poetry; woe in