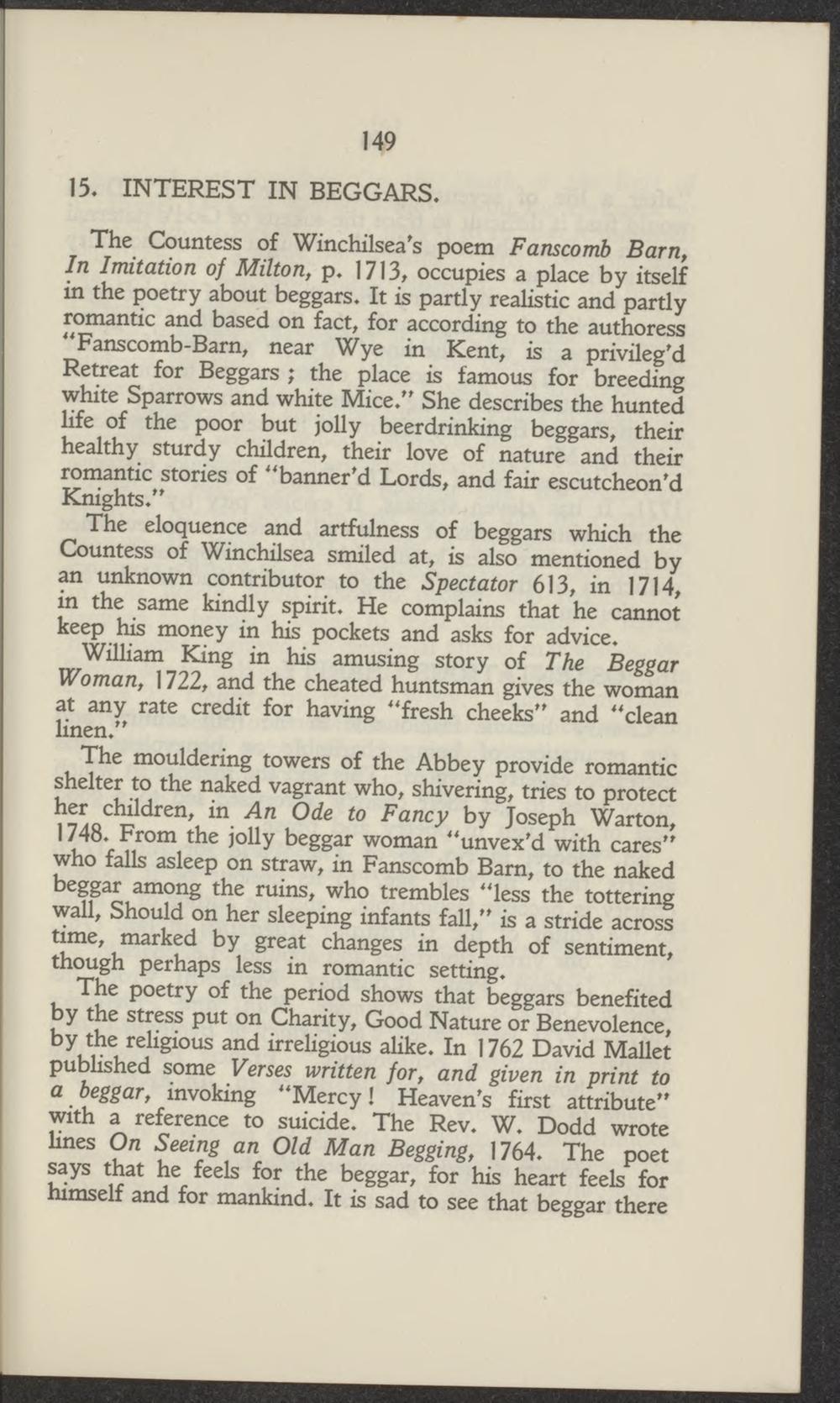 The Countess of Winchüsea's poem Fanscomb Barn, In Imitation of Milton, p. 1713, occupies a place by itself m the poetry about beggars. It is partly reahstic and partly romantic and based on faet, for according to the authoress Fanscomb-Barn, near Wye in Kent, is a privileg'd Retreat for Beggars; the place is famous for breeding white Sparrows and white Mice." She describes the hunted hfe of the poor but jolly beerdrmking beggars, their healthy sturdy children, their love of nature and their romantic stories of "banner'd Lords, and fair escutcheon'd Kmghts."

The eloquence and artfulness of beggars which the Countess of Winchilsea smiled at, is also mentioned by an unknown contributor to the Spectator 613, in 1714, m the same kindly spirit. He complains that he cannot keep nis money in his pockets and asks for advice.

William King in his amusing story of The Beggar Woman, 1722, and the cheated huntsman gives the woman at any rate credit for having "fresh cheeks" and "clean hnen.

The mouldering towers of the Abbey provide romantic shelter to the naked vagrant who, shivering, tries to protect

t?AQ * ' An 0de t0 Fancy fay J°sePh Warton, V r u°m 'oUy be8ëM woman "unvex'd with cares" who falls asleep on straw, in Fanscomb Barn, to the naked beggar among the ruins, who trembles "less the rottering wall, Should on her sleeping infants fall," is a stride across tune, marked by great changes in depth of sentiment, though perhaps less in romantic setting.

The poetry of the period shows that beggars benefited by the stress put on Charity, Good Nature or Benevoience, by ÖK religioiis and irrehgious alike. In 1762 David Mallet published some Verses written for, and given in print to a beggar, involung "Mercyl Heaven's first attribute" with a reference to suicide. The Rev. W. Dodd wrote hnes On Seeing an Old Man Begging, 1764. The poet says that he feels for the beggar, for his heart feels for nimseli and for mankind. It is sad to see that beggar there