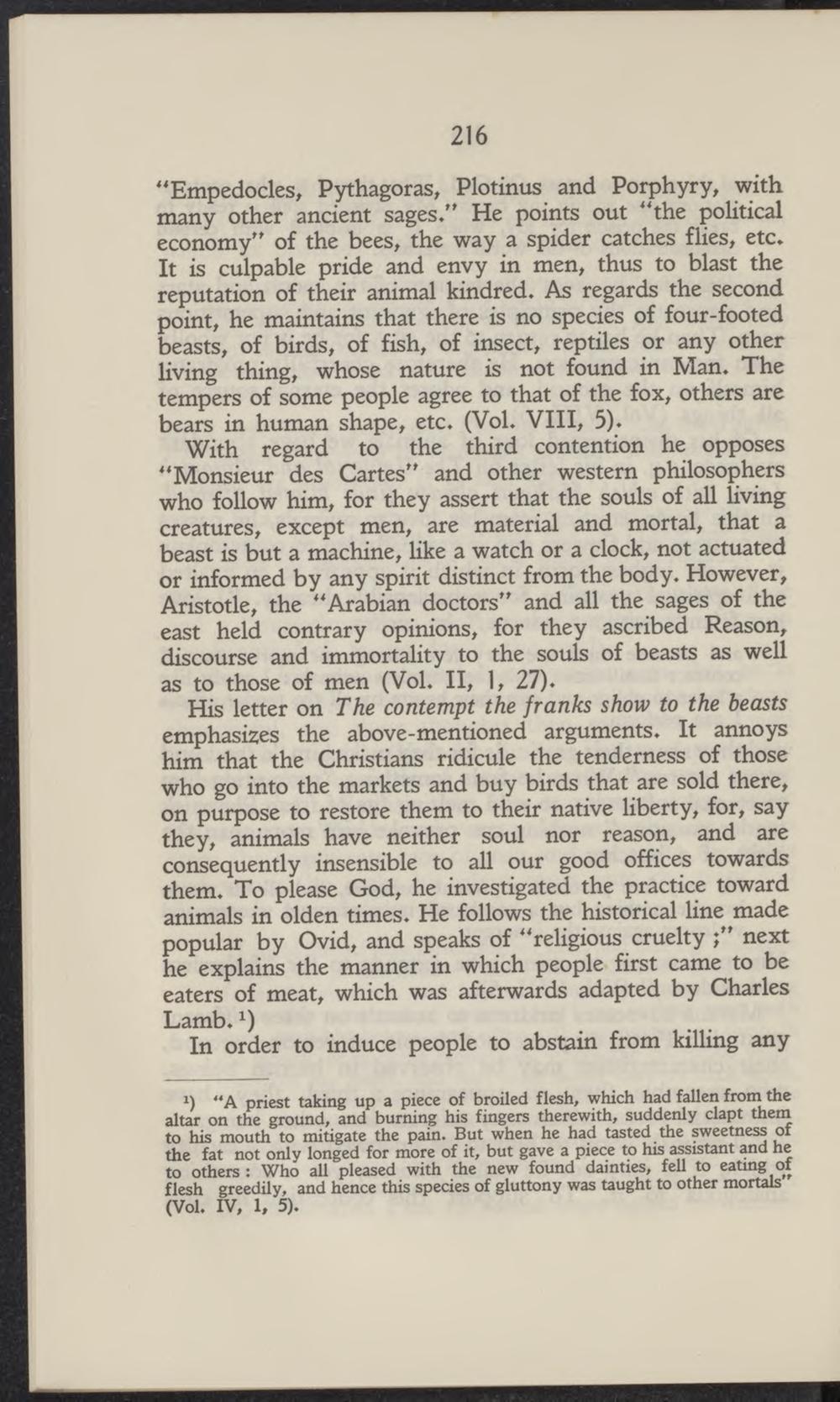 "Empedocles, Pythagoras, Plotinus and Porphyry, with many other ancient sages." He points out "the pohtical economy" of the bees, the way a spider catches flies, etc. It is culpable pride and envy in men, thus to blast the reputation of their animal kindred. As regards the second point, he maintains that there is no species of four-footed beasts, of birds, of fish, of insect, reptiles or any other living thing, whose nature is not found in Man. The tempers of some people agree to that of the fox, others are bears in human shape, etc. (Vol. VIII, 5).

With regard to the third contention he opposes "Monsieur des Cartes" and other western philosophefB who follow him, for they assert that the souls of all living creatures, except men, are material and mortal, that a beast is but a machine, like a watch or a clock, not actuated or informed by any spirit distinct from the body. However, Aristode, the "Arabian doctors" and all the sages of the east held contrary opinions, for they ascribed Reason, discourse and inunortahty to the souls of beasts as well as to those of men (Vol. II, 1, 27).

His letter on The contem.pt the franks show to the beasts emphasizes the above-mentioned arguments. It annoys him that the Christians ridicule the tenderness of those who go into the markets and buy birds that are sold there, on purpose to restore them to their native liberty, for, say they, am'tnak have neither soul nor reason, and are consequently insensible to all our good offices towards them. To please God, he investigated the practicc toward animals in olden tunes. He follows the historical hne made popular by Ovid, and speaks of "rehgious cruelty ;" next he explains the marmer in which people first came to be eaters of meat, which was afterwards adapted by Charles Lamb. *)

In order to induce people to abstain from killing any

x) "A priest taking up a piecc of broiled flesh, which had fallen from the altar on the ground, and burning his fingers therewith, suddenly clapt them to his mouth to mitigate the pain. But when he had tasted the sweetness ot the fat not only longed for more of it, but gave a piece to his assistant and he to others: Who all pleased with the new found dainties, feil to eating ot flesh greedily, and hence this species of gluttony was taught to other mortals (Vol. IV, 1, 5).