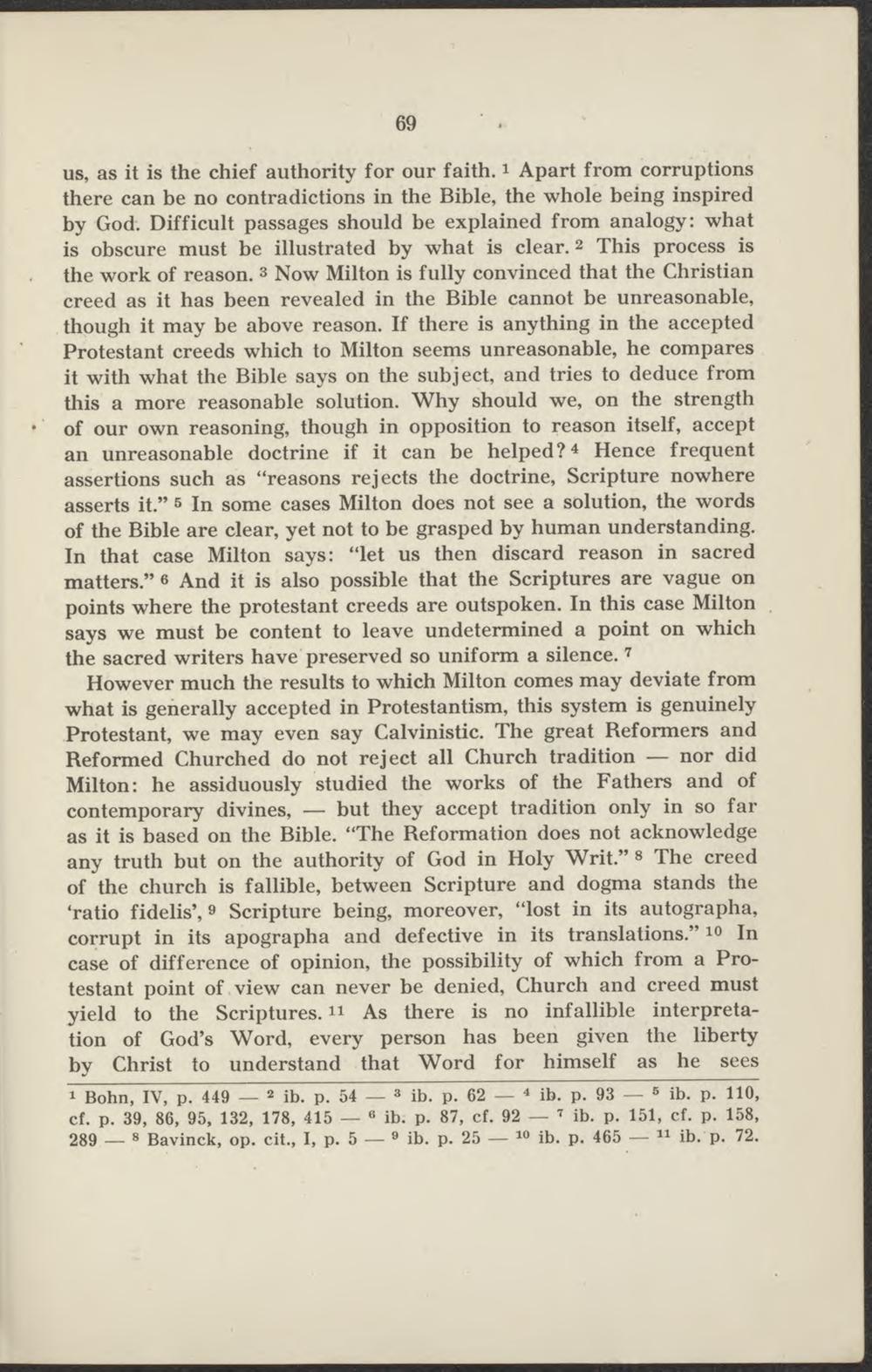 us, as it is the chief authority for our faith. i Apart from corruptions there can be no contradictions in the Bible, the whole being inspired by God. Difficult passages should be explained from analogy: what is obscure must be illustrated by what is clear. 2 This process is the work of reason. 3 Now Milton is f ully convinced that the Christian creed as it has been revealed in the Bible cannot be unreasonable, though it may be above reason. If there is anything in the accepted Protestant creeds which to Milton seems unreasonable, he compares it with what the Bible says on the subject, and tries to deduce from this a more reasonable solution. Why should we, on the strength of our own reasoning, though in opposition to reason itself, accept an unreasonable doctrine if it can be helped?4 Hence frequent assertions such as "reasons rejects the doctrine, Scripture nowhere asserts it." 6 In some cases Milton does not see a solution, the words of the Bible are clear, yet not to be grasped by human understanding. In that case Milton says: "let us then discard reason in sacred matters."6 And it is also possible that the Scriptures are vague on points where the protestant creeds are outspoken. In this case Milton says we must be content to leave undetermined a point on which the sacred writers have preserved so uniform a silence. 7

However much the results to which Milton comes may deviate from what is generally accepted in Protestantism, this system is genuinely Protestant, we may even say Calvinistic. The great Reformers and Reformed Churched do not rej eet all Church tradition — nor did Milton: he assiduously studied the works of the Fathers and of contemporary divines, — but they accept tradition only in so far as it is based on the Bible. "The Reformation does not acknowledge any truth but on the authority of God in Holy Writ." 3 The creed of the church is fallible, between Scripture and dogma stands the 'ratio fidelis', 9 Scripture being, moreover, "lost in its autographa, corrupt in its apographa and defective in its translations."10 In case of difference of opinion, the possibility of which from a Protestant point of view can never be denied, Church and creed must yield to the Scriptures.11 As there is no infallible interpretation of God's Word, every person has been given the liberty by Christ to understand that Word for himself as he sees