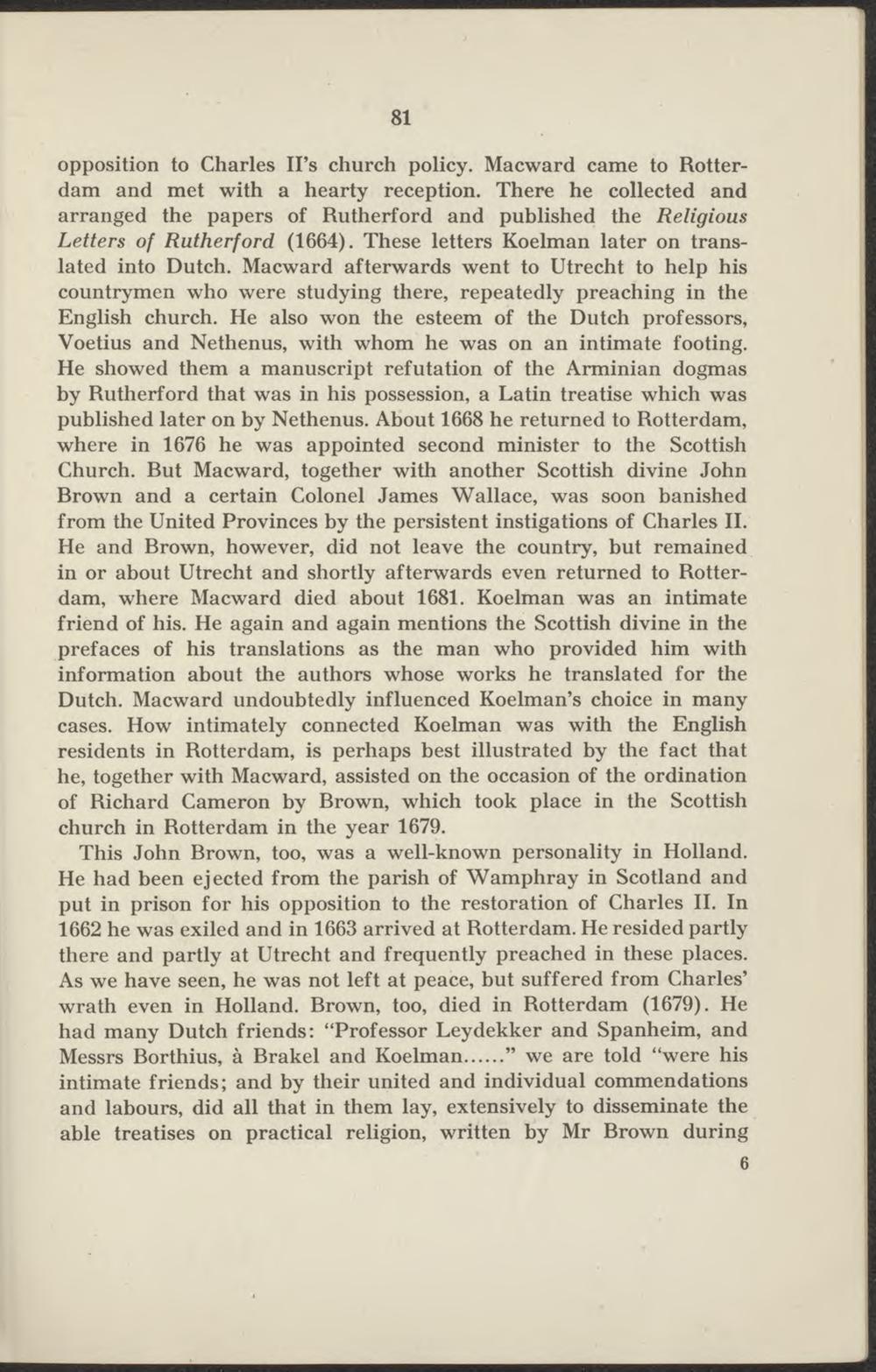 opposition to Charles U's church policy. Macward came to Rotterdam and met with a hearty reception. There he collected and arranged the papers of Rutherford and published the Religious Letters of Rutherford (1664). These letters Koelman later on translated into Dutch. Macward afterwards went to Utrecht to help his countrymen who were studying there, repeatedly preaching in the English church. He also won the esteem of the Dutch professors, Voetius and Nethenus, with whom he was on an intimate footing. He showed them a manuscript refutation of the Arminian dogmas by Rutherford that was in his possession, a Latin treatise which was published later on by Nethenus. About 1668 he returned to Rotterdam, where in 1676 he was appointed second minister to the Scottish Church. But Macward, together with another Scottish divine John Brown and a certain Colonel James Wallace, was soon banished from the United Provinces by the persistent instigations of Charles II. He and Brown, however, did not leave the country, but remained in or about Utrecht and shortly afterwards even returned to Rotterdam, where Macward died about 1681. Koelman was an intimate friend of his. He again and again mentions the Scottish divine in the prefaces of his translations as the man who provided him with information about the authors whose works he translated for the Dutch. Macward undoubtedly influenced Koelman's choice in many cases. How intimately connected Koelman was with the English residents in Rotterdam, is perhaps best üiustrated by the fact that he, together with Macward, assisted on the occasion of the ordination of Richard Cameron by Brown, which took place in the Scottish church in Rotterdam in the year 1679.

This John Brown, too, was a well-known personality in Holland. He had been ejected from the parish of Wamphray in Scotland and put in prison for his opposition to the restoration of Charles II. In 1662 he was exiled and in 1663 arrived at Botterdam. He resided partly there and partly at Utrecht and frequently preached in these places. As we have seen, he was not left at peace, but suffered from Charles' wrath even in Holland. Brown, too, died in Botterdam (1679). He had many Dutch friends: "Professor Leydekker and Spanheim, and

Messrs Borthius, a Brakel and Koelman " we are told "were his

intimate friends; and by their united and individual commendations and labours, did all that in them lay, extensively to disseminate the able treatises on practical religion, written by Mr Brown during