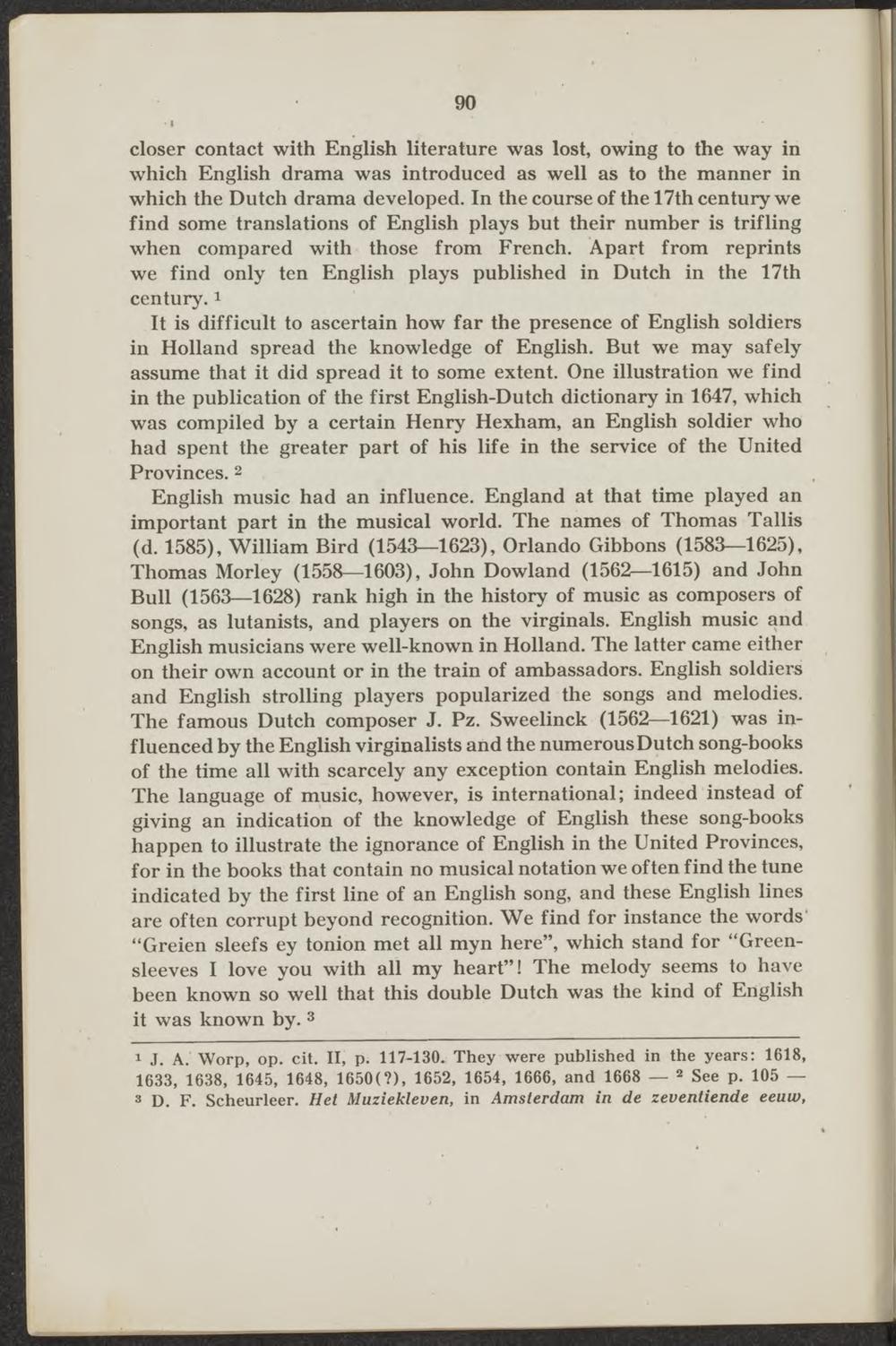 closer contact with English literature was lost, owing to the way in which English drama was introduced as well as to the manner in which the Dutch drama developed. In the course of the 17th century we find some translations of English plays but their number is trifling when compared with those from French. Apart from reprints we find only ten English plays published in Dutch in the 17th century.1

It is difficult to ascertain how far the presence of English soldiers in Holland spread the knowledge of English. But we may safely assume that it did spread it to some extent. One illustration we find in the publication of the first English-Dutch dictionary in 1647, which was compiled by a certain Henry Hexham, an English soldier who had spent the greater part of his life in the service of the United Provinces. 2

English music had an influence. England at that time played an important part in the musical world. The names of Thomas Tallis (d. 1585), William Bird (1543—1623), Orlando Gibbons (1583—1625), Thomas Morley (1558—1603), John Dowland (1562—1615) and John Buil (1563—1628) rank high in the history of music as composers of songs, as lutanists, and players on the virginals. English music and EngUsh musicians were well-known in Holland. The latter came either on their own account or in the train of ambassadors. EngUsh soldiers and EngUsh strolUng players popularized the songs and melodies. The famous Dutch composer J. Pz. Sweelinck (1562—1621) was inf luenced by the EngUsh virginaUsts and the numerousDutch song-books of the time all with scarcely any exception contain EngUsh melodies. The language of music, however, is international; indeed instead of giving an indication of the knowledge of English these song-books happen to Ulustrate the ignorance of EngUsh in the United Provinces, for in the books that contain no musical notation we of ten find the tune indicated by the first line of an EngUsh song, and thesë English Unes are often corrupt beyond recognition. We find for instance the words' "Greien sleefs ey tonion met all myn here", which stand for "Greensleeves I love you with all my heart"! The melody seems to have been known so well that this doublé Dutch was the kind of Eflglish it was known by. 3