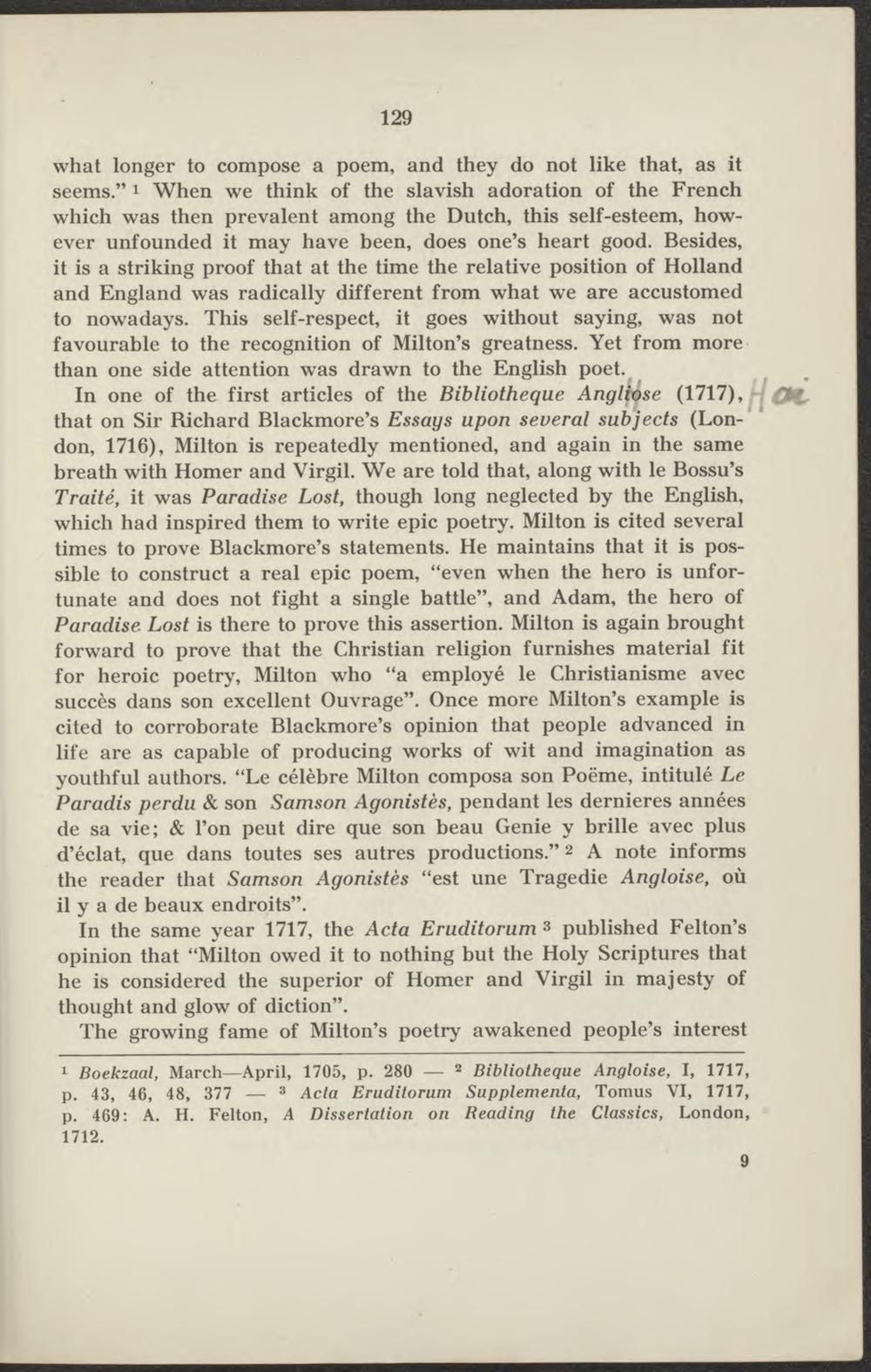 what longer to compose a poem, and they do not like that, as it seems."1 When we think of the slavish adoration of the French which was then prevalent among the Dutch, this self-esteem, however unfounded it may have been, does one's heart good. Besides, it is a striking proof that at the time the relative position of Holland and England was radically different from what we are accustomed to nowadays. This self-respect, it goes without saying, was not favourable to the recognition of Milton's greatness. Yet from more than one side attention was drawn to the English poet.

In one of the first articles of the Bibliothèque Angltyse (1717), i that on Sir Richard Blackmore's Essays upon several subjects (London, 1716), Milton is repeatedly mentioned, and again in the same breath with Homer and Virgil. We are told that, along with le Bossu's Traité, it was Paradise Lost, though long neglected by the English, which had inspired them to write epic poetry. Milton is cited several times to prove Blackmore's statements. He maintains that it is possible to construct a real epic poem, "even when the hero is unfortunate and does not fight a single battle", and Adam, the hero of Paradise Lost is there to prove this assertion. Milton is again brought forward to prove that the Christian religion furnishes material fit for heroic poetry, Milton who "a employé le Christianisme avec succès dans son excellent Ouvrage". Once more Milton's example is cited to corroborate Blackmore's opinion that people advanced in life are as capable of producing works of wit and imagination as youthful authors. "Le célèbre Milton composa son Poëme, intitulé Le Paradis perdu & son Samson Agonistès, pendant les dernieres années de sa vie; & 1'on peut dire que son beau Genie y brille avec plus d'éclat, que dans toutes ses autres productions."2 A note informs the reader that Samson Agonistès "est une Tragedie Angloise, oü il y a de beaux endroits".

In the same year 1717, the Acta Eruditorum3 published Felton's opinion that "Milton owed it to nothing but the Holy Scriptures that he is considered the superior of Homer and Virgil in majesty of thought and glow of diction".