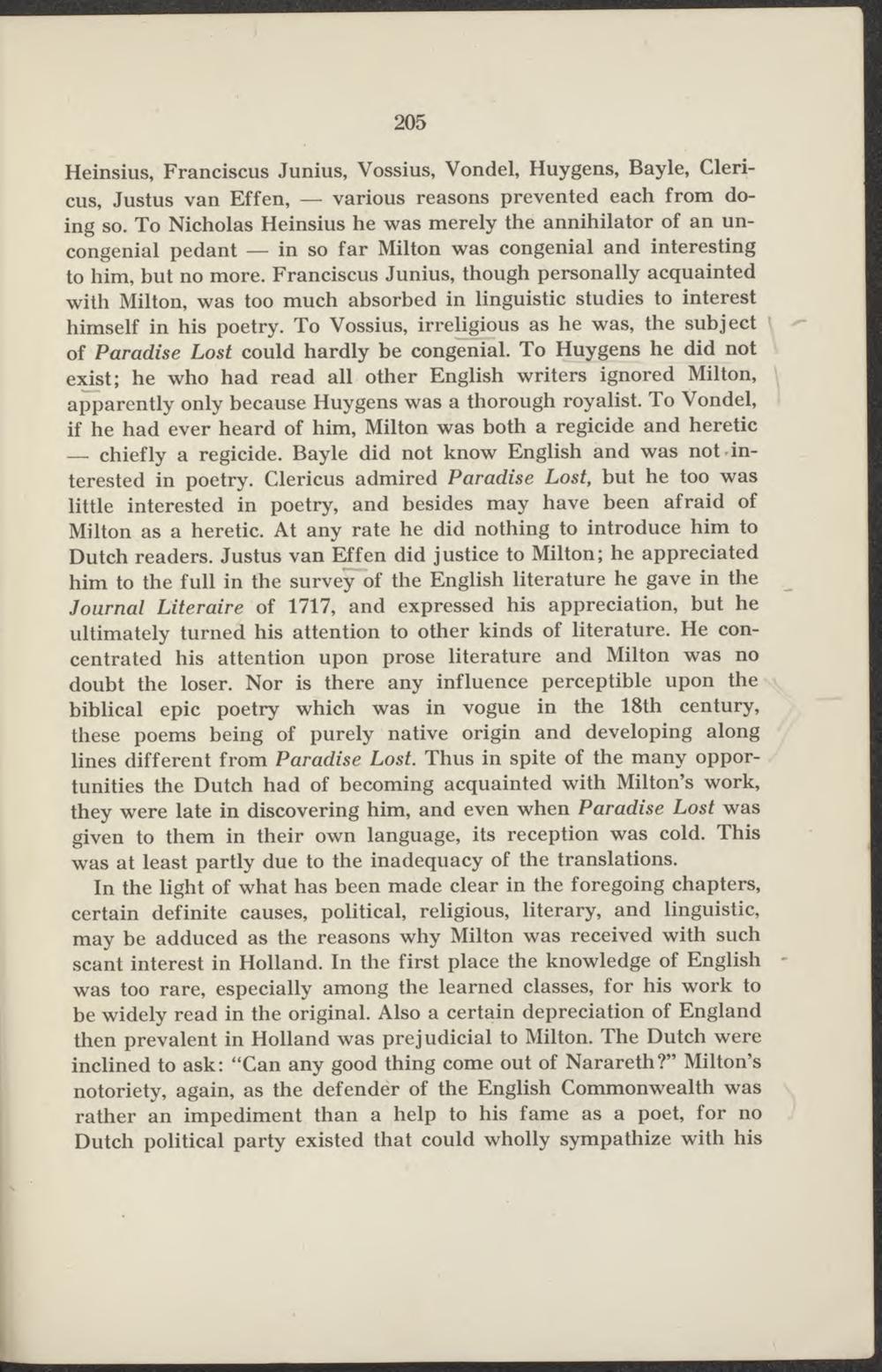 Heinsius, Franciscus Junius, Vossius, Vondel, Huygens, Bayle, Clericus, Justus van Effen, — various reasons prevented each from doing so. To Nicholas Heinsius he was merely thé annihilator of an uncongenial pedant — in so far Milton was congenial and interesting to him, but no more. Franciscus Junius, though personally acquainted with Milton, was too much absorbed in linguistic studies to interest himself in his poetry. To Vossius, irreligious as he was, the subject of Paradise Lost could hardly be congenial. To Huygens he did not exist; he who had read all other English writers ignored Milton, apparently only because Huygens was a thorough royalist. To Vondel, if he had ever heard of him, Milton was both a regicide and heretic — chiefly a regicide. Bayle did not know English and was not.interested in poetry. Clericus admired Paradise Lost, but he too was little interested in poetry, and besides may have been afraid of Milton as a heretic. At any rate he did nothing to introducé him to Dutch readers. Justus van Effen did justice to Milton; he appreciated him to the full in the surveyof the English literature he gave in the Journal Literaire of 1717, and expressed his appreciation, but he ultimately turned his attention to other kinds of literature. He concentrated his attention upon prose literature and Milton was no doubt the loser. Nor is there any influence perceptible upon the biblical epic poetry which was in vogue in the 18th century, these poems being of purely native origin and developing along lines different from Paradise Lost. Thus in spite of the many opportunities the Dutch had of becoming acquainted with Milton's work, they were late in discovering hun, and even when Paradise Lost was given to them in their own language, its reception was cold. This was at least partly due to the inadequacy of the translations.

In the light of what has been made clear in the foregoing chapters, certain definite causes, political, religious, literary, and linguistic, may be adduced as the reasons why Milton was received with such scant interest in Holland. In the first place the knowledge of English was too rare, especially among the learned classes, for his work to be widely read in the original. Also a certain depreciation of England then prevalent in Holland was prejudicial to Milton. The Dutch were inclined to ask: "Can any good thing come out of Narareth?" Milton's notoriety, again, as the defendér of the English Commonwealth was rather an impediment than a help to his fame as a poet, for no Dutch political party existed that could wholly sympathize with his