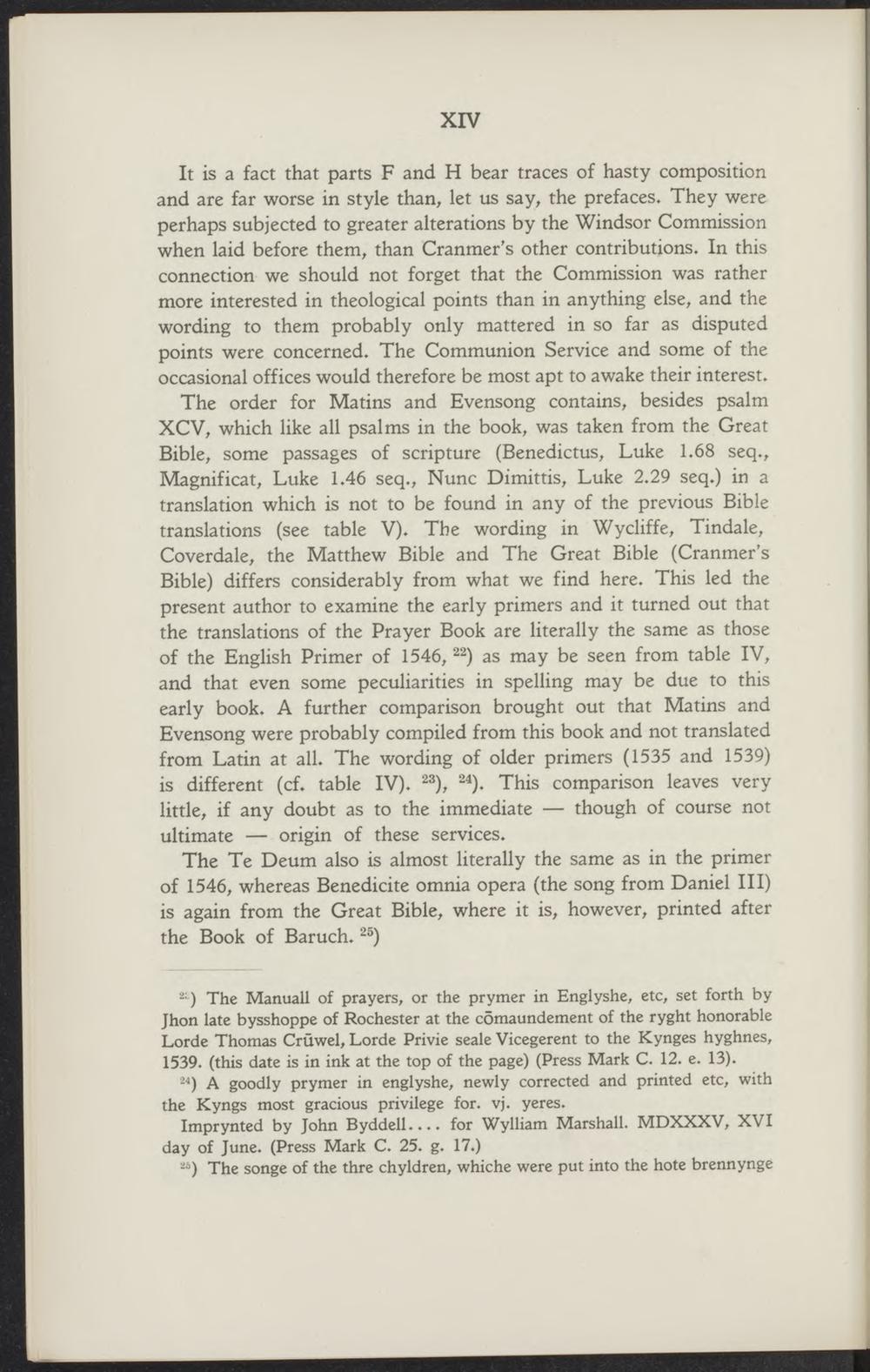 It is a fact that parts F and H bear traces of hasty composition and are far worse in style than, let us say, the prefaces. They were perhaps subjected to greater alterations by the Windsor Commission when laid before them, than Cranmer's other contributions. In this connection we should not forget that the Commission was rather more interested in theological points than in anything else, and the wording to them probably only mattered in so far as disputed points were concerned. The Communion Service and some of the occasional offices would therefore be most apt to awake their interest.

The order for Matins and Evensong contains, besides psalm XCV, which like all psalms in the book, was taken from the Great Bible, some passages of scripture (Benedictus, Luke 1.68 seq., Magnificat, Luke 1.46 seq., Nunc Dimittis, Luke 2.29 seq.) in a translation which is not to be found in any of the previous Bible translations (see table V). The wording in Wycliffe, Tindale, Coverdale, the Matthew Bible and The Great Bible (Cranmer's Bible) differs considerably from what we find here. This led the present author to examine the early primers and it turned out that the translations of the Prayer Book are literally the same as those of the English Primer of 1546, 22) as may be seen from table IV, and that even some peculiarities in spelling may be due to this early book. A further comparison brought out that Matins and Evensong were probably compiled from this book and not translated from Latin at all. The wording of older primers (1535 and 1539) is different (cf. table IV). **), 24). This comparison leaves very little, if any doubt as to the immediate — though of course not ultimate — origin of these services.

The Te Deum also is almost literally the same as in the primer of 1546, whereas Benedicite omnia opera (the song from Daniël III) is again from the Great Bible, where it is, however, printed after the Book of Baruch.25)

•*) The Manuall of prayers, or the prymer in Englyshe, etc, set forth by Jhon late bysshoppe of Rochester at the cömaundement of the ryght honorable Lorde Thomas Crüwel, Lorde Privie seale Vicegerent to the Kynges hyghnes, 1539. (this date is in ink at the top of the page) (Press Mark C. 12. e. 13).

24) A goodly prymer in englyshe, newly corrected and printed etc, with the Kyngs most gracious privilege for. vj. yeres.

") The songe of the tbre chyldren, whiche were put into the hote brennynge