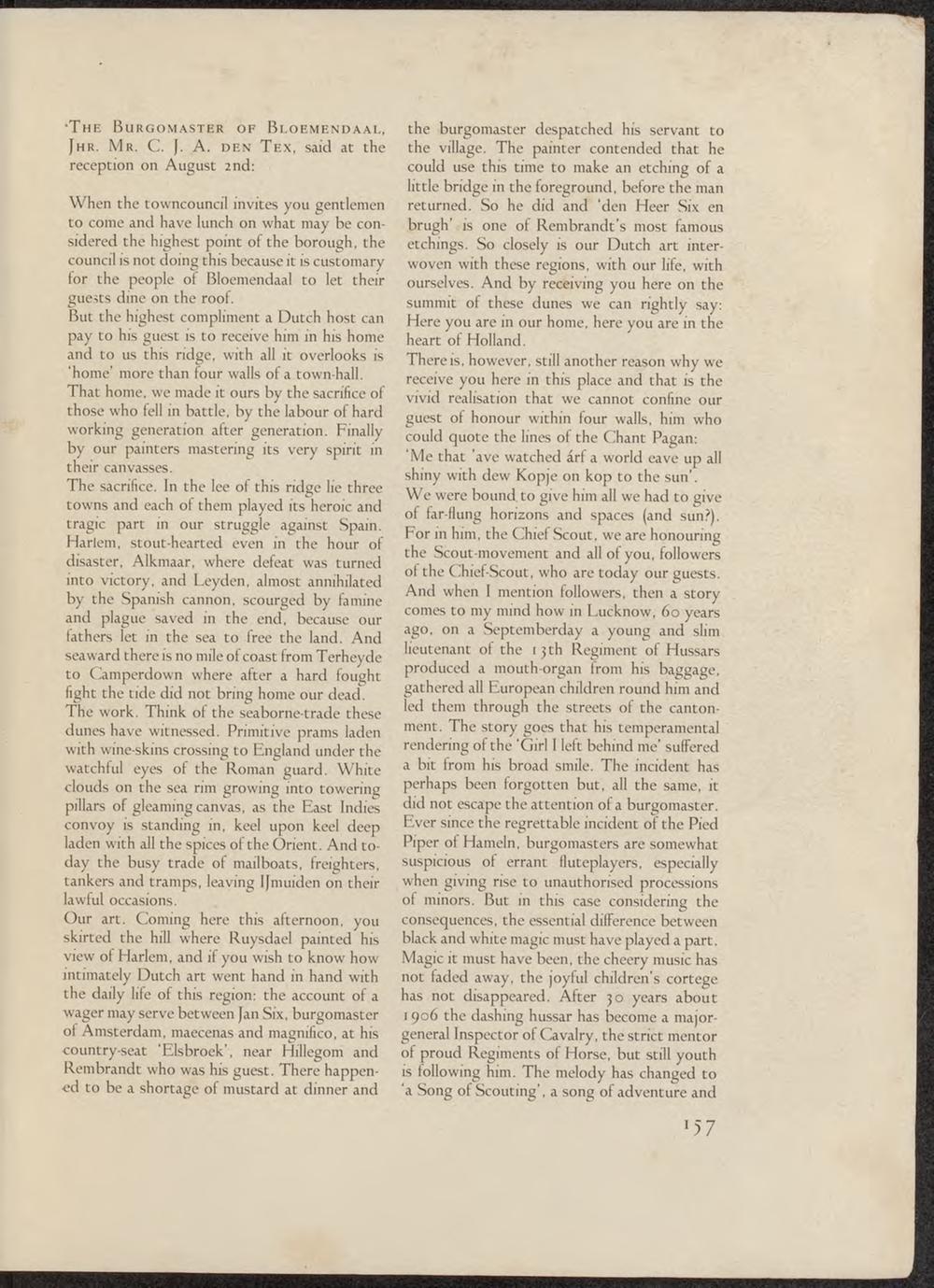 ‘The Burgomaster of Bloemendaal, Jhr. Mr. C. f. A. den Tex, said at the reception on August 2nd:

When the towncouncil invites you gentlemen to come and have lunch on what may be considered the highest point of the borough, the council is not doing this because it is customary for the people of Bloemendaal to let their guests dine on the roof.

But the highest compliment a Dutch host can pay to his guest is to receive him in his home and to us this ridge, with all it overlooks is ‘home’ more than four walls of a town-hall. That home, we made it ours by the sacrifice of those who feil in battle, by the labour of hard working generation after generation. Finally by our painters mastering its very spirit in their canvasses.

The sacrifice. In the lee of this ridge lie three towns and each of them played its heroic and tragic part in our struggle against Spain. Harlem, stout-hearted even in the hour of disaster, Alkmaar, where defeat was turned into victory, and Leyden, almost annihilated by the Spanish cannon, scourged by fa mine and plague saved in the end, because our fathers let in the sea to free the land. And seaward there is no mile of coast ff om Terheyde to Camperdown where after a hard fought fight the tide did not bring home our dead. The work. Think of the seaborne-trade these dunes have witnessed. Primitive prams laden with wine-skins Crossing to England under the watchful eyes of the Roman guard. White clouds on the sea rim growing into towering pillars of gleaming canvas, as the East Indies convoy is standing in, keel upon keel deep laden with all the spices of the Oriënt. And today the busy trade of mailboats, freighters, tankers and tramps, leaving IJmuiden on their lawful occasions.

Our art. Coming here this afternoon, you skirted the hill where Ruysdael painted his view of Harlem, and if you wish to know how intimately Dutch art went hand in hand with the daily life of this region: the account of a wager may serve between Jan Six, burgomaster of Amsterdam, maecenas and magnifico, at his country-seat ‘Elsbroek’, near Hillegom and Rembrandt who was his guest. There happened to be a shortage of mustard at dinner and

the burgomaster despatched his servant to the village. The painter contended that he could use this time to make an etching of a little bridge in the foreground, before the man returned. So he did and ‘den Heer Six en brugh' is one of Rembrandt’s most famous etchings. So closely is our Dutch art interwoven with these regions, with our life, with ourselves. And by teceiving you here on the summit of these dunes we can rightly say: Here you are in our home, here you are in the heart of Holland.

There is, however, still another reason why we receive you here in this place and that is the vivid realisation that we cannot confine our guest of honour within four walls, him who could quote the lines of the Chant Pagan:

‘Me that ’ave watched arf a world eave up all shiny with dew Kopje on kop to the sun’.

We were bound.to give him all we had to give of far-flung horizons and spaces (and sun?). For in him, the Chief Scout, we are honouring the Scout-movement and all of you, followers of the Chief-Scout, who are today our guests. And when I mention followers, then a story comes to my mind how in Lucknow, 60 years ago, on a Septemberday a young and slim lieutenant of the i 3 th Regiment of Hussars produced a möuth-organ from his baggage, gathered all European children round him and led them through the streets of the cantonment. The story goes that his temperamental rendering of the ‘Girl I left behind me’ suffered a bit from his broad smile. The incident has perhaps been forgotten but, all the same, it did not escape the attention of a burgomaster. Ever since the regrettable incident of the Pied Piper of Hameln, burgomasters are somewhat suspicious of errant fluteplayers, especially when giving rise to unauthorised processions of minors. But in this case considering the consequences, the essential difference between black and white magie must have played a part. Magie it must have been, the cheery music has not faded away, the joyful children’s cortege has not disappeared. After 30 years about 1906 the dashing hussar has become a majorgeneral Inspector of Cavalry, the strict mentor of proud Regiments of Horse, but still youth is following him. The melody has changed to ‘a Song of Scouting', a song of adventure and