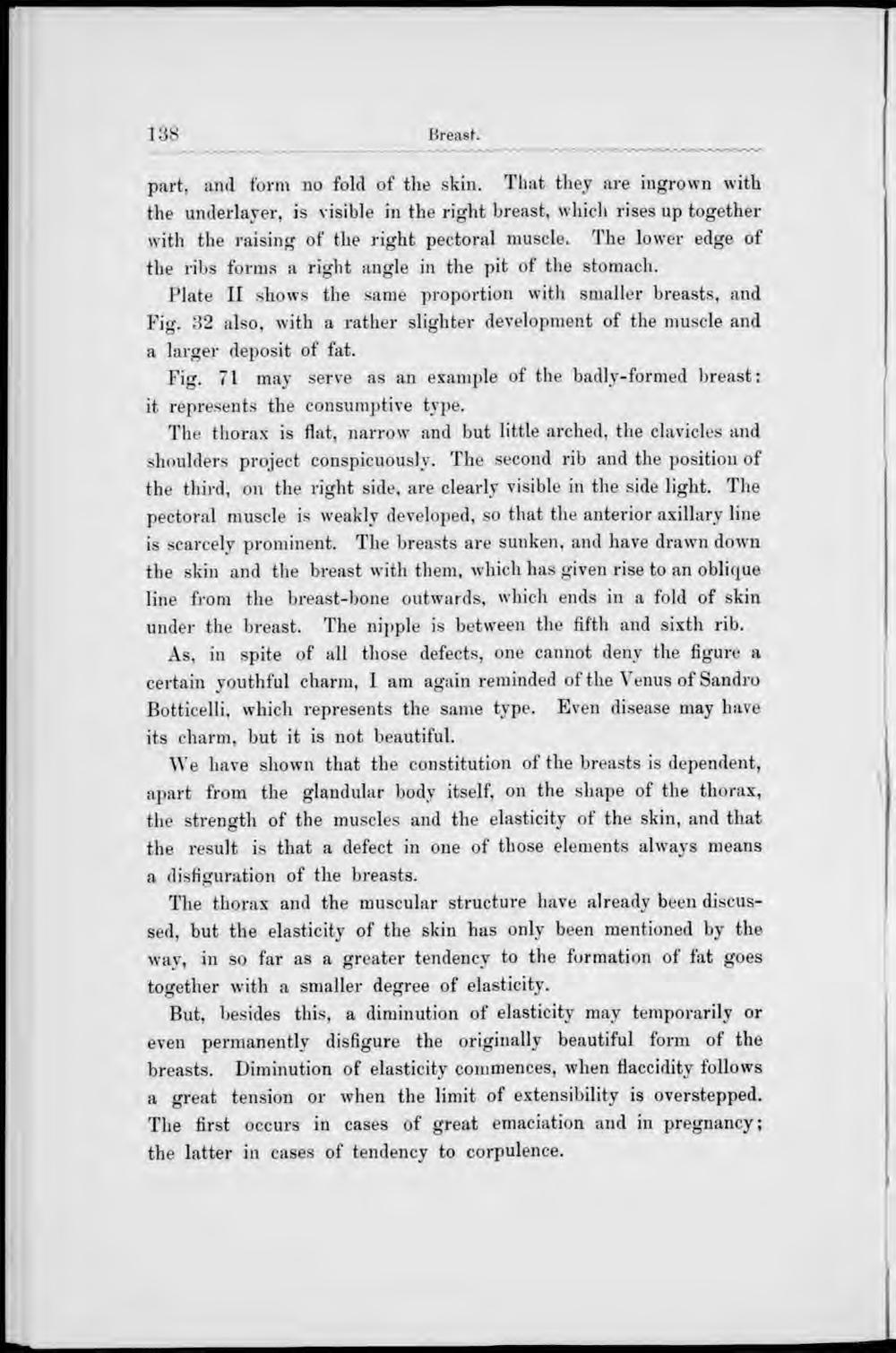 part, and form no fold of the skin. That they are ingrown with the underlayer, is visible in the right breast, which rises up together with the raising of the right pectoral muscle. The lower edge of the ribs forms a right angle in the pit of the stomach.

Plate II shows the same proportion with smaller breasts, and Fig. 32 also, with a rather slighter development of the muscle and a larger deposit of fat.

Fig. 71 may serve as an example of the badly-formed breast: it represents the consumptive type.

The thorax is flat, narrow and but little arched, the clavicles and shoulders project conspicuouslv. The second rib and tlie position of the third, on the right side, are clearly visible in the side liglit. The pectoral muscle is weakly developed, so that the anterior axillary line is scarcely prominent. The breasts are sunken, and have drawn down the skin and the breast with them, which has given rise to an oblique line from the breast-bone outwards, which ends in a fold of skin under the breast. The nipple is betvveen the fif'th and sixth rib.

As, in spite of all those defects, one cannot deny the figure a certain youthful charm, I am again reminded of the Venus of Sandro Botticelli, which represents the same type. Even disease may have its charm, but it is not beautiful.

We have shown that the constitution of the breasts is dependent, apart from the glandular body itself, on the shape of the thorax, the strengtli of the muscles and the elasticity of the skin, and that the result is that a defect in one of those elements always means a disfiguration of the breasts.

The thorax and the muscular structure have already been discussed, but the elasticity of the skin has only been mentioned by the way, in so far as a greater tendency to the formation of fat goes together with a smaller degree of elasticity.

But, besides this, a diminution of elasticity may temporarily or even permanently disfigure the originally beautiful form of the breasts. Diminution of elasticity commences, when flaccidity follows a great tension or when the limit of extensibility is overstepped. The first occurs in cases of great emaciation and in pregnancy; the latter in cases of tendency to corpulence.