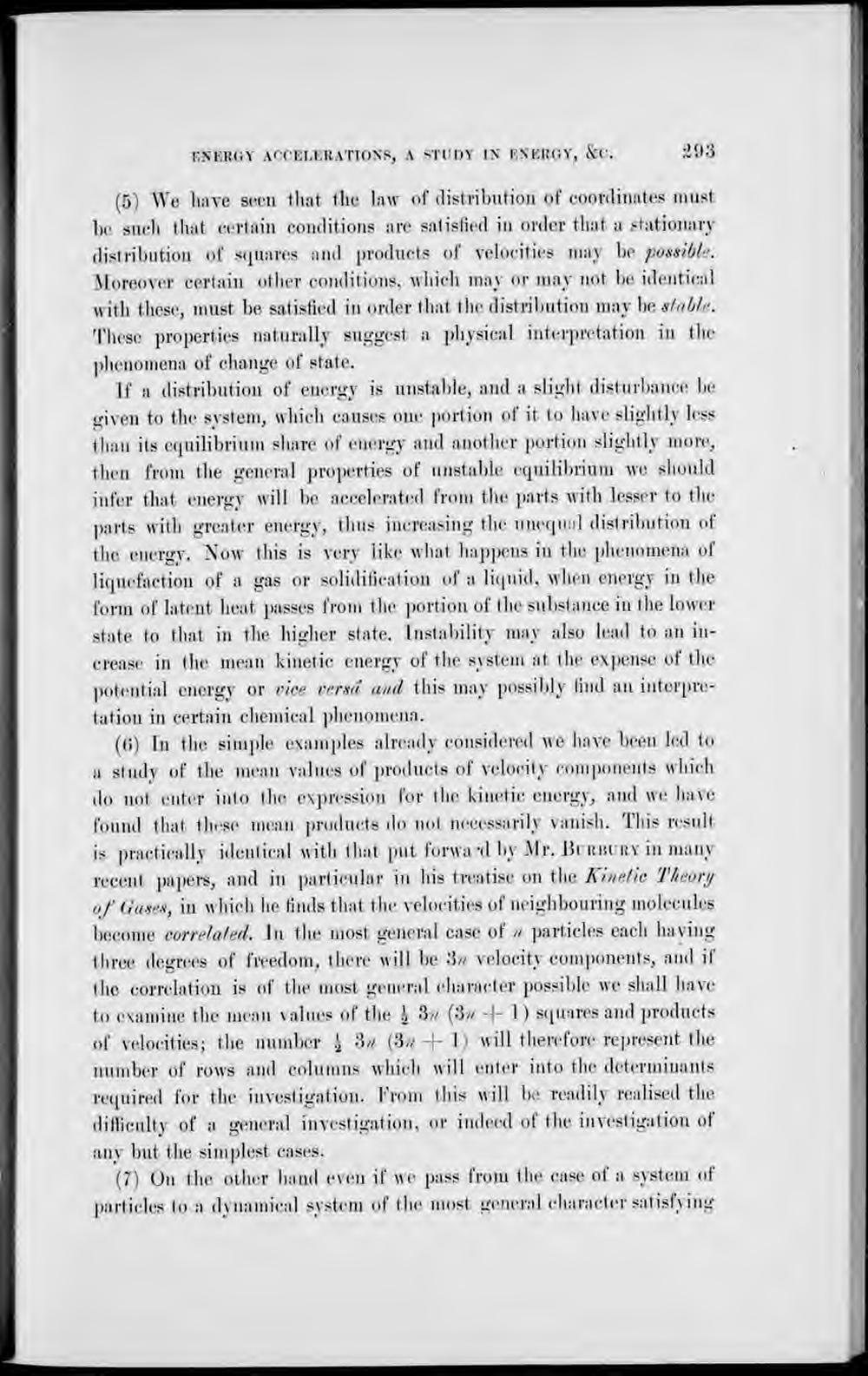 (5) We have seen tliat the law of distribution of coordinates must be sucli tliat certain conilitions are satisfied in order tliat a stationary distribution of squares and products of velocities inay be possible. Moreover certain otlier conditions, wliich may or may not, be identical with these, must be satisfied in order tliat the distribution may be sfable. These properties naturally suggest a pliysical interpretation in the phenomena of change of state.

lf a distribution of energy is unstable, and a slight disturbance be given to the system, wliich causes one ])ortion of it to have slightly less tlian its equilibriuin share of energy and another portion slightly more, then from the general properties of unstable equilibrium we should iufer tliat energy will be accelerated from the parts with lesser to the parts with greater energy, thus increasing the unequal distribution of the energy. Now tliis is very like wliat happens in the phenomena of liquefactiou of a gas or solidification of a liquid, when energy in the form of latent heat passes from the portion of the substance in the lower state to tliat in the higlier state. Instability may also lead to an iuerease in the mean kinetic energy of the system at the expense of the potential energy or vice versa and tliis may possibly fiud an interpretation in certain chemical phenomena.

(ti) In the simple examples already considered we have been led to a study of the mean values of products of velocity components wliich do not enter into the expression for the kinetic energy, and we have found tliat. tlnise niean products do not necessarilv vanish. Tliis result is practically identical with tliat put forwa'd by Mr. Biruury in many recent papers, and in particular in his treatise 011 the Kinetic Theory of (ia-ies, in wliich lie finds tliat the velocities of neighbouring molecules become correlated. In the most general case of u particles each ha ving tliree degrees of freedom, tliere will be Sn velocity components, and if tlie correlation is of the most general character possible we sliall have to examine the mean values of the | 3n (3// -}- 1) squares and products of velocities; the number 4 3// (3// + 1) will theivfore rejircsent the number of rows and columns wliich will enter into the determinants required for the investigation. Froin tliis will be readily realised the difficulty of a general investigation, or indeed ot the investigation of any but the siniplest cases.