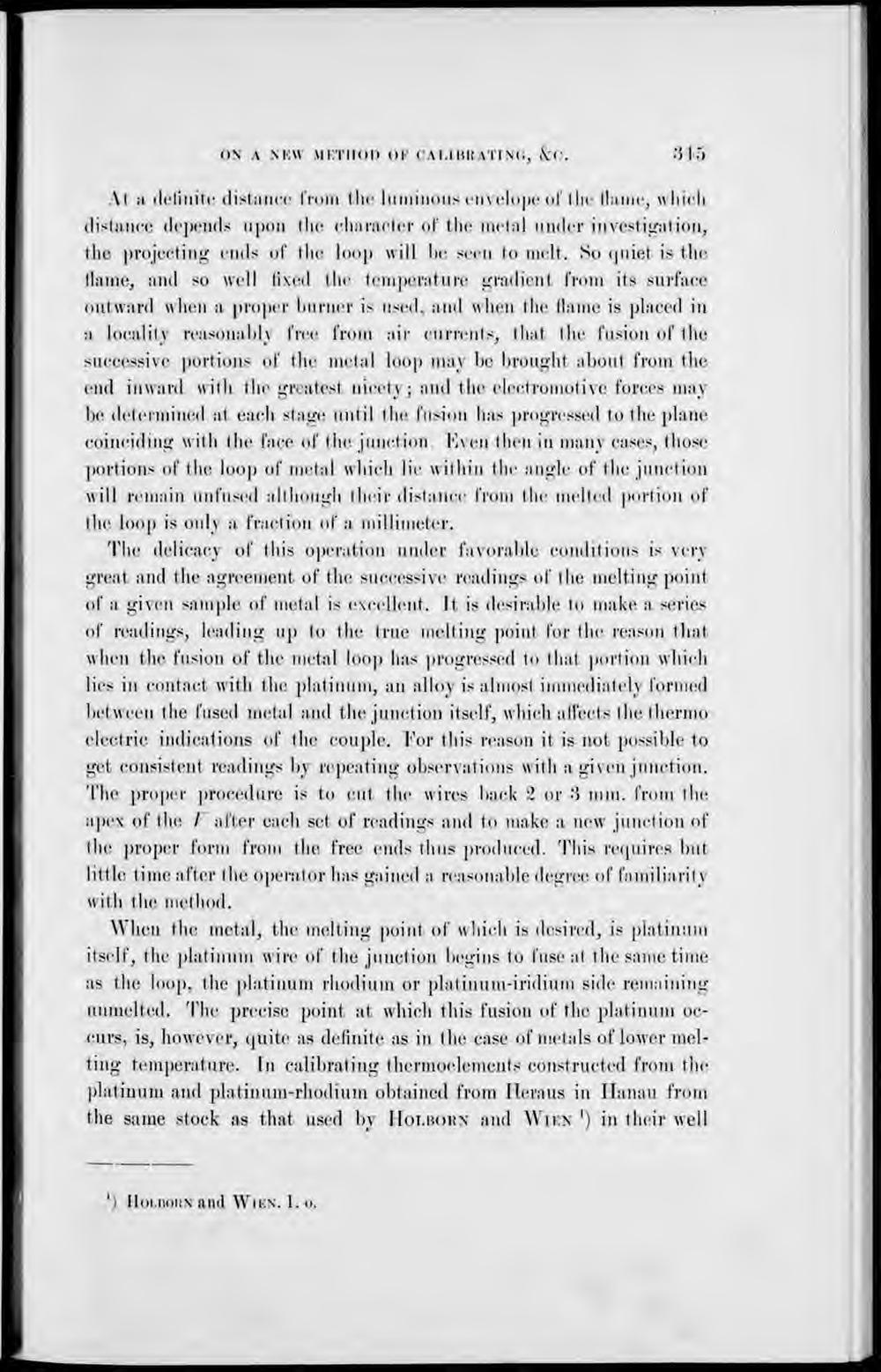 At a detinite distance froni the luminous envelope of the flame, which distance depends upon the character of the inctal under investigation, the projecting ends of the loop \vi 11 he seen to inelt. So quiet is the flame, and so well flxed the temperature gradiënt from its surface ontward whcn a proper bunier is used, and «hen the flame is placed in a localitv reasonably free from air currents, that the fusion of the suecessive portions of the metal loop may be brought about from the end inward with the greatest nicety; and the electromotive forces may be deterniiued at each stage until the fusion lias progressed to the plane coinciding with the face of the junction Even tlien in niany cases, those j)ortions of the loop of metal which lie witliin the angle of the junction will reinain unfused although 1 heir distance from the nielted portion of the loop is only a fraction ol' a millimeter.

The delicacy of tliis operation under favorable conditions is very great and the agreement of the suecessive readings of the melting point of a given sample of metal is excellent. It is desirable to make a series of readings, leading up to the true melting point for the reason that when the fusion of the metal loop lias progressed to that portion which lies in contact with the platinum, an alloy is almost innnediately fornied between the fused metal and the junction itself, which affects the tliermo electric indications of the eouple. For tliis reason it is not possible to get consistent readings by repeating observations with a given junction. The proper procedure is to eut the wires back 2 or •'! mm. from the apex of the / after each set of readings and to make a new junction of the proper form from the free ends tlius produeed. Tliis recpiires hut little time after the operator lias gained a reasonable degree of familiarity with the niethod.

Wlien the metal, the melting point of which is desired, is platinum itself, the platinum wire of the junction begins to fuse at the same time as the loop, the platinum rhodium or platinuin-iridium side reniaining unmelted. The precise point at which tliis fusion of the platinum occurs, is, however, quite as definite as in the case of metais of lower melting temperature. In calibrating thermoelenients constructed from the platinum and platinum-rhodiuin obtained from Heraus in Hanau from the same stock as that used by Hoebokn and Wiek ') in their well