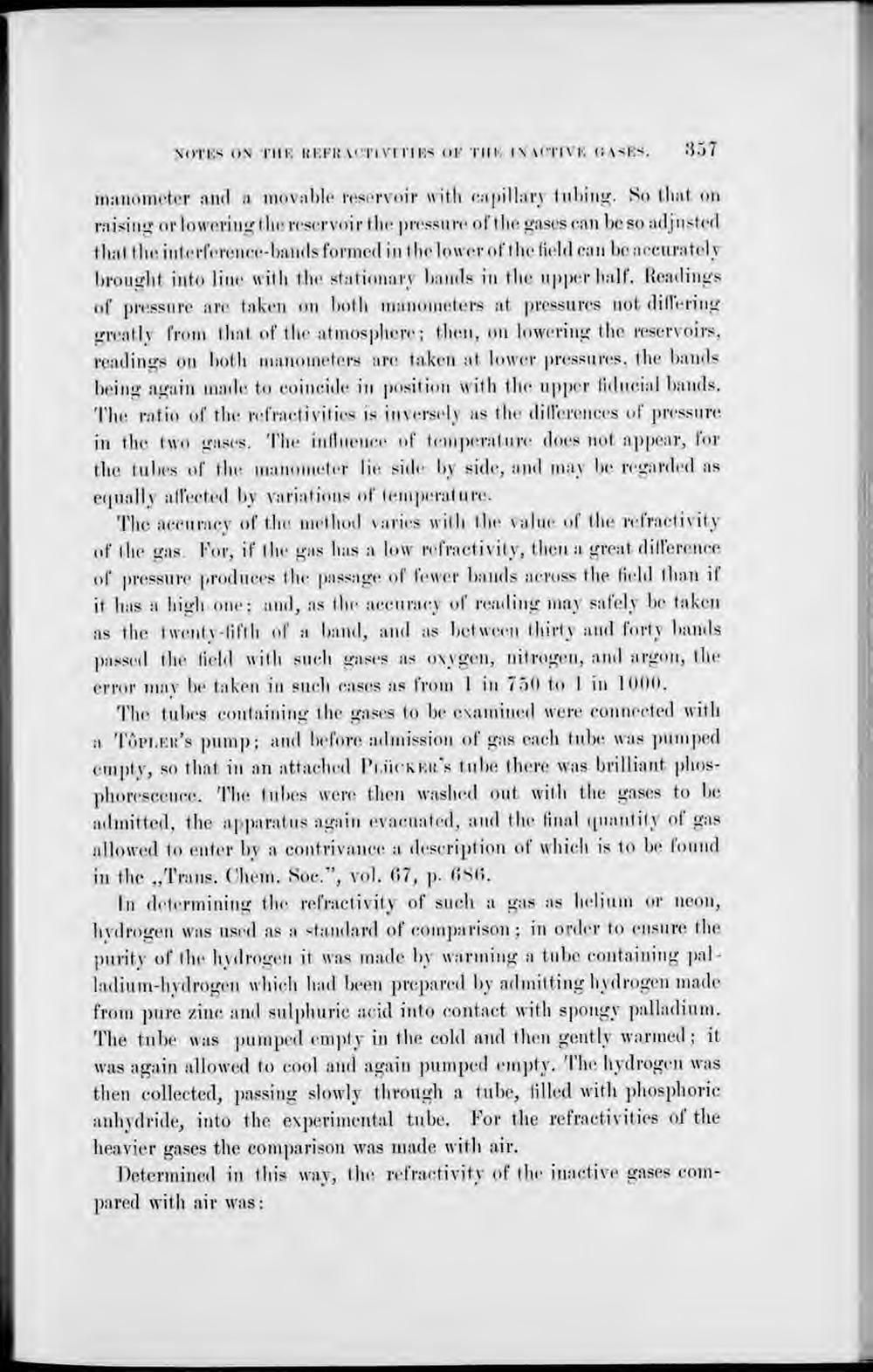 manometer and a movable reservoir with capillary tnbing. So that on raising or lowering the reservoir the pressure of the gases can be so adjnsted that the interference-bands formed in the lowerof the fiehl can be nccurately brought into line with the stationary bands in the upper half. Readings of pressure are taken on bot li manometers at pressures not differing greatlv froni that of the atmosphere; tlien, on lowering the reservoirs, readings on both manometers are taken at lower pressures, the bands being again made to coincide in position with the upper liducial bands. The ratio of the refractivities is inversely as the dill'erences of pressure in the two gases. The intluence of temperature does not appear, for the tubes of the manometer lie side by side, and may be regarded as equally affected by variations of temperature.

The accuracy of the method val ies with the value of the refractivity of the gas. For, it' the gas lias a low refractivity, then a great dillerence of pressure produces the passage of fewer bands across the field than il it lias a high one; and, as the accuracy of reading may safely be taken as tlie twenty-lifth of a band, and as between tliirtv and forty bands passed the field with sucli gases as oxygen, nitrogen, and argon, the error may be taken in sucli cases as froin 1 in 750 to I in 1000.

The tubes containing the gases to be examined were connected with a Tói'I.er's pump; and before admission ot gas each tube was puniped emptv, so that in an attached Pi.i'kker's tube there was brilliant pliosphorescence. The tubes wen; tlien washed out with the gases to be admitted, the apparatus again evacuated, and the final qnantity of gas allowed to enter bv a contrivance a description of which is to be found in the „Trans. Chem. Soc.", vol. 67, ]). (>^(>.

In determining the refractivity of sucli a gas as helium or neon, In drogen was used as a staudard of coinparison ; in order to ensure the purity of the hydrogeu it was made by warming a tube containing palladium-hydrogen which had been prepared by adinitting hydrogen made from pure zinc and sulphuric acid into contact with spongy palladium. The tube was pumped einply in the cold and tlien gently warmed ; it was again allowed to cool and again puniped emptv. 'I he hydrogen was tlien collected, passing slowly through a tube, li lied with phosphoric anhydride, into the experimental tube. For the refractivities of the heavier gases the comparison was made with air.

Determined in this way, the refractivity of the inactive gases coinpared with air was: