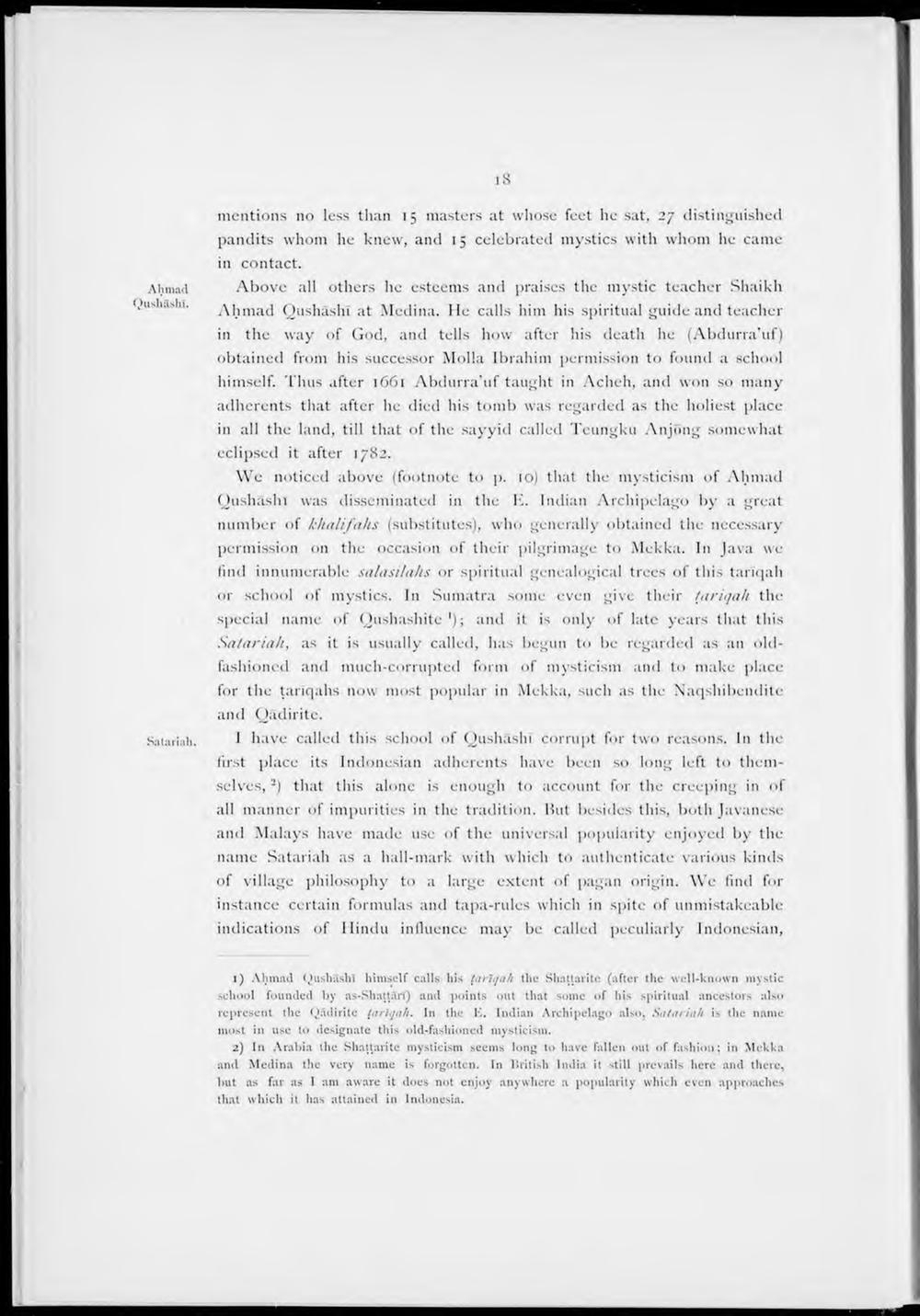 mentions no less than 15 masters at whose fcct he sat, 27 distinguished pandits whom hc knew, and 15 celebrated mystics with whom hc came in contact.

Ahmad Abovc all others he cstcems and praises the mystic teacher Shaikh ush.isiu. Ahmad Qushashl at Medina. Ho calls him his spiritual guide and teacher in the way of God, and tells how aftcr his death he (Abdurra'uf) obtained from his successor Molla Ibrahim permission to found a school himself. Thus aftcr 1661 Abdurra'uf taught in Acheh, and won so many adherents that aftcr hc died his tomb was regarded as the holiest place in all the land, till that of the sayyid called Teungku Anjöng somewhat eclipsed it after 1782.

We noticcd above (footnote to p. 10) that the mysticism of Ahmad Qushashl was disseniinated in the IC. Indian Archipelago by a great number of khalifahs (substitutes), who generally obtained the necessary permission 011 the occasion of their pilgrimage to Mekka. I11 Java we find innumerable salasilahs or spiritual genealogical trees of this tariqah or school of mystics. I11 Sumatra some even givc their tariqah the special name of Qushashite'); and it is only of late years that this Sa/ar/ah, as it is usually called, lias begun to be regarded as an oldfashioned and much-corrupted form of mysticism and to make place for the tariqahs now most popular in Mekka, sucli as the Naqshibendite and Qadirite.

Satariah. I have called this school of Qushashl corrupt for two reasons. I11 the first place its Indonesian adherents have been so long left to themselves, -) that this alone is enougli to account for the creeping in of all manner of impurities in the tradition. Hut besides this, botli Javanese and Malays have made use of the universal popuiarity enjoyed by the name Satariah as a hall-mark with which to authenticatc various kinds of village philosophy to a large extent of pagan origin. We find for instance certain formulas and tapa-rules which in spite of unmistakeable indications of Hindu influence may be called peculiarly Indonesian,

1) Ahmad Qushashl himself calls his tart <] ah the Shattarite (after the well-known mystic school founded by as-Shattari) and points out that some of his spiritual ancestors also represent the Qadirite tariqah. In the E. Indian Archipelago also, Satariah is the name most in use to designate this old-fashioned mysticism.

2) In Arabia the Shattarite mysticism sccms long to have fallen out of fashion; in Mekka and Medina the very name is forgotten. In British India it still prevails herc and there, but as far as I am aware it does not enjoy anywliere a popuiarity which even approaches that which it lias attained in Indonesia.