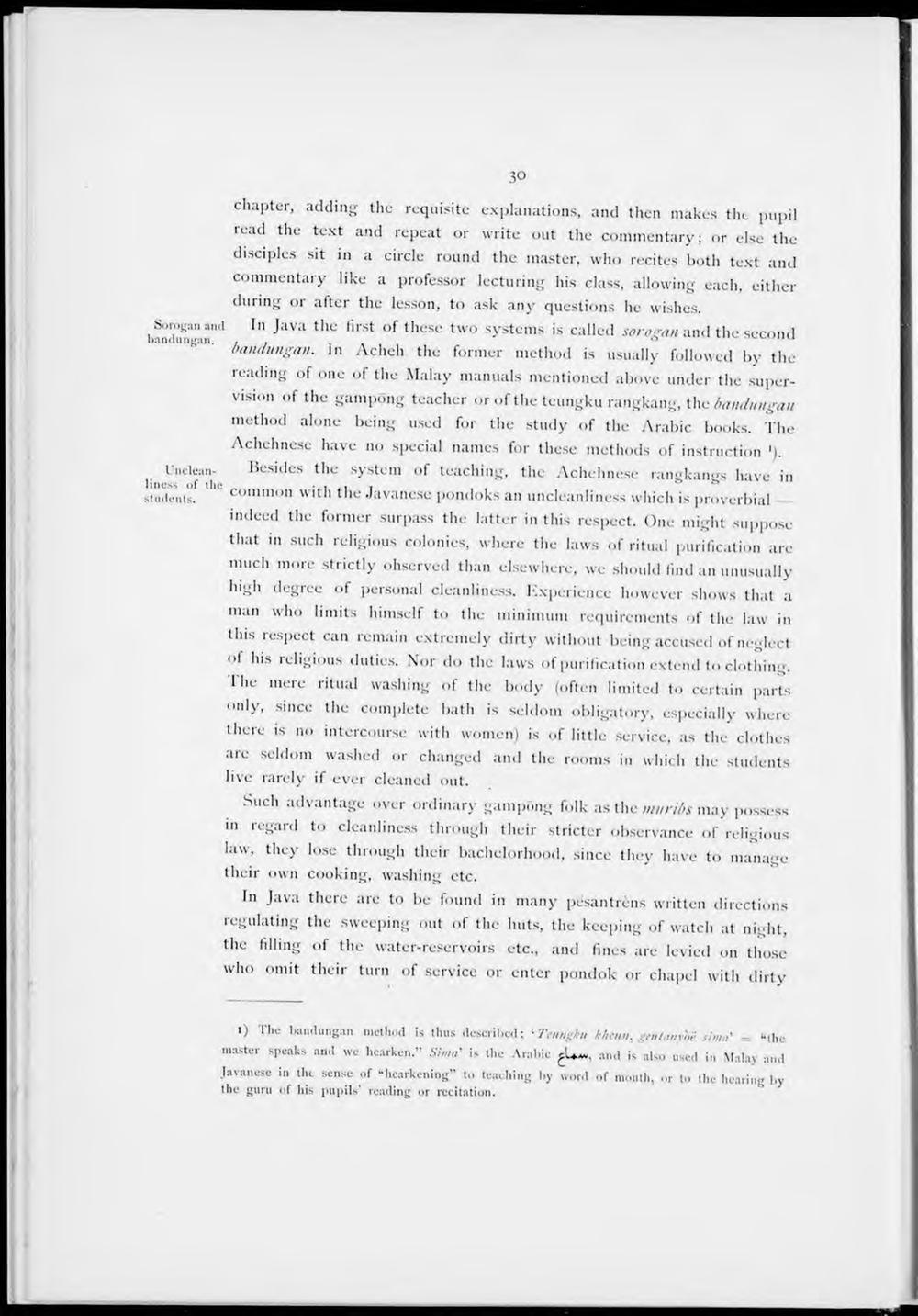 chapter, adding the requisite explanations, and then makes the pupil ïcad the tcxt and repeat or write out the commentary; or else the disciples sit in a circle round the master, who recites both text and commentary like a professor lecturing his class, allowing each, either during or after the lesson, to ask any questions he wishes.

method alone being used for the study of the Arabic books. The

Achehnese have no special names for these mcthods of instruction

Unclean- Besides the system of teaching, the Achehnese rangkanes have in

students. common with the Javanese pondoks an uncleanliness wliicli is proverbial

indeed the former surpass the Jatter in this respect. One might suppose that in such religious colonies, where the laws of ritual purification are much more strictly ohserved than elsewhere, we should find an unusually high degree of personal cleanliness. Experience however shows that a man who limits himself to the minimum requirements of the law in this respect can remain extremely dirty without being accused of neglect of lus religious duties. Nor do the laws of purification extend to clothing. 1 he mere ritual washing of the body (often limited to certain parts only, si nee the complete batli is seldom obligatory, especially where tliere is 110 intercourse with women) is of little service, as the clothes are seldom washed or changed and the rooms in which the students live rarely if ever cleaned out.

Such advantage over ordinary gampong folk as the muribs may possess in regard to cleanliness through their stricter observance of religious law, they lose through their bachelorhood, since tliey have to manage their own cooking, washing etc.

In Java there are to be found in many pësantrèns written directions regulating the sweeping out of the huts, the keeping of watch at niglit, the filling of the water-reservoirs etc., and fines are leviet! 011 those who omit their turn of service or enter pondok or chapel with dirty

master speaks and we hearken." Si,na' is the Arabic and is als» used in Malay and

Javanese in the sense of "hearkening" to teaching by word of mouth, or to the hearing by the guru of li is pupils' reading or rccitation.