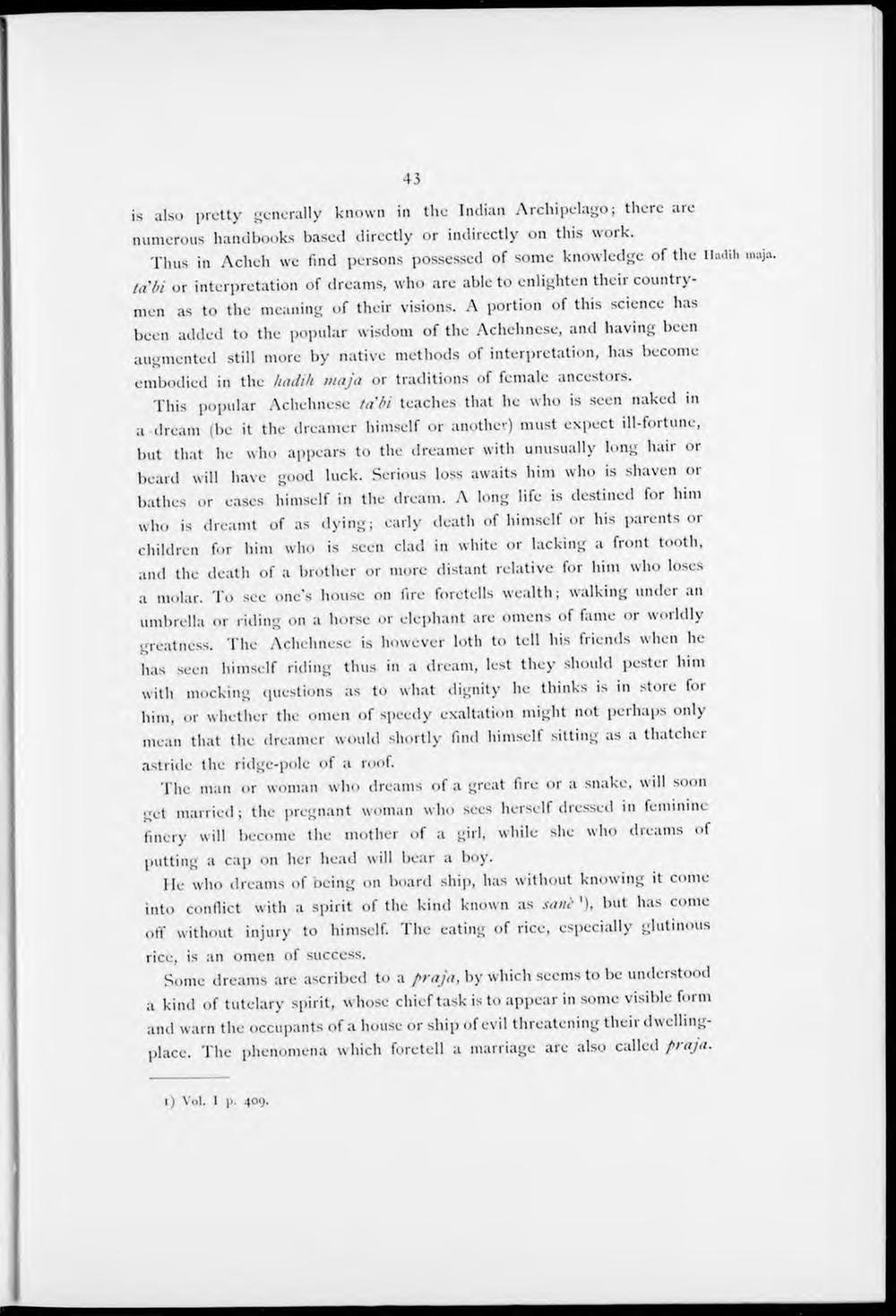 is also pretty generally known tri the Indian Archipelago; tnere atc nuntcrous handbooks based directly or indirectly on this woik.

Thus in Acheh we find persons possessed of some knowledge of the Hadih maja. tiibi or interpretation of dreams, who are able to enlighten their countrymen as to the meatiing of their visions. A portion of this science lias been added to the popular wisdom of the Achehnese, and having been augmented still more by native methods of interpretation, lias become embodied in the hadih maja or traditions of female ancestors.

This popular Achehnese ta bi teaches that he who is seen naked in a dream (be it the dreamer himself or another) must expect ill-fortunc,

but that he who appears to the dreamer with unusually long liair or beard will have good luck. Serious loss awaits him who is shaven or bathes or eases himself in the dream. A long life is destined for him who is dreamt of as dying; early death of himself or his parents or childrcn for him who is seen clad in white or lacking a front tooth,

and the death of a brotlier or more distant relative for him who loses a molar. To see one's house on fire foretclls wealth; walking under an umbrella or riding on a horse or elephant are omens of fame or worldly greatness. The Achehnese is however loth to teil his friends when he lias seen himself riding thus in a dream, lest they should pester him with mocking questions as to what dignity he thinks is in store for him, or whether the omen of speedy exaltation might not perhaps only mean that the dreamer would shortly find himself sitting as a thatcher

astride the ridge-pole of a roof.

The man or woman who dreams of a great fire or a snake, will soon get married ; the pregnant woman who secs herself dressed in feminine finery will become the mother of a girl, while slie who dreams of putting a cap on her head will bear a boy.

He who dreams of being on board ship, lias without knowing it come into conflict with a spirit of the kind known as sanc '), but lias come off without injury to himself. The eating of rice, cspecially glutinous

rice, is an omen of success.

Some dreams are ascribed to a praja, by which seems to be understood a kind of tutelary spirit, whose chief task is to appear in some visible form and wam the occupants of a house or ship of evil threatening their dwellingplace. The phenomena which foretell a marriage are also called praja.