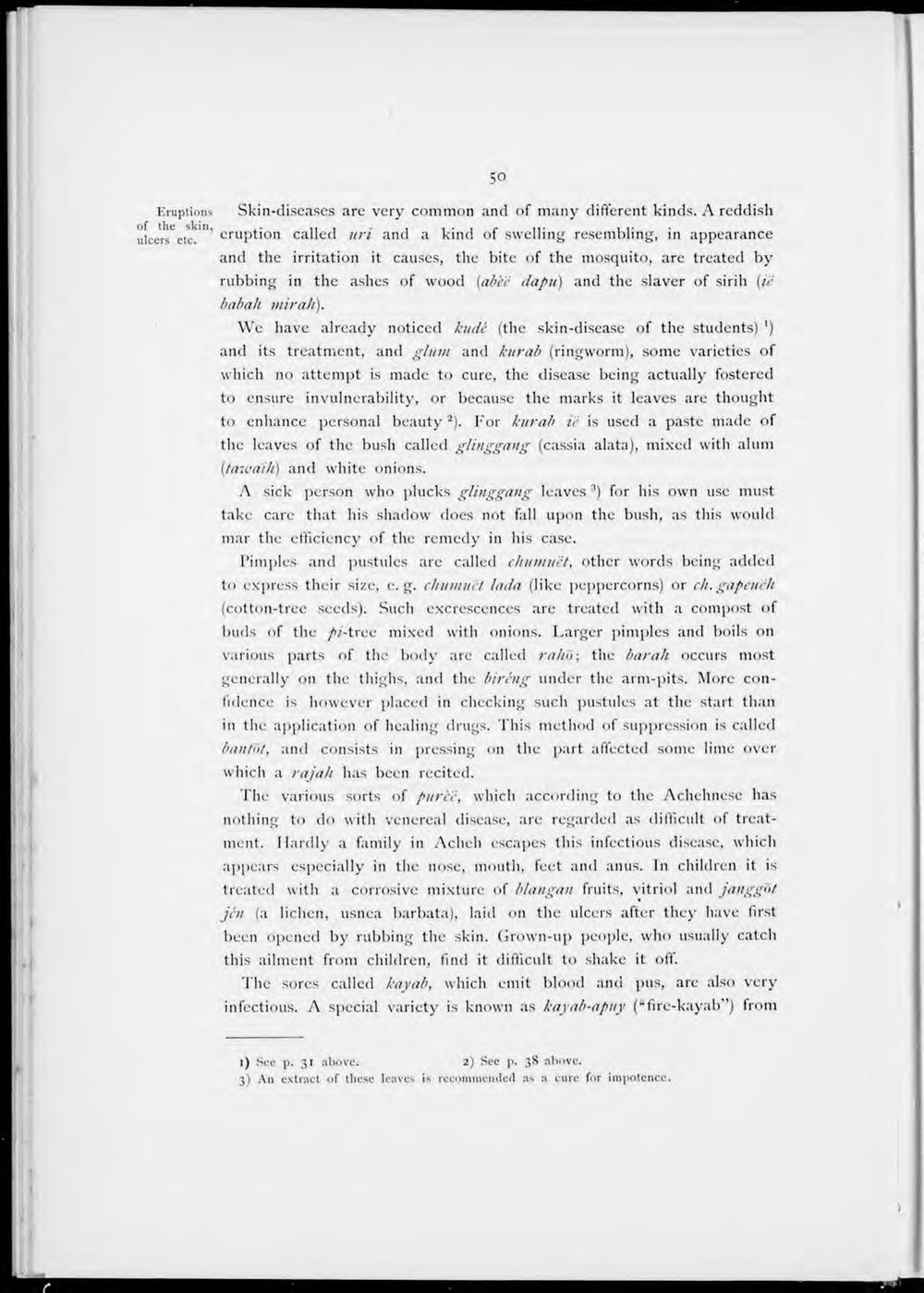 Eruptions Skin-diseases are very common and of many different kinds. A reddish uker^ctc^"1' eruption called uri and a kind of swelling resembling, in appearance and the irritation it causes, the bite of the mosquito, are treated by rubbing in the ashes of wood (abec dapu) and the slaver of sirih (ië babah mirati).

We have already noticed kttdé (the skin-disease of the students) ') and its treatment, and glum and kurab (ringworm), some varieties of which no attempt is made to cure, the disease being actually fostered to ensure invulnerability, or because the marks it leaves are thought to enhance personal beauty2). For kurab iï- is used a paste made of the leaves of the bush called glinggang (cassia alata), mixed with alum (tawaih) and white onions.

A sick person who plucks glinggang leaves n) for his own usc must take care that his shadow does not fall upon the bush, as this would mar the efficiency of the remedy in his case.

Pimples and pustulcs are called chumtïèt, other words being added to express their size, e. g. cliuviuct lada (like peppercorns) or ch.gapeurh (cotton-tree seeds). Such excresccnces are treated with a compost of buds of the pi-tree mixed with onions. Larger pimples and boils on various parts of the body are called rahö; the bar ah occurs most gencrally 011 the thighs, and the birèng under the arm-pits. More confidence is however placed in checking such pustules at the start than in the application of healing drugs. This method of suppression is called bant»t, and consists in pressing on the part affected some linie over which a rajah lias been recited.

The various sorts of puree, which according to the Achehnese lias nothing to do with venercal disease, are regarded as diflicult of treatment. Ilardly a family in Aclieli escapes this infectious disease, which appears especially in the nose, mouth, feet and anus. I11 children it is treated with a corrosive mixture of blangan fruits, vitriol and janggöt jên (a lichen, usnea barbata), laid on the ulcers after they have fïrst been opened by rubbing the skin. Grown-up people, who usually catch this ailment from children, find it difficult to shake it off.

The sores called kayab, which emit blood and pus, are also very infectious. A special variety is known as kayab-apuy ("fire-kayab") from

3) An extract of these leaves is rcconimcnded as a cure for impotcnce.