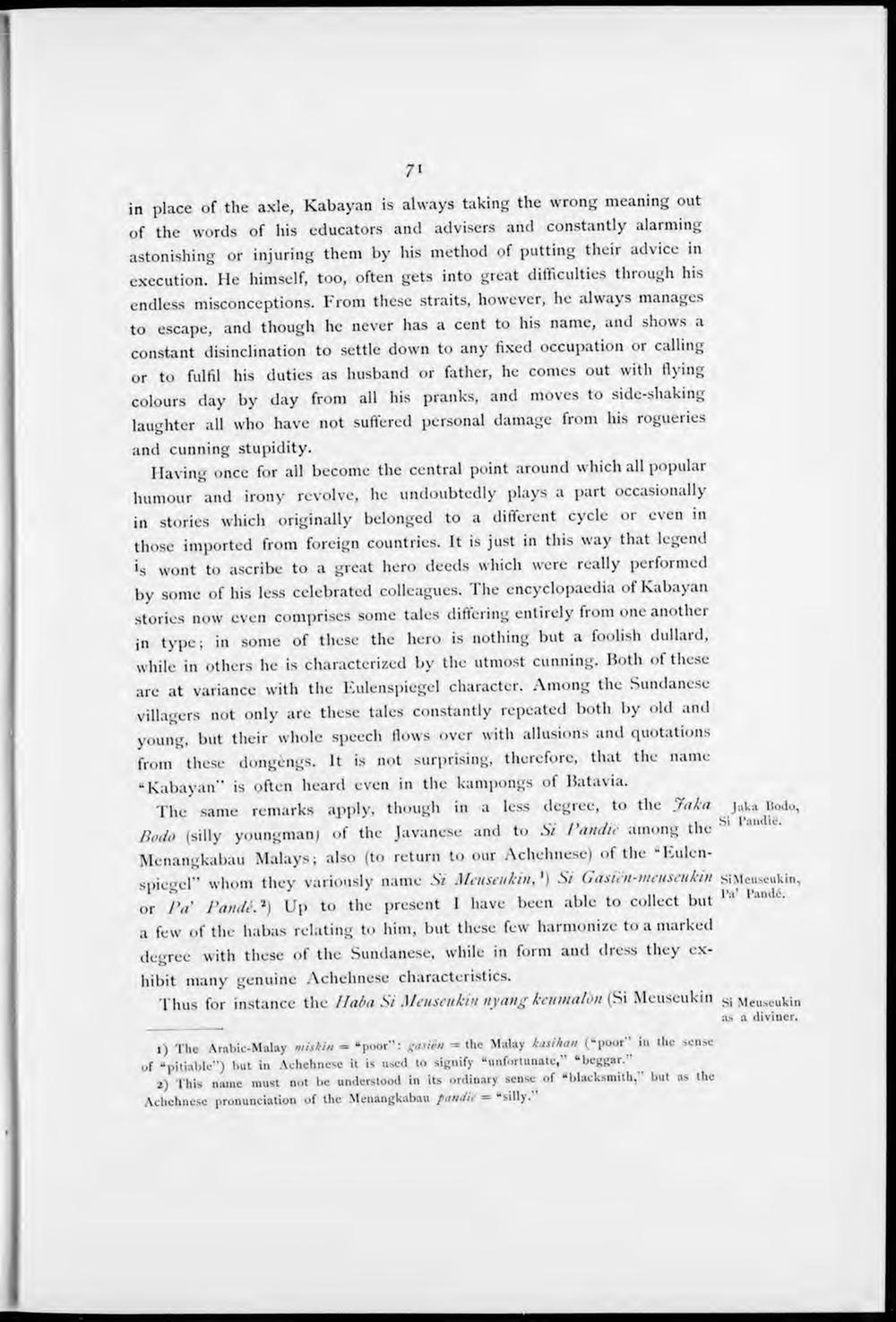 in place of the axle, Kabayan is always taking the wrong meaning out of the words of his educators and advisers and constantly alarming astonishing or injuring them by his method of putting their ad\ice in execution. He himself, too, often gets into great difticulties through his cndless misconceptions. From these straits, however, he always manages to escape, and though he never lias a cent to his name, and shows a constant disinclination to settle down to any fixed occupation or calling or to fulfil his duties as husband or father, he comes out with flying colours day by day from all his pranks, and moves to side-shaking laughter all who have not suffered personal damage from his rogueries

Having once for all become the central point around which all popular humour and irony revolve, he undoubtedly plays a part occasionally in stories which originally belonged to a different cycle or even in those imported from foreign countries. It is just in this way that legend •s wont to ascribe to a great hero deeds which were really performed by some of his less celebrated colleagues. The encyclopaedia of Kabayan stories now even comprises some tales differing entirely from one another in type; in some of these the hero is nothing but a foolish dullard,

while in others he is characterized by the utmost cunning. Both of these are at variance with the Eulenspiegel character. Among the Sundanese villagers not only are these tales constantly repeated both by old and young, but their whole speech flovvs over with allusions and quotations from these dongèngs. It is not surprising, therefore, that the name "Kabayan" is often heard even in the kampongs of Batavia.

The same remarks apply, though in a less degree, to the Jaka jaka iiodo,

Menangkabau Malays; also (to return to our Achehnese) of the "Eulenspiegel" whom they variously name Si Meuseukin,') Si Gasiën-meuseuktn siMcuseukin, or Pa' Pandé.'1) Up to the present 1 have been able to collect but a few of the habas relating to him, but these few harmonize to a marked degree with these of the Sundanese, while in form and dress they exhibit many genuine Achehnese characteristics.

1) The Arabic-Malay miskin = "poor": gasién = the Malay kus Hum ("pooi in the sense of "pitiable") hut in Achehnese it is used to signify "unfortunate, "beggar.

2) This name must not be understood in its ordinary sense of "blacksmith, but as the Achehnese pronunciation of the Menangkabau pandic = "silly."'