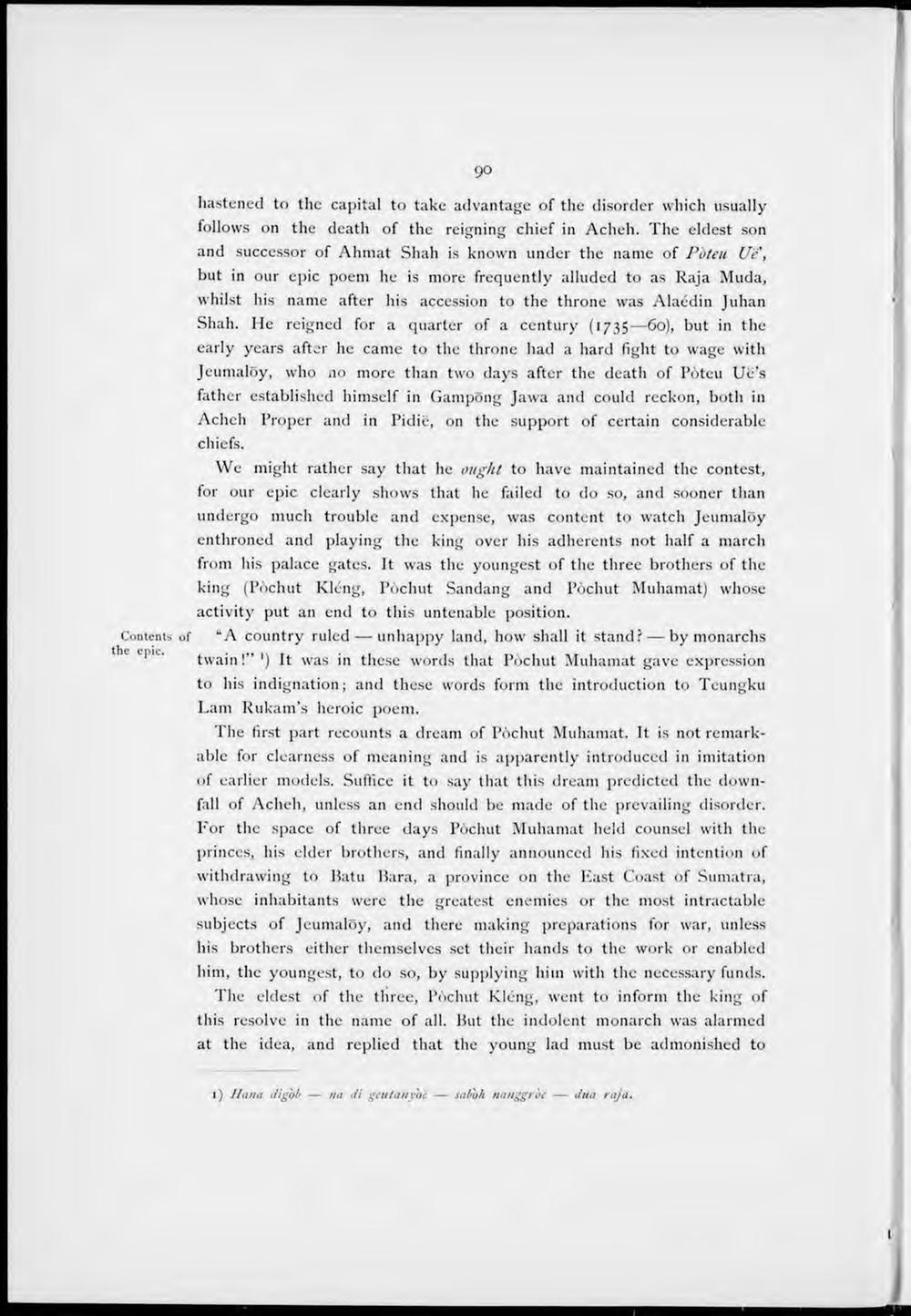 hastened to the capital to take advantage of the disorder vvhich usually follows on the death of the reigning chief in Acheh. The eldest son and successor of Ahmat Shah is known under the name of Poten U'e, but in our epic poem he is more frequently alluded to as Raja Muda, whilst his name after his accession to the throne was Alaédin Juhan Shah. He reigned for a quarter of a century (1735—60), but in the early years after he came to the throne had a hard fight to wage with Jeumalöy, who 110 more tlian two days after the death of Pöteu Uë's father established himself in Gampöng Jawa and could reckon, botli in Acheh Proper and in Pidië, on the support of certain considerable chiefs.

We might rather say that he ought to have maintained the contest, for our epic clearly shows that he failed to do so, and sooner tlian undergo much trouble and expense, was content to watch Jeumalöy enthroned and playing the king over his adherents not half a march from his palace gates. It was the youngest of the three brothers of the king (Pöchut Kléng, Pöchut Sandang and Póchut Muhamat) whose activity put an end to this untenable position.

Contents of "A country ruled — unhappy land, how shall it stand? — by monarchs twain!" ') It was in these words that Póchut Muhamat gave expression to his indignation; and these words form the introduction to Teungku Lam Rukam's heroic poem.

The first part recounts a dream of Póchut Muhamat. It is not remarkable for clearness of meaning and is apparently introduced in imitation of earlier models. Suffice it to say that this dream predicted the downfall of Acheh, unless an end should be made of the prevailing disorder. For the space of three days Póchut Muhamat held counsel with the princes, his elder brothers, and finally announced his fixed intention of withdrawing to Batu Bara, a province 011 the Kast Coast of Sumatra, whose inhabitants were the greatest enemies or the most intractable subjects of Jeumalöy, and there making preparations for war, unless his brothers either themselves set their hands to the work or enabled him, the youngest, to do so, by supplying hitn with the necessary funds.

The eldest of the three, Pöchut Kléng, went to inform the king of this resolve in the name of all. But the indolent monarch was alarmed at the idea, and replied that the young lad must be admonished to