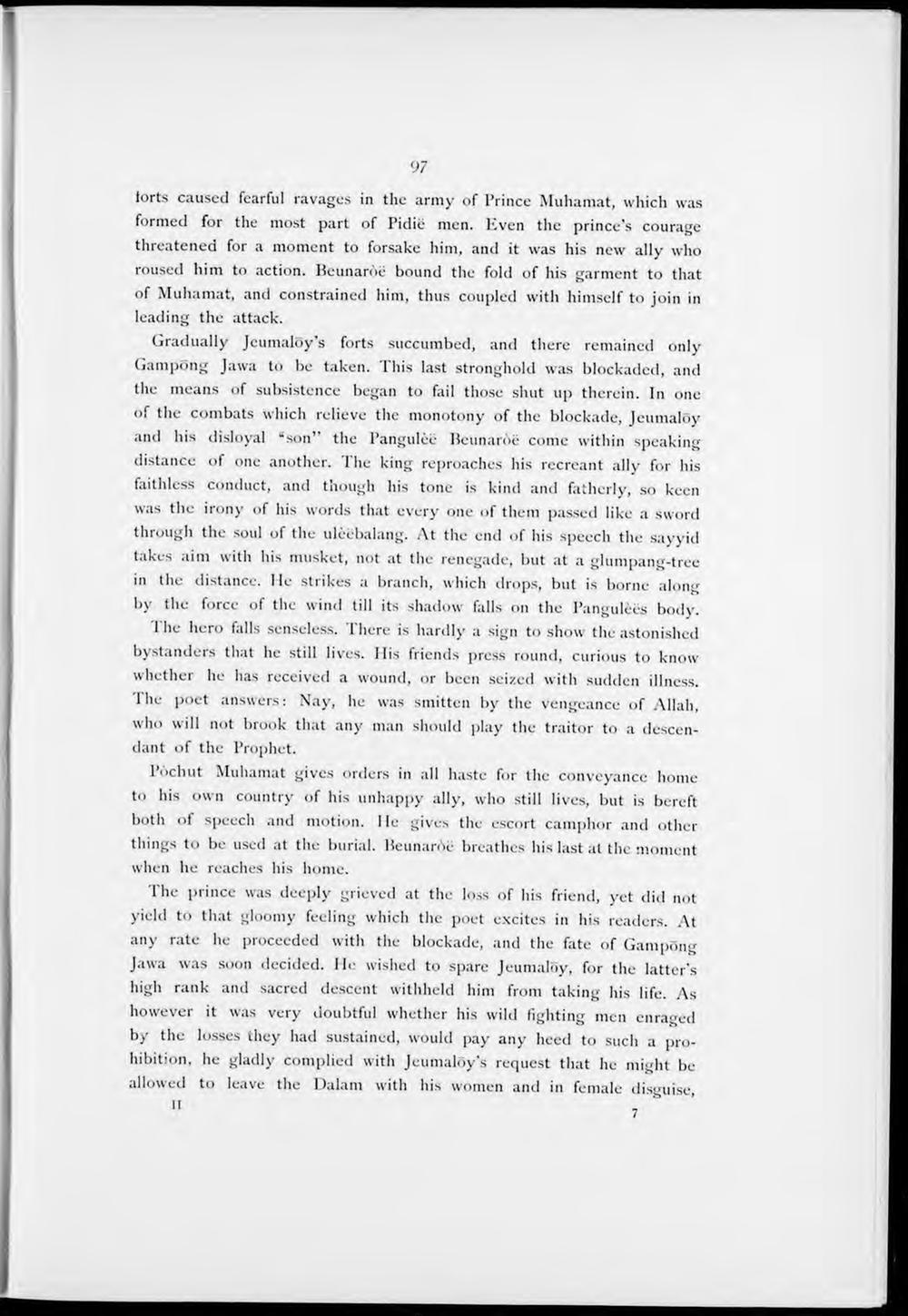 forts caused fearful ravages in the army of Prince Muhamat, which was formeel for the most part of Pidië men. liven the prince's courage threatened for a moment to forsake him, and it was his new ally who roused him to action. Beunaróë bound the fold of his garment to that of Muhamat, and constrained him, thus coupled with himself to join in leading the attack.

Gradually Jeumaloy's forts succumbed, and there remained only Gampöng Jawa to be taken. This last stronghold was blockaded, and the means of subsistence began to fail those shut up therein. In one of the combats which relieve the monotony of the blockade, Jeumalöy and his disloyal "son" the Pangulèë Beunaróë come within speaking distance of one another. The king reproaches his recreant ally for his faithless conduct, and though his tone is kind and fatherly, so keen was the irony of his words that every one of them passed like a sword through the soul of the ulèëbalang. At the end of his speech the sayyid takes aim with his musket, not at the renegade, but at a glumpang-tree in the distance. He strikes a branch, which drops, but is borne along by the force of the wind till its shadow falls on the Pangulèës body.

I he hero falls senseless. I here is hardly a sign to show the astonished bystanders that he still lives. Ilis friends press round, curious to know whether he lias received a wound, or been seized with sudden illness. The poet ansvvers: Nay, he was smitten by the vengeance of Allah, who will not brook that any man should play the traitor to a descendant of the Prophet.

1 ochut Muhamat gives orders in all haste for the conveyance home to his own country of his unhappy ally, who still lives, but is bereft both of speech and motion. I le gives the escort camphor and other things to be used at the burial. Beunaróë breathes his last at the moment when he reaches his home.

The prince was deeply grieved at the loss of his friend, yet did not yield to that gloomy feeling which the poet excites in his readers. At any rate he proceeded with the blockade, and the fate of Gampöng Jawa was soon decided. He wished to spare Jeumalöy, for the latter's high rank and sacred descent withheld him from taking his life. As however it was very doubtful whether his wild fighting men enraged by the losses they had sustained, would pay any heed to sucli a prohibition, he gladly complied with Jeumaloy's request that he might be allowed to leave the Dalam with his women and in female disguise,