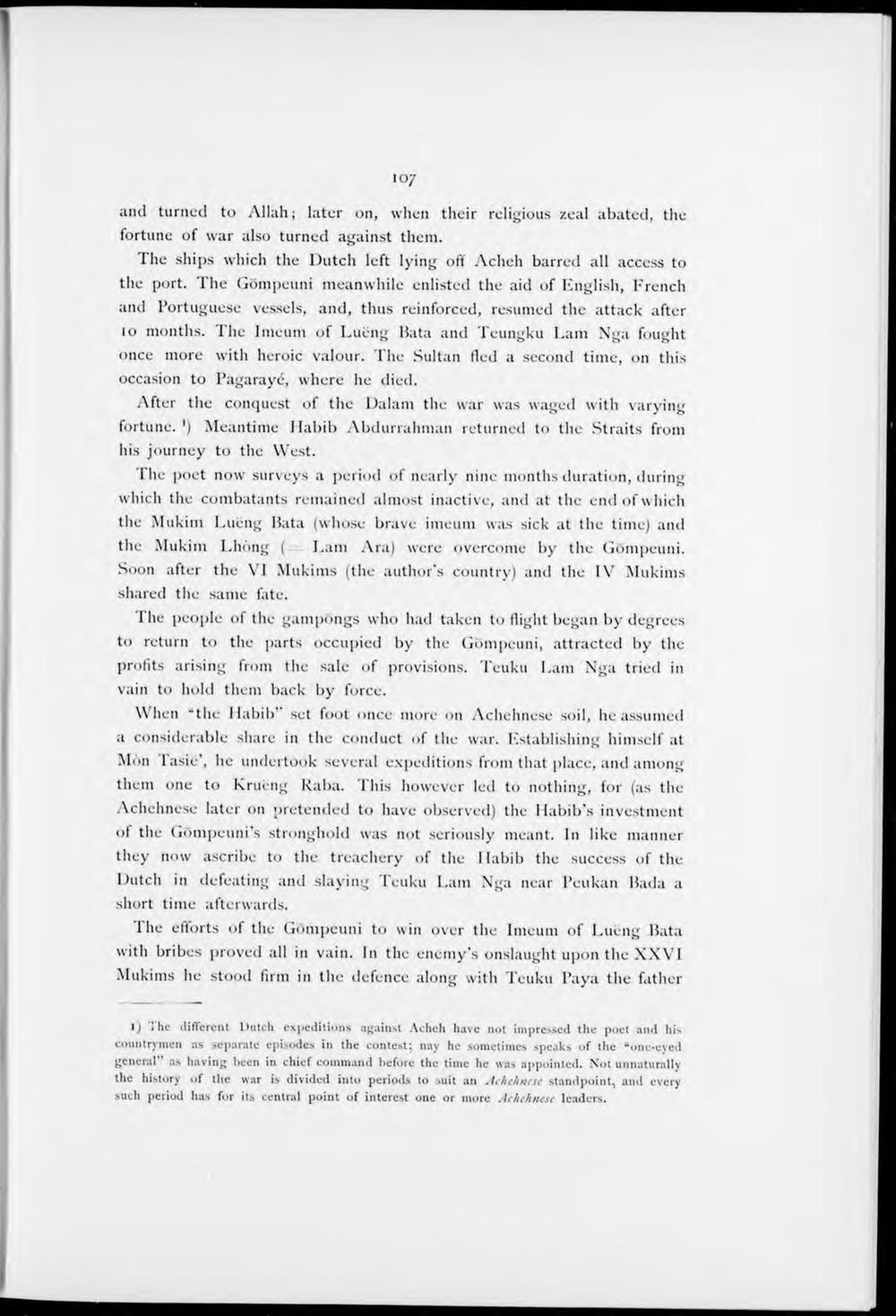 and turned to Allah; later on, when their religious zeal abated, the fortune of war also turned against them.

Ihe ships which the Dutch left lying off Acheh barred all access to the port. The Gömpeuni meanwhile enlisted the aid of English, French and Portuguese vessels, and, thus reinforced, resumed the attack after 10 months. The Imeum of Luëng Bata and Teungku Lam Nga fought once more with heroic valour. 1 he Sultan fled a second time, on this occasion to Pagarayé, where he died.

After the conquest of the Dalam the war was waged with varying fortune.1) Meantime Habib Abdurrahman returned to the Straits from his journey to the West.

1 he poet now surveys a period of nearly nine months duration, during which the combatants remained almost inactive, and at the end of which the Mukim Luëng Bata (whose brave imeum was sick at the time) and the Mukim Lhong ( Lam Ara) were overcome by the Gömpeuni. Soon after the VI Mukims (the author's country) and the IV Mukims shared the same fate.

The people of the gampöngs who had taken to flight began by degrees to return to the parts occupied by the Gömpeuni, attracted by the profits arising from the sale of provisions. Teuku Lam Nga tried in vain to hold them back by force.

When "the Habib' set foot once more on Achehnese soil, he assumed a considerable share in the conduct of the war. Establishing himself at Mon Tasië', he undertook several expeditions from that place, and among them one to Kruëng Raba. This however led to nothing, for (as the Achehnese later 011 pretended to have observed) the I labib's investment of the Gömpeuni's stronghold was not seriously meant. In like manner they now ascribe to the treachery of the I labib the success of the Dutch in defeating and slaying Teuku Lam Nga near Peukan Bada a short time afterwards.

Ihe efforts of the Gömpeuni to win over the Imeum of Luëng Bata with bribes proved all in vain. In the enemy's onslaught upon the XXVI Mukims he stood firm in the defence along with Teuku Paya the father

1) »hc different Dutch expeditions against Acheh have not impressed the poet and his country men as separate episodes in the contest; nay he sometimes speaks of the wonc-eyed general" as having been in chief command before the time he was appointed. Not unnaturally the history of the war is divided into periods to suit an Achehnese standpoint, and every such period has for its central point of interest one or more Achehnese leaders.