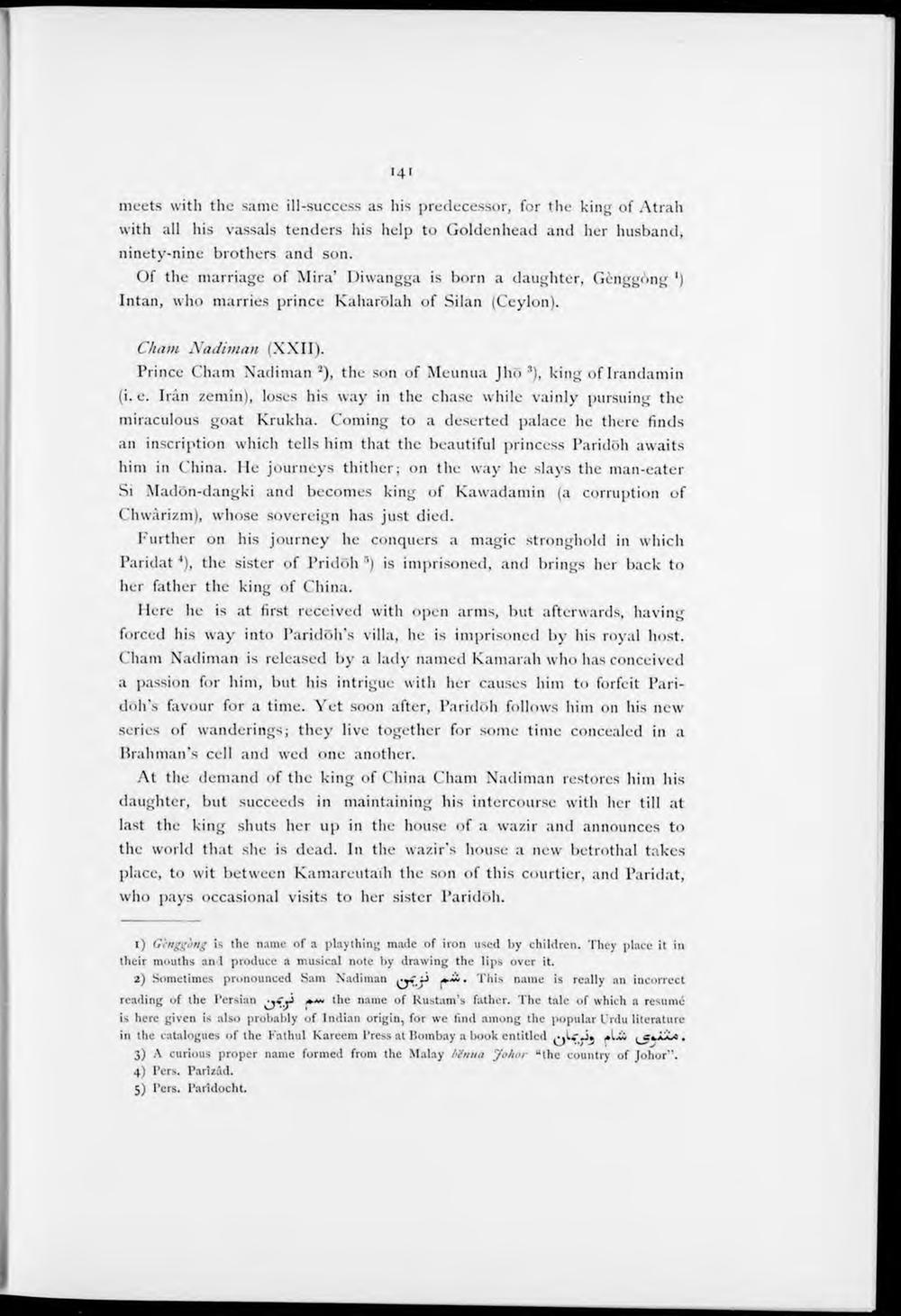 meets with the same ill-success as his predecessor, for the king of Atrah with all his vassals tenders his help to Goldenhead and her husband, ninety-nine brothers and son.

Of the marriage of Mira' Diwangga is born a daughter, Gènggóng ') Intan, who marries prince Kaharölah of Silan (Ceylon).

Prince Cham Nadiman 2), the son of Meunua Jhö 3), king of Irandamin (i. e. Iran zemin), loses his way in the chase while vainly pursuing the miraculous goat Krukha. Coming to a deserted palace he there finds an inscription which tells him that the beautiful princess Paridöh avvaits him in China. He journeys thither; on the way he slays the man-eater Si Madön-dangki and becomes king of Kawadamin (a corruption of Chwarizm), whose sovereign has just died.

Further on his journey he conquers a magie stronghold in which Paridat4), the sister of Pridöh r>) is imprisoned, and brings her back to her father the king of China.

Here he is at first received with open arms, but afterwards, having forced his way into Paridöh's villa, he is imprisoned by his royal host. Cham Nadiman is released by a lady named Kamarah who has conceived a passion for him, but his intrigue with her causes him to forfeit Paridöh's favour for a time. Yet soon after, Paridöh follows him 011 his new series of wanderings; they live together for some time concealed in a Brahman's cell and wed one another.

At the demand of the king of China Cham Nadiman restores him his daughter, but succeeds in maintaining his intercourse with her till at last the king shuts her up in the house of a wazir and announces to the world that she is dead. In the wazir's house a new betrothal takes place, to wit between Kamareutaih the son of this courtier, and Paridat, who pays occasional visits to her sister Paridöh.

1) Gïnggöng is the name of a plaything made of iron used by children. They place it in their mouths an 1 produce a musical notc by drawing the lips over it.

2) Somctimes pronounced Sam Nadiman cf~? r~- Th is name is really an incorrect reading of the Persian the name of Rustam's father. The tale of which a resumé is here given is also probably of Indian origin, for we find among the popular Urdu literature in the catalogues of the Fathui Kareem Press at Bombay a book entitled qU" J3 ,*1X0 .