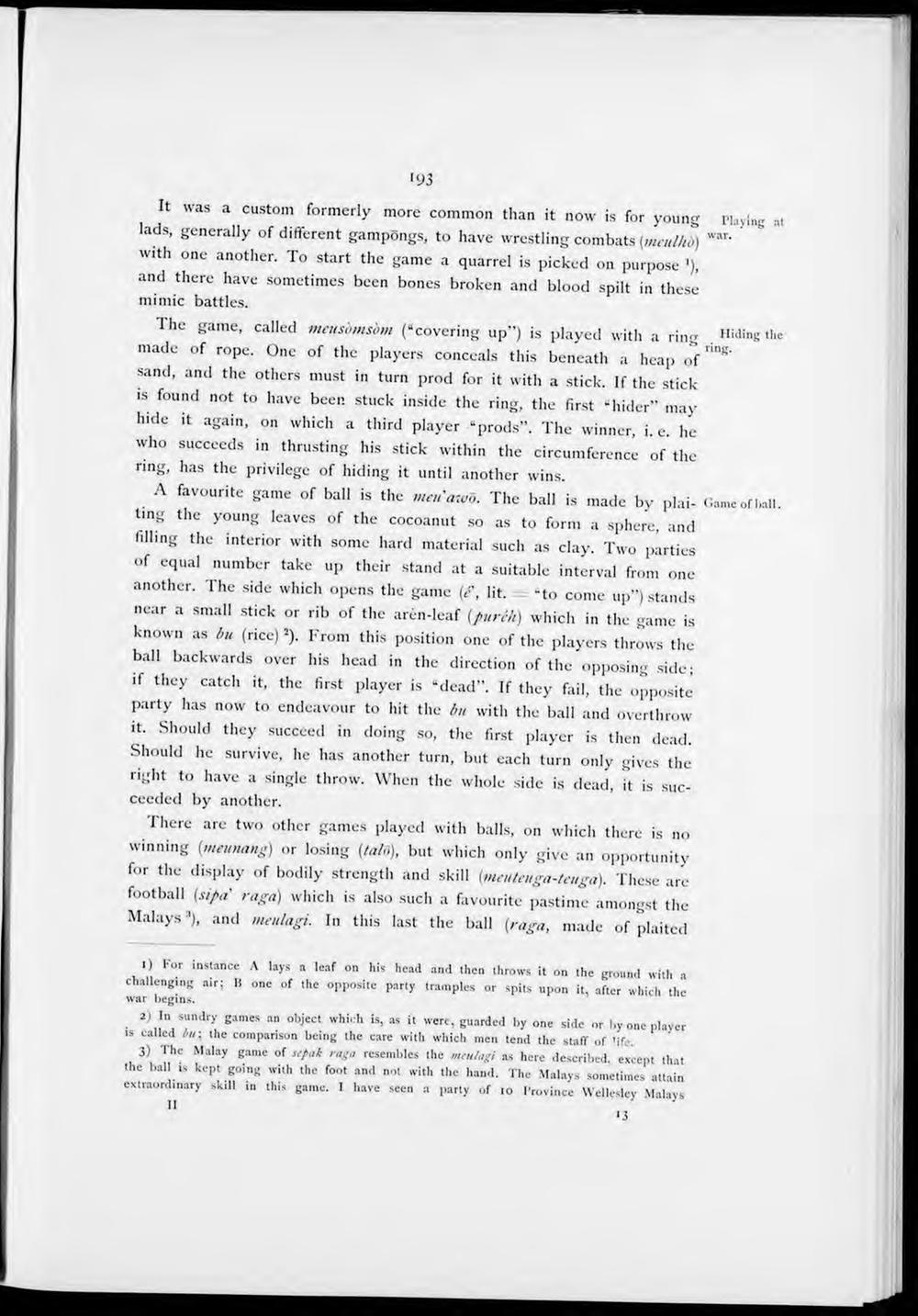 with one another. To start the game a quarrel is picked on purpose '),

and there have sometimes been bones broken and blood spilt in these mimic battles.

The game, called meusomsbm ("covering up") is played with a ring IIid'°g the made of rope. One of the players conceals this beneath a heap of "ng'

sand, and the others must in turn prod for it with a stick. If the stickis found not to have been stuck inside the ring, the first 'hider" may hide it again, on which a third player "prods". The winner, i. e. he who succeeds in thrusting his stick within the circumference of the ring, has the privilege of hiding it until another wins.

A favourite game of ball is the meuawo. The ball is made by plai- Game of ball. ting the young leaves of the cocoanut so as to form a sphere, and filling the interior with some hard material sucli as clay. Two parties Of equal number take up their stand at a suitable interval from one another. The side which opens the game (e, lit. «to come up") stands near a small stick or rib of the arèn-leaf (purék) which in the game is known as bu (rice)2). From this position one of the players throws the ball backwards over his head in the direction of the opposing side;

Should he survive, he has another turn, but each turn only gives the right to have a single throw. When the whole side is dead, it is succeeded by another.

There are two other games played with balls, on which there is no winning (meunang) or losing (talö), but which only give an opportunity for the display of bodily strength and skill (meuteuga-teuga). These are football (sipa raga) which is also such a favourite pastime amongst the Malays3), and meulagi. In this last the ball (raga, made of plaited

.) For instance A lays a leaf on his head and then throws it on the ground with a

thallenging air; B one of the opposite party tramples or spits upon it, after which the war begins.

2) In sundry games an object whi.h is, as it were, guarded by one side or by one player is called 011; the comparison being the care with which men tend the staff of 'ifc.

3) The Malay game of sefak raga resembles the meulagi as here described, except that the ball is kept going with the foot and not with the hand. The Malays sometimes attain extraordinary skill in this game. I have seen a party of io 1'rovince Wellesley Malays