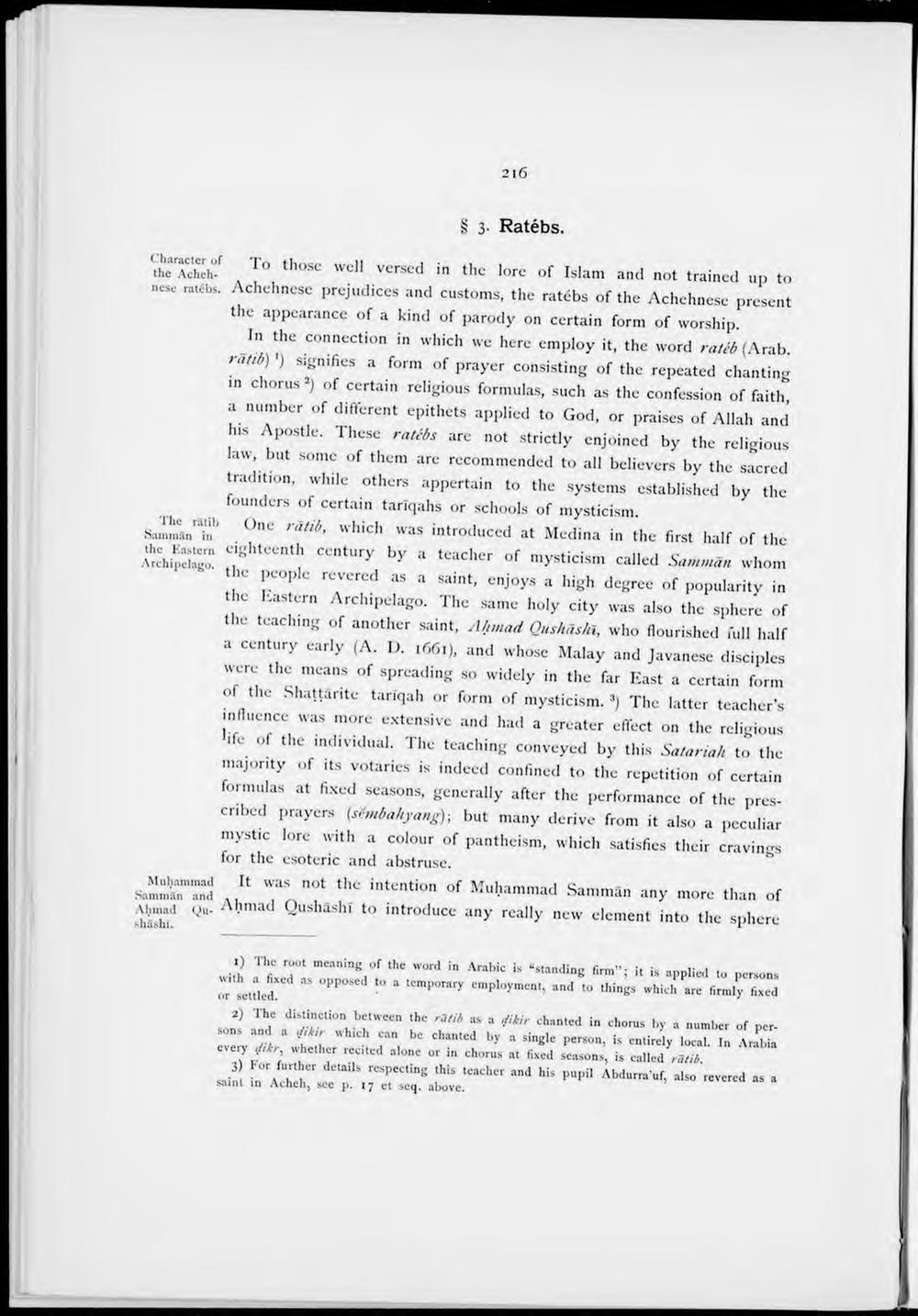 nese ratébs. Achehnese prejudices and customs, the ratébs of the Achehnese present the appearance of a kind of parody on certain form of worship In the connection in which we here employ it, the word ratéb (Arab.

\Ut ) ] SI«n,fies a form of prayer consisting of the repeated chanting in chorus») of certain religious formulas, such as the confession of faith, a number of different epithets applied to God, or praises of Allah and lis Apostle. 'I hese ratébs are not strictly enjoined by the religious aw, but some of them are recommended to all believers by the sacred tradition, while others appertain to the systems established by the founders of certain tarlqahs or schools of mysticism.

Archipclago! by a teacher of mysticism called Whom

k people revered as a saint, enjoys a high degree of popularity in he Kastern Archipelago. The same holy city was also the sphere of the teaching of another saint, Ahmad Qushashi, who flourished full half a ccntury carly (A. I). 1661), and whose Malay and Javanese disciples were the means of spreading so widely in the far East a certain form o t ie Shattante tarïqah or form of mysticism. ') The latter teacher's influence was more extensive and had a greater effect on the religious

° C lndlvldual- The teaching conveyed by this Satariah to the majonty of its votaries is indeed confined to the repetition of certain formulas at fixed seasons, generally after the performance of the prescr.bed prayers {shnbahyang)- but many derive from it also a peculiar mystic lore with a colour of pantheism, which satisfies their cravin-s for the esoterie and abstruse.

«) The root meaning of the word in Arahie is "standing firm"; it is applied to persons or settled " ^ '° * tCmP°rary empl°yment' and 'hings which are firmly fixed

2) The distinction between the ratib as a dikir chanted in chorus by a number of persons and a d,k,r which can be chan.ed by a single person, is entirely locaT ln Arabia \ v t \ T reC'te aI°ne 01' in Ch°rus at fixed seasons> is called ratib

sai f;rAfT " ailS respec,ing ,hiS teaCher and hiS pupil also revered as a