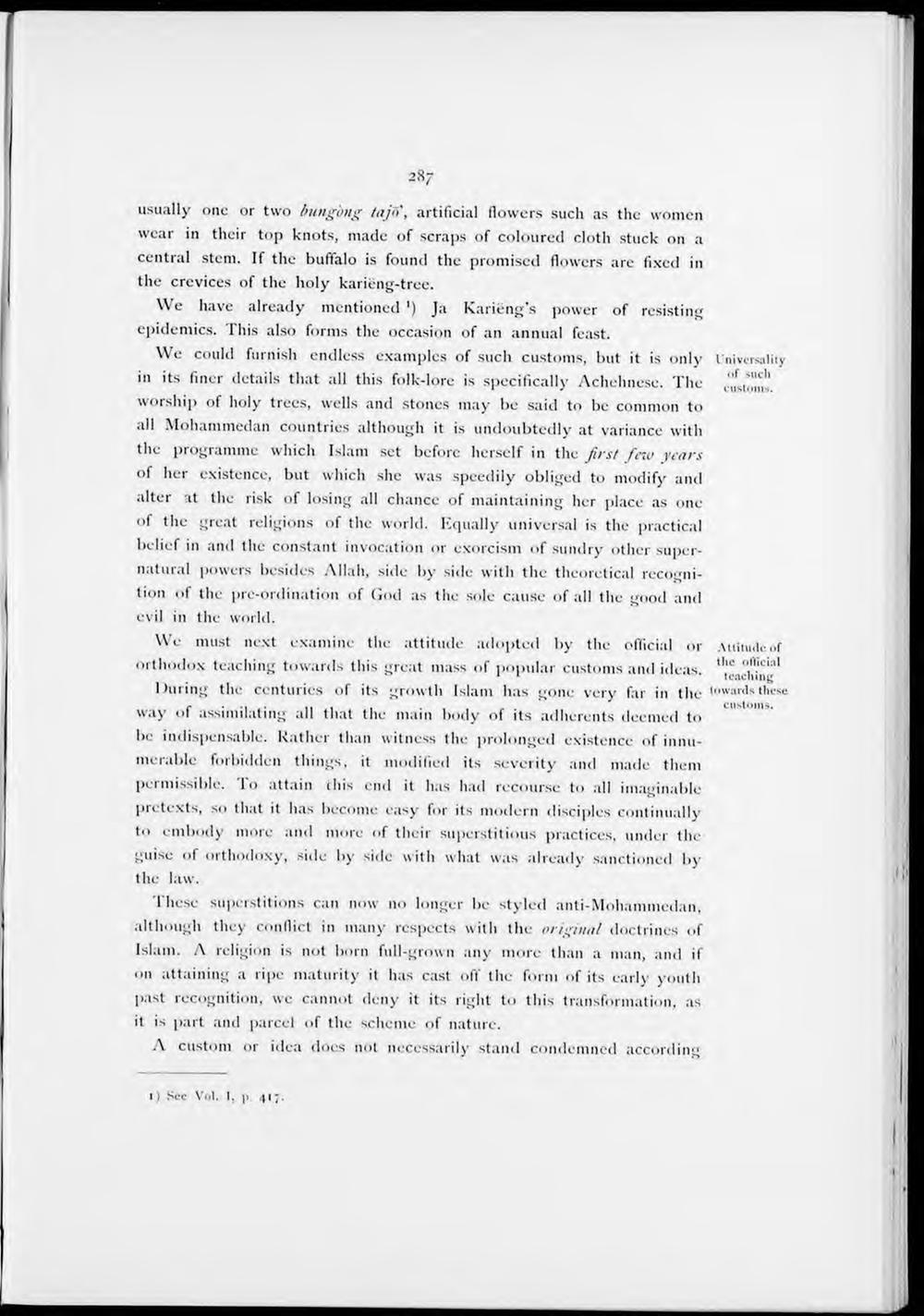 usually onc or tvvo bungong tajn, artificial flowers such as the women wcar in thcir top knots, made of scraps of coloured cloth stuck on a central stem. If the buffalo is found the promised flowers are fixed in the crevices of the holy kariëng-tree.

We could furnish endless examples of such customs, but it is only l'nivcrsality in its finer details tliat all this folk-lore is specifically Achehnese. The c"[st^ worship of holy trees, wells and stones may be said to be common to all Mohammedan countrics although it is undoubtedly at variance witli the programme which Islam set before herself in the first few years of her existence, but which she was speedily obliged to modify and alter at the risk of losing all chance of maintaining her place as one of the great religions of the world. Equally universal is the practical belief in and the constant invocation or exorcism of sundry other supernatural powers besides Allah, side by sidc with the theoretical recognition of the pre-ordination of God as the sole causc of all the good and evil in the world.

We must next examine the attitude adopted by the official or Attitude of orthodox teaching towards this great mass of popular customs and ideas. ''^achinj?1

During the centuries of its growth Islam has gone very far in the towards these way of assimilating all that the main body of its adherents deemed to c"sl"""' be indispensable. Rather tlian witness the prolonged existence of innumerable forbidden things, it modified its severity and made theni permissible. lo attain this end it has had recourse to all itnaginable pretexts, so that it has become easy for its modern disciples continually to embody more and more of thcir superstitious practices, under the guise of orthodoxy, side by sidc with what was already sanctioned by the law.

These superstitious can now no longer be styled anti-Mohammedan,

although they conflict in many respects with the original doctrines of Islam. A rcligion is not boni full-grown any more tlian a man, and if 011 attaining a ripc maturity it has cast off the fornt of its early youth past recognition, we cannot deny it its right to this transformation, as it is part and parcel of the scheme of nature.

A custom or idea does not necessarily stand condemned according