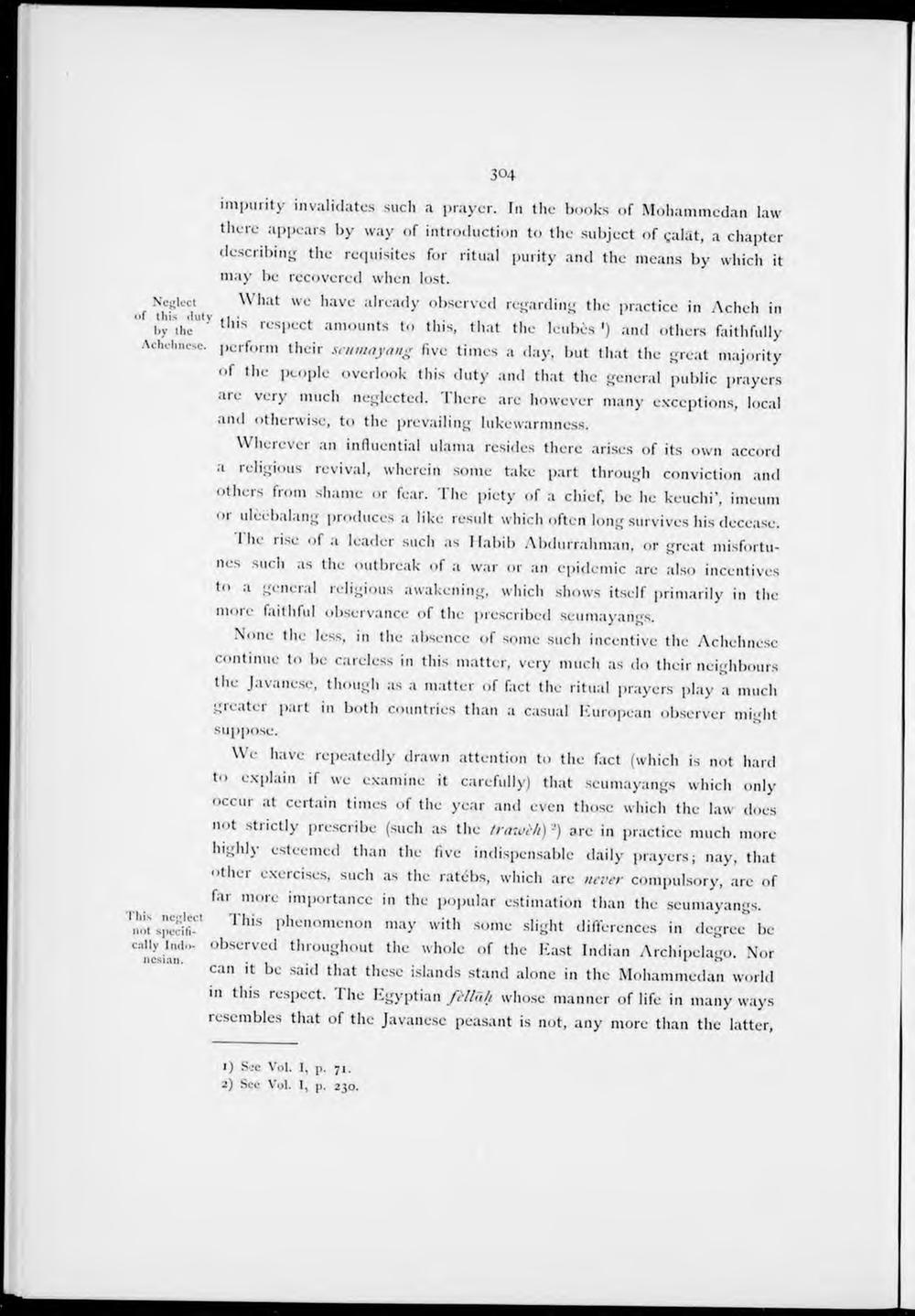 impurity invalidatos sucli a prayer. In the books of Mohammedan law the re appears by way of introduction to the subject of galat, a chapter describing the requisites for ritual purity and the means by which it may be recovered when lost.

by the thls rcsPect amounts to this, that the leubès ') and others faithfully Achehnese. perform their scumayang five times a day, but that the great majority of the people ovcrlook this duty and that the general public prayers are very niuch neglected. 1 liere are however many exccptions, local .ind otherwise, to the prevailing lukewarmness.

Wherever an influential ulama resides there arises of its own accord .1 religious revival, wherein some take part through conviction and others from shamc or fear. The piety of a chief, be he keuchi', imeum or ulèebalang produces a like result which often long survives his decease.

I he rise of a leader sucli as Habib Abdurrahman, or great misfortunes sucli as the outbreak of a war or an epidemie are also incentives to a general religious awakening, which shows itself primarily in the more faithful observance of the prescribed seumayangs.

None the less, in the absence of some sucli incentivc the Achehnese continue to be careless in this matter, very much as do their neighbours the Javanese, though as a matter of fact the ritual prayers play a much gieater part in botli countries than a casual European observer miglit suppose.

We have repeatedly drawn attention to the fact (which is not hard to explain if we examine it carefully) that seumayangs which only occur at certain times of the year and even thosc which the law does not stiictly prescribe (sucli as the trawèh) -') are in practice much more highly esteemed than the five indispensable daily prayers; nay, that other exercises, sucli as the ratébs, which are ncver compulsory, are of fai more importance in the popular estimation than the seumayangs.

cally Indo- observed throughout the whole of the East Indian Archipelaeo Nor ncsmn. . 1 t-> • '

can it be sa ui that these islands stand alone in the Mohammedan world in this respect. Ihe Egyptian fellah whose manner of life in many ways resembles that of the Javanese peasant is not, any more than the latter,