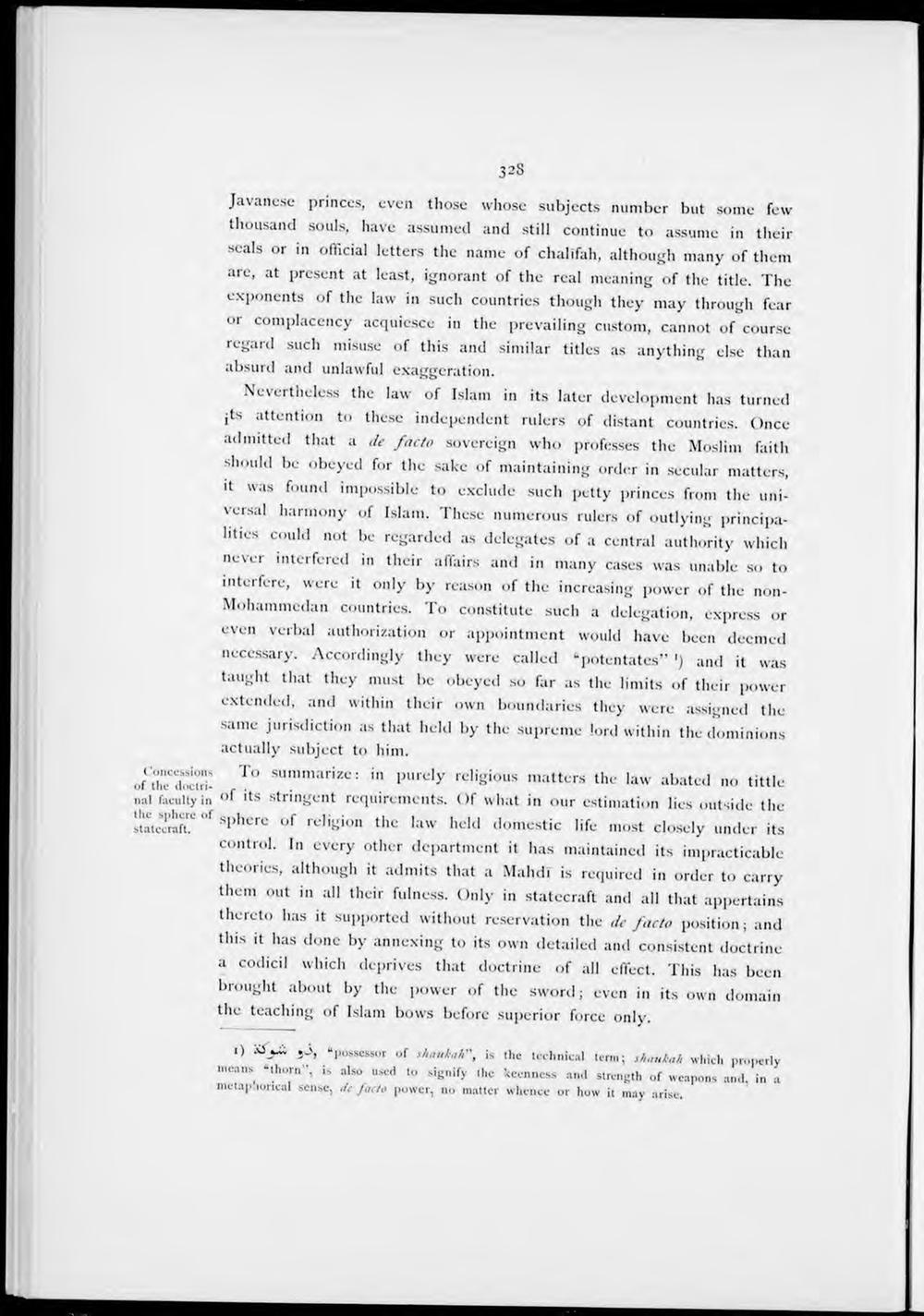 Javanese princes, even those whose subjects numbcr but some few thousand souls, have assumed and still continue to assume in their seals or in official letters the name of chalïfah, although many of them are, at present at least, ignorant of the real meaning of the title. The exponents of the law in such countries though they may through fear or complacency acquiesce in the prevailing custom, cannot of course regard such misuse of this and similar titles as anything else than absurd and unlawful exaggeration.

Nevertheless the law of Islam in its later development has turned jts attention to these independent rulers of distant countries. Once admitted that a de facto sovereign who professes the Moslim faith should bc obeyed for the sake of maintaining order in secular matters, it was found impossible to exclude such petty princes from the universal harmony of Islam. These numerous rulers of outlying principahties could not be regarded as delegates of a central authority which never intcrfcrcd in their affairs and in many cases was unable so to interfere, were it only by reason of the increasing power of the nonMohainmedan countries. To constitute such a delegation, express or even verbal authorization or appointment would have been deemed necessary. Accordingly they were called "potentates" ') and it was taught that they must be obeyed so far as the limits of their power extended, and within their own boundaries they were assigned tlie same junsdiction as that held by the supreme lord within the dominions actually subject to him.

o;~ T° summarize: 1,1 Purc'y religious matters the law abated no tittle »al faculty in °f 'ts stringent requirements. Of what in our estimation lies outside the 'tatccraft.0 ^ SPherc üf re%ion thc law held domestic life most closely under its control. In every otlier department it has maintained its impracticable theories, although it admits that a Mahdi is required in order to carry them out in all their fulness. Only in statecraft and all that appertains thereto has it supported without reservation the dc facto position; and tliis it has done by annexing to its own detailed and consistent doctrine a codicil which deprives that doctrine of all effect. This has been brought about by the power of the sword; even in its own domain the teaching of Islam bows before superior force only.

means "thorn is also used to signify the keenness and strength of weapons and, in a metap ïorical sense, dc facto power, no matter whence or how it may arise.