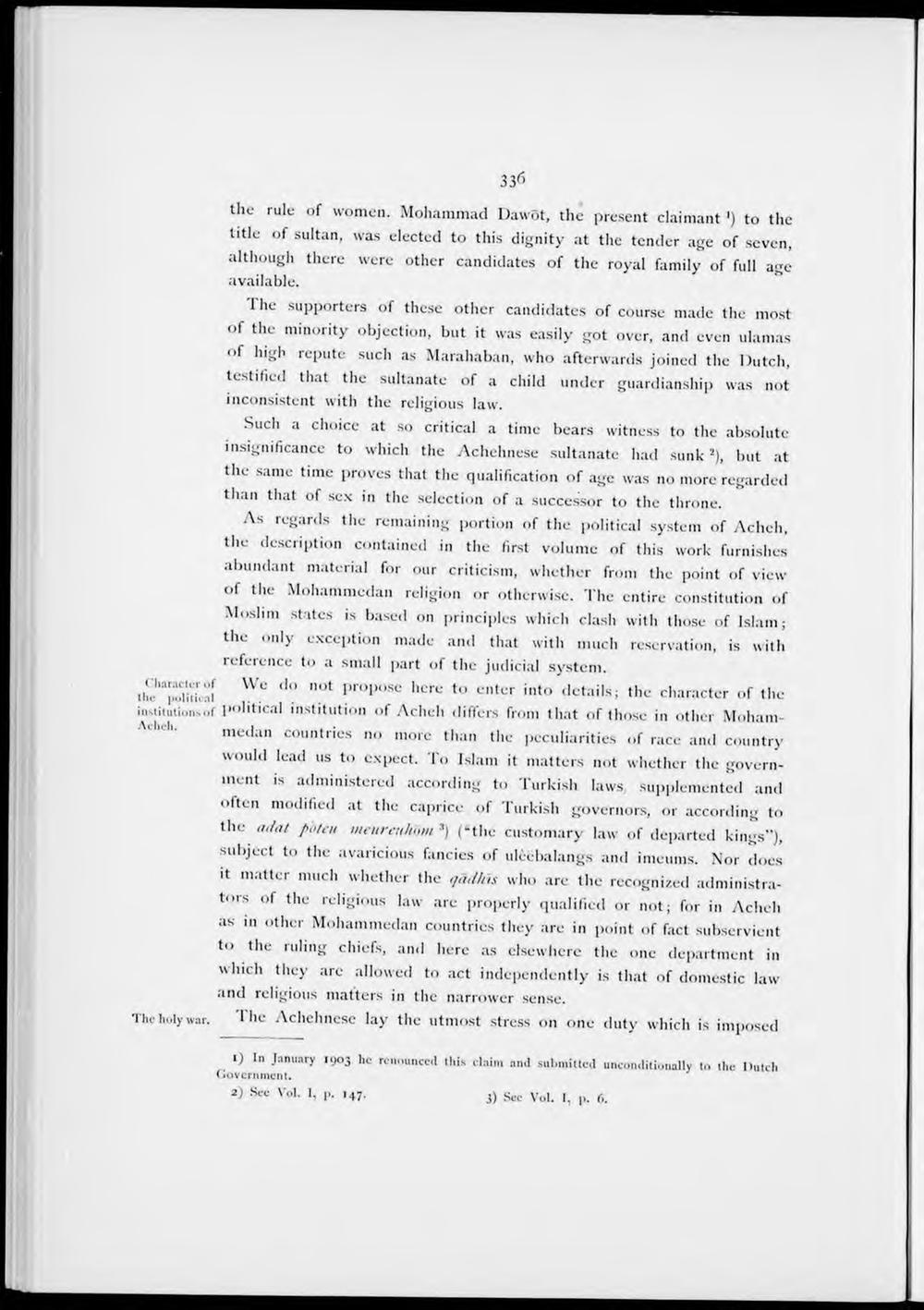 the rule of women. Mohammad Dawöt, the present claimant ') to the title of sultan, was elected to this dignity at the tender age of seven, although there were other candidates of the royal family of full a"e available.

Ihe supporters of these other candidates of course made the most of the minority objection, but it was easily got over, and even ulamas of high repute such as Marahaban, who afterwards joined the Dutch, testified tliat the sultanate of a child under guardianship was not inconsistent with the religious law.

Such a choice at so critical a time bears witness to the absolute insignificance to which the Achehnese sultanate had sunk2), but at the same time proves that the qualification of age was no more regarded than that of sex in the selection of a successor to the throne.

As regards the remaining portion of the political system of Acheh, the description contained in the first volume of this work furnishes abundant material for our criticism, whether from the point of view of the Mohammedan religion or otherwise. The entire constitution of Moslim states is based 011 principles which clash with those of Islam; the only exception made and that with much reservation, is with reference to a small part of the judicial system.

th?apoHt'ical We d° "0t propoSe here to enter into details; the character of the institutionsof political institution of Acheh diflers from that of those in other Mohammedan countries no more than the peculiarities of race and country would lead us to expect. To Islam it matters not whether the government is administered according to Turkish laws, supplemented and often modified at the caprice of Turkish governors, or according to the adat poten meurenlwm s) ("the customary law of departed kings"), subject to the avaricious fancies of ulèëbalangs and imcums. Nor does it matter much whether the qddhïs who are the recognized administrators of the religious law are properly qualified or not; for in Acheh as 111 other Mohammedan countries they are in point of fact subservient to the ruling chiefs, and here as clsewhere the one departmcnt in which they are allowed to act independently is that of domestic law and religious matters in the narrower sense.

The holy war. 1 he Achehnese lay the utmost stress 011 one duty which is imposed

1) In January 1903 he renounced this claim and submitted unconditionally to the Dutch Government.