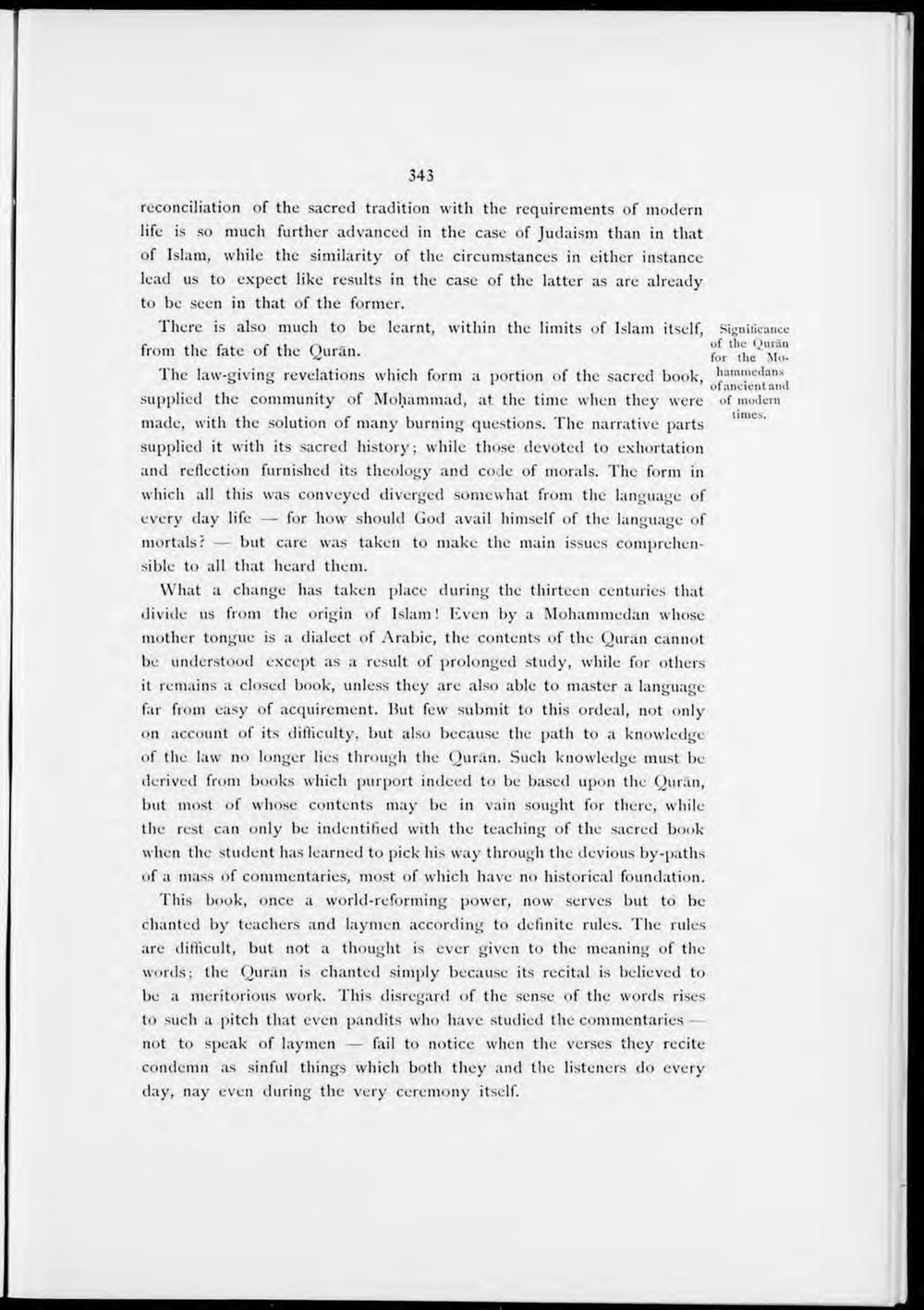 reconciliation of the sacrcd tradition with the requirements of modern life is so much further advanced in the case of Judaism than in that of Islam, while the similarity of the circumstances in either instance lead us to expect like results in the case of the latter as are already to be secn in that of the former.

There is also much to be learnt, within the limits of Islam itself, Significance from the fate of the Quran. fo/'the^Mo"

The law-giving revelations which form a portion of the sacrcd book, hammedans

supplied the community of Mohammad, at the time when they were of modem made, with the solution of many burning questions. The narrative parts limcssupplied it with its sacred history; while those devoted to exhortation and reflection furnished its theology and code of morals. The form in which all this was conveyed diverged somewhat from the language of evcry day life — for how should God avail himself of the language of mortals? — but care was taken to make the main issues comprehensible to all that heard them.

What a change has taken place during the thirteen centuries that divide us from the origin of Islam! Even by a Mohammedan whose mother tongue is a dialect of Arabic, the contents of the Quran cannot be understood except as a result of prolonged study, while for others it remains a closed book, unless they are also able to master a language far from easy of acquirement. Hut few submit to this ordeal, not only on account of its difticulty, but also because the path to a knowledge of the law no longer lies through the Quran. Sucli knowledge must be derived from books which purport indeed to be based upon the Quran,

but most of whose contents may be in vain sought for there, while the rest can only be indentified with the teaching of the sacred book when the student has learned to piek his way through the devious by-paths of a mass of conimentaries, most of which have no historical foundation.

This book, once a world-reforming power, now serves but to be chanted by teachers and laymen according to definite rules. The rules are diflicult, but not a thought is ever given to the meaning of the words; the Quran is chanted simply because its recital is believed to be a meritorious work. This disregard of the sense of the words rises to sucli a pitch that even pandits who have studied the conimentaries —

not to speak of laymen — fail to notice when the verses they recite condemn as sinful tliings which both they and the listeners do every day, nay even during the very ceremony itself.