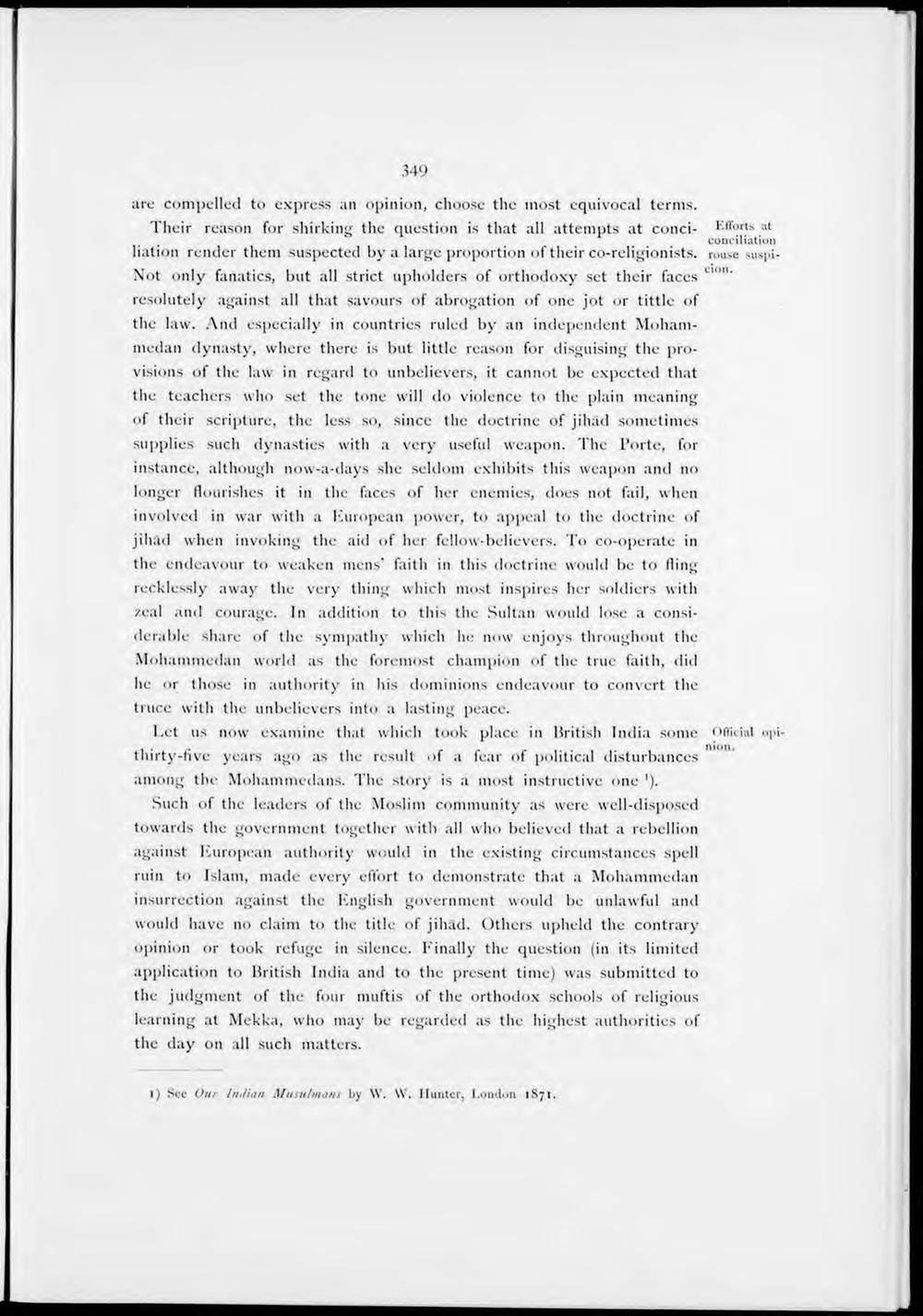 are compelled to express an opinion, choose the most equivocal ternis.

liation render them suspected by a large proportion of their co-religionists. r»»se suspiNot only fanatics, but all strict upholders of orthodoxy set their faces L'°"' resolutely against all that savours of abrogation of one jot or tittle of the law. And especially in countries ruled by an independent Mohammedan dynasty, where there is but little reason for disguising the provisions of the law in regard to unbelievers, it cannot be expected that the teachers who set the tone will do violence to the plain meaning of their scripture, the less so, since the doctrine of jihad sometimes supplies such dynasties with a very useful weapon. The Porte, for instance, although now-a-days she seldom exhibits this weapon and no longer flourishes it in the faces of her enemies, does not fail, when involved in war with a European power, to appeal to the doctrine of jihad when invoking the aid of her fellow-believers. To co-operate in the endeavour to weaken mens' faith in this doctrine would be to fling recklessly avvay the very thing which most inspires her soldiers with zeal and courage. In addition to this the Sultan would lose a considerable share of the sympathy which he now enjoys throughout the Mohammedan world as the foremost champion of the truc faith, did he or those in authority in his dominions endeavour to couvert the truce with the unbelievers into a lasting peace.

Let us now examine that which took place in British India some Official opithirty-five years ago as the result of a fear of political disturbances among the Mohammedans. The story is a most instructive one ').

Such of the leaders of the Moslim community as were well-disposed towards the government together with all who believed that a rebellion against European authority would in the existing circumstances spell ruin to Islam, made every effort to demonstrate that a Mohammedan insurrection against the English government would be unlawful and would have 110 claim to the title of jihad. Others upheld the contrary opinion or took refuge in silence. Einally the question (in its limited application to British India and to the present time) was submitted to the judgment of the four muftis of the orthodox schools of religious learning at Mekka, who may be regarded as the highest authorities of the day 011 all such matters.